Wagons West: (The Cowan Family Saga - Book 1) and millions of other books are available for Amazon Kindle. Learn more 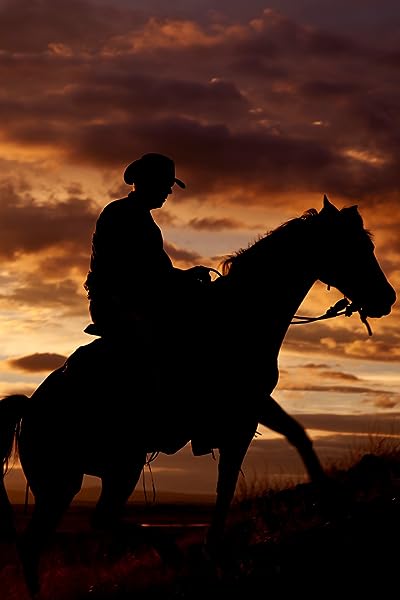 by Russell J. Atwater (Author)
4.1 out of 5 stars 944 ratings
Book 1 of 3: The Cowan Family Saga
See all formats and editions
Sorry, there was a problem loading this page. Try again.

He was a greenhorn but didn’t know it.

When Bruce Cowan takes his family and flees Boston to homestead out west, he figured the journey to California to be long but safe. Their first day out reveals how wrong he is and the perilous dangers of the Santa Fe Trail.

It would have been a massacre but for Trent and Pat MacLeod.

Trent favors a Sharps .50 caliber buffalo rifle, while his younger brother Pat packs two Texas Navy Colts. They both prove deadly and a force to be reckoned with.

The Cowans and the McLeod brothers’ forge a bond those first few days, sustained in part by Trent’s attraction to the eighteen-year-old Becky Cowan. His overtures are not returned.

The brothers join the Cowans on their hazardous journey west as they face harsh conditions, bandits and Indian attacks. Will their oxen survive the trip? Will the man Bruce Cowan is fleeing catch up with them? Should they take the Cimarron Cutoff through the desert or stick with the Santa Fe Trail through the mountains?

Even with the help of Trent and Pat, the Cowans are forced to learn quickly to survive the rigorous demands of the Wild West.

Page 1 of 1 Start overPage 1 of 1
Previous page
Next page
Start reading Wagons West: (The Cowan Family Saga - Book 1) on your Kindle in under a minute.

Russell J. Atwater grew up in the mid-west enjoying a steady diet of Gunsmoke, Bonanza and The Rifleman. A lover of western genre fiction, his passion is to write stories that celebrate life in the old west with the old-fashioned values of honesty, loyalty and righteousness.

for JJ
4.0 out of 5 stars Realistic, honest depiction of early settlers trials moving West
Reviewed in the United States on June 3, 2020
Verified Purchase
Having been raised in the West by a father born in1885, I heard a lot of stories about trials and survival. Even though there was a little artistic license occasionally, I thought this story had enough excitement, danger, fighting , and risk to keep any reader interested with a little romance & humor thrown in to lighten the mood Enjoy, I did.
Read more
23 people found this helpful
Helpful
Report abuse

Howell
5.0 out of 5 stars Wagon Train on steroids!
Reviewed in the United States on May 5, 2020
Verified Purchase
The action never stops! The Cowans get out of one mess with the aid of Trent and Pat only to end up in another pickle. Trent and Pat are men to ride the river with if you are a good guy, but if you are an outlaw they are devils with six guns. They kick butt and take names! The Author is on a roll! This is the fourth great western he has written!
Read more
18 people found this helpful
Helpful
Report abuse

Paula
VINE VOICE
5.0 out of 5 stars Great wagon train western
Reviewed in the United States on June 30, 2020
Verified Purchase
This is a new to me author. Loved this book and the style of writing. A very fast paced book with lots of trail gangs, Indians and crooked wagon train bosses. This book had it all including a coming of age story of a 15 year old, from Boston. Throw in a beginning of a love story and this is Wagons West, in a nutshell. Can't wait to read the next book in the Cowan Family Saga.
Read more
13 people found this helpful
Helpful
Report abuse

Patsy Chastang
4.0 out of 5 stars An Amazing Story of Our History
Reviewed in the United States on February 15, 2021
Verified Purchase
This is an action packed novel full of surprises. A trip from Boston to Independence on to California. Bruce Cowan, his wife, Lois, with their two teen-agers, Betsy and Wesley. This is a rough and brutal ride for the family. This beautiful family joined a Wagon Train going West.

The owner of the wagon train hired two gunman to travel with the train for protection. Trent is a sharp shooter with his Sharps .50 caliber rifle and Pat is a fast draw with his two Colt pistols. They are brothers, they don't look alike or think alike. There is a light clean romance going on between Trent and eighteen-year-old Betsy Cowan.

This book is filled with twists and turn and adventures at every turn. The journey going West had always faced difficulties and bad conditions, rains, mud, turned over wagons. Way out on the Santa Fe trail anything could happen and does. A very hazardous journey with bandits, Indian attacts, wild animals, fires, snakes and horse stealing. Then serious decisions had to be made should they take the Cimarron Cutoff through desert or go with Santa Fe Trail through the mountains and maybe get caught in a snow storm.

There was numerous battles between Indians, bandits and the settlers which resulted in both sides being wounded, gunshot, burying the dead. This kept my interest and I will check the next book in the series. This is our country's history. I encourage everyone to find a good book and read.
Read more
2 people found this helpful
Helpful
Report abuse

Sarah White
5.0 out of 5 stars What a Great Start on a Series!
Reviewed in the United States on September 19, 2020
Verified Purchase
The Cowan Family left Boston to keep a gangster from marrying the daughter of the family. Knowing that the gangster would follow them, they traveled as far and as fast as they could. They purchased everything they need to travel the Santa Fe trail. Unfortunately, the trail boss they signed on with was more interested in making a huge profit and was not at all concerned about getting the settlers safely to their destination. With all the action the first book in his series was a quick, interesting read. I have the second book ready to go on my Kindle. More to come later today with Book 2 of this series. Stay tuned.
Read more
3 people found this helpful
Helpful
Report abuse

CranberryLyme
5.0 out of 5 stars Santa Fell trail to California?
Reviewed in the United States on January 22, 2022
Verified Purchase
I enjoyed this story, which is mostly clean (because of gun play violence) I will read the next in the series, but this is why I gave 4 star's
- I'm A historian, and there are some parts that don't ring quite true. Most readers wouldn't notice them, I am just picky about history.
-Not even Bat Masterson, the Ego brothers with Wild Bills together killed as many as young Trent and Pat did in a few days...and feel no remorse about any of the dead

Bonnie T
5.0 out of 5 stars Amazing, Fast paced
Reviewed in the United States on February 27, 2022
Verified Purchase
This book in my opinion deserves a 10, I am thoroughly enjoying it. Constant action, a real page turner. I could picture every scene, every battle. I even felt anger at the bad guys for trying to take what wasn't theirs. I love westerns and especially books that tell of the trials of coming west. This is one of the best books I've read in a long time and will immediately continue on to book #2. My special thanks to author Russell Atwater for an incredible book, thank you for sharing your talent with us. This 68 year old Grandma will be a lifetime fan. Thanks again.
Read more
Helpful
Report abuse

Paul M. Harman
VINE VOICE
4.0 out of 5 stars Wagons West - book1
Reviewed in the United States on July 4, 2020
Verified Purchase
The story is about the Cowan family and their trek west. I guess it shows how unprepared and naive so many were that immigrated west. Many didn’t make it because of hostile tribes and bandits preying on wagon trains and their total lack of knowledge of the dangers and hardships. An interesting story with quite a few characters. Some believable, some not.
Read more
4 people found this helpful
Helpful
Report abuse
See all reviews

Tom hetherington
5.0 out of 5 stars I really liked the style of writing
Reviewed in the United Kingdom on February 2, 2022
Verified Purchase
I love the story line
Read more
Report abuse
See all reviews