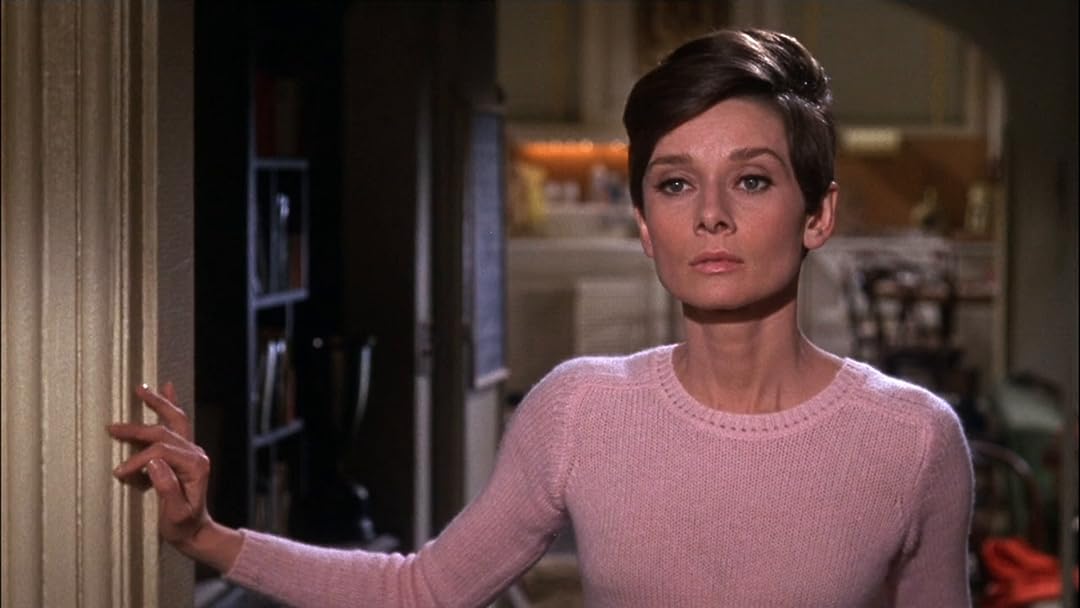 (1,968)7.81 h 47 min1967X-RayNR
Audrey Hepburn portrays a photographer's blind wife who is trapped in her apartment by an evil trio, ready to murder her to retrieve a heroin-filled doll hidden in her apartment.

Made In The USA Reviewed in the United States on October 25, 2020
4.0 out of 5 stars
Wait Until Dark - DVD - Review - Audrey Hepburn shines in Psychological Thriller
Verified purchase
4 stars overall for this Psychological Thriller movie from 1967. A better director would have made Wait Until Dark a 5 star movie.
.
5 stars for the incomparable Audrey Hepburn portraying recently blind Susy Hendrix.
.
.
4 stars for Alan Arkin portrayal of criminal Roat.
3 stars for Richard Crenna portrayal of criminal Mike Talman.
.
2 stars for Jack Weston portrayal of criminal Carlino
2 stars for Julie Herrod portrayal of teenage neighbor Gloria.
2 stars for Efrem Zimbalist Jr. portrayal of husband Sam Hendrix.
.
.
Synopsis :
.
Recently Blinded woman is Terrorized by 2 Con Artists and 1 Psychopathic Killer, while they Scheme to Search the woman's apartment for a Doll containing Heroin.
.
.
Holes or Issues in this Psychological Thriller movie :
.
Susy Hendrix was Blinded by a Fire from a Car Accident one year earlier. But there are No Burn Scars on Susy's Face and Susy Eyes do Not show Signs of Trauma.
.
Susy Hendrix was Blind but was Able to Smell Cigarette Smoke from the Criminals. But she was Mysteriously Unable to Smell the Dead woman's Perfume and Decaying body, which was hanging 6 inches from Susy.
.
Movie does Not explain why Susy Hendrix front Door was Unlocked. She was Blind and Alone, so the door should have been Locked for Safety.
.
Susy Hendrix was too Trustworthy and Naive for a person who was Recently Blinded. She mysteriously and instantly Trusted stranger Mike Talman, who suddenly just Walked right thru her Unlocked front Door.
.
Susy Hendrix mysteriously Fails to instruct Gloria to Call the Police from Gloria's apartment.
.
The criminal Roat was Bleeding to Death after being Stabbed. But yet he Mysteriously was able to Leap/Lunge several feet across the room and grab Susy Hendrix ankle.
.

chancellor1Reviewed in the United States on February 15, 2021
3.0 out of 5 stars
Decent movie, indecent price
Verified purchase
I bought this blu-ray disc because it is an Audrey Hepburn movie for which she earned an Academy Award nomination and I had not seen this movie before. After watching it, I don’t think it is worth the $14 that I paid for it. The movie on the disc didn't look like it was remastered and the disc only had 2 theatrical trailers and one featurette. About the movie, I thought the movie was a decent suspense/thriller, but I was annoyed early on that the apartment didn't have a better lock on her door and strangers could enter a blind woman's apartment. Audrey did do a good job of playing a blind woman and made the second half of the movie much more intense than the first. Being a movie that relies on suspense, it loses some punch once you have seen the movie so I won't be watch it as frequently as I would other Audrey Hepburn movies. I would have rated the disc higher if it was priced less than $9, which is the price for Breakfast at Tiffany's, Funny Face and Sabrina—movies that I do enjoy watching again and again.

KayBeeReviewed in the United States on March 23, 2018
5.0 out of 5 stars
Love, Love, Love Audrey Hepburn
Verified purchase
I remember watching this movie a long time ago when I was younger and re-watched it recently. I love Audrey Hepburn. She is awesome and so cute. She did a phenomenon job portraying a blind woman in this movie. I couldn't believe the lengths the criminals in this movie would go through just to get a stupid doll from a blind lady. I hated how they harassed her but it still turned out to be a good movie. Alan Arkin also did a wonderful job as the villain because I hated him so much, lol.
7 people found this helpful

DarianDodsonReviewed in the United States on March 6, 2020
3.0 out of 5 stars
Great idea but time has weathered it
Verified purchase
Not Rear Window quality but a good attempt at making a different kind of thriller. I'm sure in its day this was novel and thought provoking but now... Well it becomes somewhat silly with it's rotating door of characters - and I mean characters - coming and going in this one location film. The real reason it works at all is the calm charismatic charm that Audrey Hepburn projects. She's just great to watch. So for that reason - and its a "classic" modern filmmakers will most likely steal from) I'd recommend a viewing.

SuperSonicManReviewed in the United States on September 16, 2011
5.0 out of 5 stars
Suspense at it's best
Verified purchase
I remember watching this movie when I was about 12 or 13 at home on cable. I was alone , it was nighttime and it scared the s__t out of me. It is not a slasher movie so if that's what you're looking for, look elsewhere. It's more of a psychological suspense movie than anything else.
Audrey Hepburn plays a blind woman who's husband has inadvertently come home with a doll full of heroine. The guys who are looking for it are right around the corner, and start devising a plan to get it. Now I believe the movie works so well because of Hepburn, you BELIEVE she is blind, there is no "Oh, that's Audrey Hepburn playing a blind girl", no way, she IS blind. And her character is so likable that you find yourself screaming at the screen, "Get the HELL out of there!" was a phrase I remember repeating that night so many years ago. Alan Arkin and Richard Crenna as two of the three bad guys were superb, one cool and collected, the other a simmering pot of slimy oil just about to go up in flames. There is also a little girl that lives upstairs that you want to strangle or at least hope the drug dealers take her ; ) But my least favorite character is Audrey's husband, he is such an insensitive ass that you wonder why she doesn't just leave him. I know about tough love but the guy is a pain. I remember feeling this when I was a kid and when I watched it again the other day I felt the exact same thing. But maybe because he is such an idiot it just makes you want to root for Audrey's character even more. By the end you are so invested in her and her plight that you are just jumping in your seat trying your best to will her out of there.
I believe to get the best effect this movie must be watched in a completely dark room and let yourself get immersed in the atmosphere, you'll have a frightening good time.
28 people found this helpful

KayReviewed in the United States on October 6, 2019
2.0 out of 5 stars
I waited all these yours for this?
Verified purchase
I give it two b/c it wasn't horrible, but the plot holes just swallow up the movie, like a sink hole takes a house. Why didn't Suzy send the Gloria to get the police? LAME. Also, after Suzy is clued in that they want the doll, why not just give it to them since she was already starting to feel spooked? I have been aware of this movie since I was a kid (46 now) and finally thought I"d give it shot for my annual October Fright Fest. Or Thriller Theater. Or Suspence Showings. This movie wasn't even suspenseful! I actually wanted to quit early on, but didn't want to waste my $3, lol.

And for a blind lady, Suzy was sure-footed every time she walked up and down those kitchen stairs, never hestitating to find them AT ALL. Sigh. Better luck with a movie next week.
One person found this helpful

OwenisticReviewed in the United States on November 1, 2020
4.0 out of 5 stars
Great Film (If You Ignore the Plot Holes)
Verified purchase
I wasn't that familiar with Audrey Hepburn and became a fan. I was intrigued by her acting as Susy Hendrix. The film offers a clever premise and an interesting glimpse into the mid-60s. I know those were simpler times, but I don't think people were as naive as Susy Hendrix. Some common-sense precautions would have saved her a lot of trouble. But this film is best viewed without a cynical or questioning eye. Just accept the premise and enjoy the suspense.

Satisfied CustomerReviewed in the United States on May 16, 2021
5.0 out of 5 stars
Still one of the most suspenseful films in memory
Verified purchase
You worry so much for Audrey Hepburn not just because she's blind, but because she's so delicate that you can't imagine how she would defend herself against an intruder. The story had some twists and I remember, since childhood, that this film had me biting my nails up to the end. A very different role for Audrey and a good one. Alan Arkin, of course, was great.
See all reviews
Back to top
Get to Know Us
Make Money with Us
Amazon Payment Products
Let Us Help You
EnglishChoose a language for shopping. United StatesChoose a country/region for shopping.
© 1996-2021, Amazon.com, Inc. or its affiliates