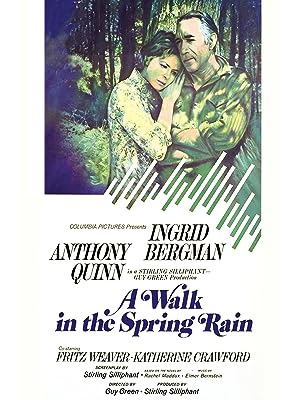 A Walk In The Spring Rain

(106)6.21 h 38 min1970PG
A middle-aged woman (Ingrid Bergman) is the wife of a university professor (Fritz Weaver) who is on sabbatical. She meets Cade (Anthony Quinn), a farmer, a mechanic, a handyman; he is uncomplicated, brimming with vitality and the opposite of her husband. Their affair is brief and cascading and when her husband's sabbatical is over, the woman is beset by conflict.

Carlos S. KamberReviewed in the United States on November 25, 2019
1.0 out of 5 stars
dvd doesn't work
Verified purchase
first copy arrived did not play in pc or dvd player. I got replacement very quickly, that one didn't work either. These are advertised as DVD with no region code. I am concerned that these are unauthorized copies and I want my original payment refunded to me asap.
3 people found this helpful

LJSReviewed in the United States on December 8, 2018
5.0 out of 5 stars
Good story; mesmerizing actress
Verified purchase
This film has an engaging plot line, even if it's not terribly creative. The best thing about it is Bergman's acting and face, which is so expressive and beautiful, even as she was aging. I also found Quinn to be believable as the Appalachian Mountain man, and I gained new respect for his acting skills. The only element of the film I found hard to swallow was Fritz Weaver as Bergman's husband--he's so mediocre-looking and his character is so boring, I wasn't convinced that Libby would have ever married him in the first place, let alone stay married and faithful to him for decades.
2 people found this helpful

Peaches in AlabamaReviewed in the United States on March 12, 2020
1.0 out of 5 stars
I should have paid attention to previous reviews
Verified purchase
I hoped this DVD would work. It does not work in my DVD player. Description said it would work in all regions. There were two other reviews stating the same thing. This goes back the next day. I'm not taking a chance on a second one because another reviewer tried that and it still did not work. Would have given zero rating if it were possible. This is very deceiving.
One person found this helpful

Fjskkxj dbxjReviewed in the United States on August 24, 2019
1.0 out of 5 stars
Piece Of Crap
Verified purchase
Paid $17 freaking dollars and $.49 for this damn movie that I’m dying to see and it don’t work in any of our DVD players nor on our computer.. just loads a blank disc asking me to save files to it!! Start the return process and amazon offers to send me another one on the terms that I send the first one back and the SECOND ONE DOESN’T WORK EITHER!!! Really aggravated!! It only got one star because I had to put one to post this review!
3 people found this helpful

secret writerReviewed in the United States on October 10, 2019
5.0 out of 5 stars
One of the best movies ever!
Verified purchase
The book, "A Walk in the Spring Rain" is my favorite book of all time, and I was delighted to find the movie, which I seen only once a long time ago. The movie is not as good as the book but it's still quite wonderful.
2 people found this helpful

Books McGulliganReviewed in the United States on January 24, 2016
5.0 out of 5 stars
Great vintage fashions
Verified purchase
A moving film that takes you by surprise. Both actors are exceptional, honest, vibrant, attractive and highly skilled. A realistic situation and breathtaking, smoky mountain setting that is pure and green as spring. I was moved.

Great vintage fashions...and a taste of Tennessee culture. Quinn is a bit uneven as a southern man but his emotions are believable.

If you love the beauty of Ingrid Bergman you will see quite a bit of her looking spectacular. The director loved her.

Elie MamiehReviewed in the United States on February 1, 2001
3.0 out of 5 stars
The pairing of Bergman and Quinn
Verified purchase
I must disagree with what Maltin wrote in his summary, about expecting much more from the cast. I think Bergman and Quinn did a fine job with the script that they were given. The pace was a bit slow in certain scenes, but that was the whole idea, since most of the story was taking place in the Tennessee mountains where everything is quite and serene. When the title indicated that Bergman was paired off with Quinn for this drama, I wasn't certain if Quinn would be the best match to act opposite Ingrid. However, after watching the entire movie, one gets to realize that he was perfect for the role and appreciate him even more. And even if I took a wild guess now, I wouldn't be able to pick a different actor that could portray Will Cade better than Quinn did. I highly recommend viewers to give this movie a chance.
18 people found this helpful

DuchessReviewed in the United States on March 21, 2021
3.0 out of 5 stars
Slow story
Verified purchase
I liked the acting...Ingrid Bergman and Anthony Quinn...wonderful chemistry, sadly wasted on a mediocre story...
See all reviews
Back to top
Get to Know Us
Make Money with Us
Amazon Payment Products
Let Us Help You
EnglishChoose a language for shopping. United StatesChoose a country/region for shopping.
© 1996-2021, Amazon.com, Inc. or its affiliates