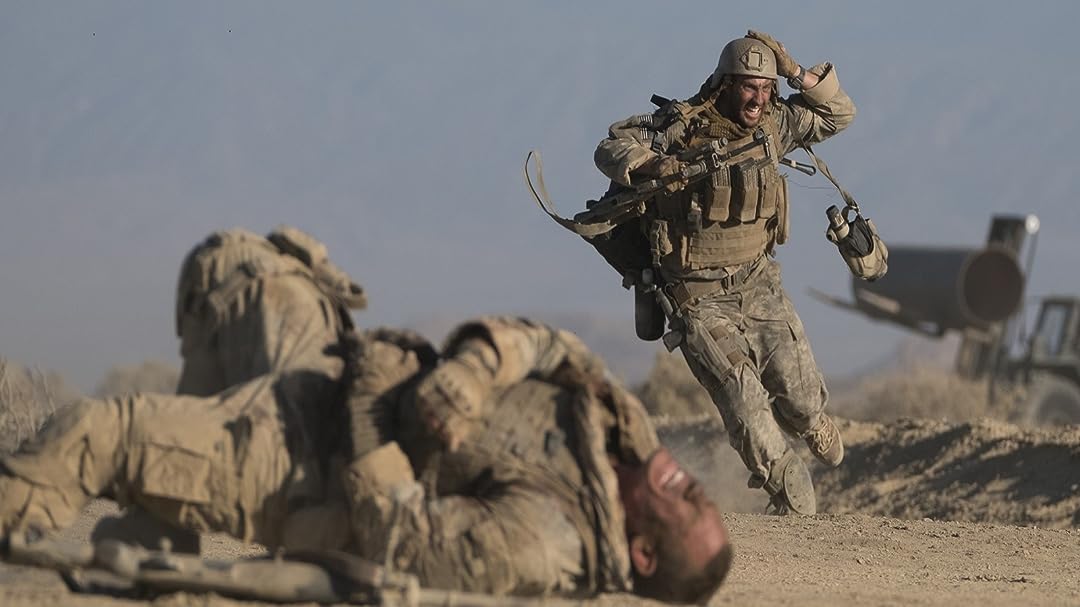 (1,901)6.21 h 29 min2017X-RayHDRUHDR
A deadly psychological thriller that follows two soldiers pinned down by an Iraqi sniper, with nothing but a crumbling wall between them.

The Mad MurfReviewed in the United States on January 14, 2018
2.0 out of 5 stars
Decent enough, but its mounting sins plus the ending killed it.
Verified purchase
I try to sit aside my nitpickiness regarding military protocols when watching this type of movie, having been in the Army for a number of years. There are definitely some glaring mistakes in that respect; with the weapons, the beyond-super-human accuracy of the enemy, the magical enemy radio that has access to everyone else's encrypted frequencies. But I won't complain anymore about that, let's move on.

90% of this movie is about two characters: Isaac and Juba. Sadly, by the end, I felt that Juba was underdeveloped. Sure, we learned a little bit about him, but having finished this movie maybe 20 minutes ago, I can barely remember any of it.

Overall, this movie was teetering on 3.5-4 star range until the end. The plot doesn't really make sense, but it's passible enough for a purely entertainment type of movie ("construction guys call for security detail. Security calls for us, and I call for them." Really? No one's putting this together? I mean, it must be Juba giving the OK to the civilians' bosses and the security teams bosses (like he's doing with Isaac when Isaac realizes it) and then calling for support from the next level. Otherwise, people would start noticing that the team that called for help isn't responding, and the team sent to actually help isn't responding. Okay... that's a shaky enough plot, but I'll roll with it (again, despited ALL of the technological issues involved with that). But no one notices that their teams aren't returning? How many times can Juba say "Yup, everything's okie dokie," before someone realizes that there's no reason for them to be gone that long? Also, Isaac's antenna was broken and got replaced. So now he can hear but can't transmit? Convenient improbable radio problem #2.

And then there's the ending... Isaac knocks over the wall and Juba starts shooting at him. Juba must be missing on purpose to get Isaac to fire back so that Isaac will think he killed Juba. Otherwise, Isaac would just tell everyone to light up the trash pile. Okay, again, kind of shaky logic and extremely risky for Juba because Isaac would DEFINITELY just tell everyone to shoot the trash pile anyway. There is literally no reason not to. "Huh.. I'm pretty sure I shot the bad guy. Not totally sure, because I can't see a body. But sort of sure, so I'll just assume that everything's fine." No. Also, didn't Isaac very specifically say that his last partner died while trying to confirm a kill? So Isaac just says "F*#k it, he's probs dead, no need to confrim."

Also, kind of convenient that neither helicopter had A: mounted weapons or B: a security escort. Because why would you want to be able to return fire in a combat zone? Oh yeah... Juba would get killed and the movie would have ended differently. Or Juba would have to let the helicopters go and wouldn't be able to shoot them down.

Oh look, Juba has the pilots encrypted frequency and is responding back to base......
87 people found this helpful

New YorkerReviewed in the United States on September 4, 2018
1.0 out of 5 stars
Worst movie ever!
Verified purchase
This movie was about how many times a solider can say the F word, period! Let's just glorify the enemy, shall we? Please, please tell me Nicholas Irving didn't consult on this! The only reason I watched it was because I read he did. In an 89 minute film the only uplifting minute was then shot out of the sky. No uplifting moments in war, you say? Then what's the point to make a film about it? It's not entertaining and I doubt it will win over any potential recruits. If you want to know about snipers you'd do better to read Nicholas Irving's books.
44 people found this helpful

Phillip TReviewed in the United States on January 3, 2018
1.0 out of 5 stars
Disappointment
Verified purchase
Let down. I should have read the reviews before hand. Amazon has a long way to catch up to the other online competition if this is what they are going to continue to produce.
57 people found this helpful

JasonReviewed in the United States on December 8, 2017
1.0 out of 5 stars
Pyschological thriller, minus the logical
Verified purchase
When you wake up one day and say "Hey, I want to make a military movie!" and proceed to make a movie without doing any research! Did they even hire a consultant...? If you've never seen a military movie before you might find this entertaining. If you appreciate movies that put the effort into research and consulting, it will make you facepalm repeatedly. I don't know what's worse, John Cena's bolt action M24 rifle that shoots like it's semi-automatic, or the enemy sniper with super human accuracy from a 7.62 NATO rifle. If you're going to make a big deal about a bullet caliber in a movie, at least google the round first. If you did, you would realize that the longest confirmed kill with the round is 1375 meters, but the entire movie takes place beyond 1500 meters. Also, the soldier who made that shot even described it as a one in a million shot. At the end I actually had to ask myself if I just watched pro terrorism propaganda. Thankfully it's "free" with a Prime membership
214 people found this helpful

Brandon LarsenReviewed in the United States on December 27, 2019
1.0 out of 5 stars
Political Agenda Alert.
Verified purchase
The psychological thriller part was accurate. I would give the psy-thriller aspect a 3 star. The ending though was the worst that I have ever seen and was a complete waste of time. Even if he did hit the enemy in the end, it would be an ok ending.

The political agenda aspect was super biased and inaccurate. There is no way that the enemy shooter was as good as he claimed to be. And the middle east is a complicated area. You cannot sum up the politics and war effort only as "there is oil and the middle east is being invaded by the west."

You have to take into consideration that the war is not simply a bilateral war between the middle east and America. Take America out and the Russians or Chinese go in. Both Russia and China have meddled with and corrupted middle eastern countries. Not to mention that there have is corruption within their own governments.

I wish people would stop thinking that it is as simple as Americans are 100% responsible for the chaos in the middle east.
18 people found this helpful

PrimeMemberReviewed in the United States on March 16, 2018
1.0 out of 5 stars
Terrible.
Verified purchase
Every movie requires the suspension of disbelief. This more than usual. How can the hajj hit a water bottle, antenna, and a specific bleed-out spot on the leg, but can't lights-out the sniper (cena) with a few shots? Moreover, the ending is just appalling. Why would any decent movie end like that -- just stupid, plain and simple. It's a pity, though, because the psych-thriller part was decent.
28 people found this helpful

OratuReviewed in the United States on November 5, 2017
2.0 out of 5 stars
Great potential, but no follow through
Verified purchase
Great potential, but no follow through. The suspense and set up to the plot was great. The ending had no credibility, no story, no plot. To end the way it did, they would need a humanized antagonist, instead we know nothing of the person. Also, and I have never served in ground forces combat, immediately I saw flaws in the movie. Why is the sniper going down to investigate, at WORST, the spotter should have been. Also, as has been brought up numerous comments before, why are they out of radio contact with support? And, as has been brought up in the movie itself, the sniper is too accurate, and the choppers would fly in and out the same path, not over the trash, toward potential enemy fire. Want to watch a GOOD sniper movie, watch Enemy at the Gates. I am disappointed in this in particular, because I pay for Amazon Prime, and this is supposed to be an example of a good production from their independent productions. Not good.
23 people found this helpful
See all reviews
Back to top
Get to Know Us
Make Money with Us
Amazon Payment Products
Let Us Help You
EnglishChoose a language for shopping. United StatesChoose a country/region for shopping.
© 1996-2021, Amazon.com, Inc. or its affiliates