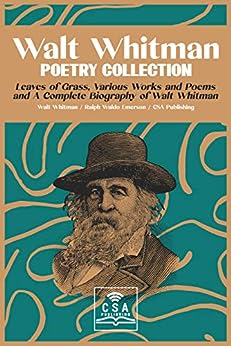 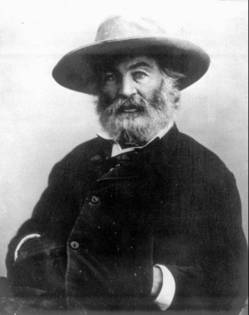 Five works in one collection - Also available for paperback

Written as a compilation of poems in the mid-1800s celebrating humanity, the value of the human mind, and nature. These poems in this collection were heavily inspired by Ralph Waldo Emerson, himself a romantic, and the Transcendentalist Movement that was popular at the time. While most of the poems offer praise to nature and a person’s relative role in it, the title itself, Leaves of Grass, is a pun minimizing the value of the very paper that they were written on.

The very complex relationship between Emerson and Whitman was publicly displayed in open letters that they had scribed to one another. Emerson, enthusiastically welcoming Whitman to his great career, made a very public proclamation of awe-inspiring praise to the poet.

Written about the death of President Abraham Lincoln, this poem emphasizes the grief and sorrow felt by the American people in the throes of mourning upon his assassination. The Civil War influenced Whitman’s and his poetry.

Work 4: When Lilacs Last in the Dooryard Bloom’d by Walt Whitman

Written in the summer of 1865 during the country’s profound national mourning over the assassination of President Abraham Lincoln, this poem was a pastoral elegy referencing the recently concluded Civil War. Whitman uses imagery and symbols to describe the president, his death, and the emotional experience.

Work 5: A Complete Biography of Walt Whitman by CSA Publishing

Walt Whitman, a 19th Century American journalist, and poet was considered a Unionist with many of his works, written in free verse, revolving around the events and experiences of the Civil War. His awareness of suffering, grief, and revulsion are apparent in many of his later prose and public viewpoints. His published works and collections were praised by poet and essayist Ralph Waldo Emerson as “being of extraordinary wit and wisdom.”

Walt Whitman was born on May 31, 1819, near Huntington, Long Island, New York. On July 4, 1855, the first edition of Leaves of Grass, the volume of poems that for the next four decades would become his lifes work, was placed on sale. Although some critics treated the volume as a joke and others were outraged by its unprecedented mixture of mysticism and earthiness, the book attracted the attention of some of the finest literary intelligences. His poetry slowly achieved a wide readership in America and in England, where he was praised by Swinburne and Tennyson. (D. H. Lawrence later referred to Whitman as the"greatest modern poet, and"the greatest of Americans. Whitman suffered a stroke in 1873 and was forced to retire to Camden, New Jersey, where he would spend the last twenty years of his life. There he continued to write poetry, and in 1881 the seventh edition of Leaves of Grass was published to generally favorable reviews. However, the book was soon banned in Boston on the grounds that it was obscene literature. In January 1892 the final edition of Leaves of Grass appeared on sale, and Whitman's life work was complete. He died two months later on the evening of March 26, 1892, and was buried four days afterward at Harleigh Cemetery in Camden.

4.6 out of 5 stars
4.6 out of 5
64 global ratings
How are ratings calculated?
To calculate the overall star rating and percentage breakdown by star, we don’t use a simple average. Instead, our system considers things like how recent a review is and if the reviewer bought the item on Amazon. It also analyzes reviews to verify trustworthiness.

Brandon R
5.0 out of 5 stars A Classic Poet, In One Book.
Reviewed in the United States on October 18, 2020
Verified Purchase
This book is a beautiful addition to our home library. Every admirer and lover of literature should at least give themselves the pleasure of reading Walt Whitman and experiencing the many different styles of his poems. We love his poetry style.
The book itself is well-formatted (see pics) and offers us a chance to expand and explore deep into many of Walt Whitman’s most famous works. I highly recommend this collection to all writers and readers.
Read more

5.0 out of 5 stars A Classic Poet, In One Book.
By Brandon R on October 18, 2020
This book is a beautiful addition to our home library. Every admirer and lover of literature should at least give themselves the pleasure of reading Walt Whitman and experiencing the many different styles of his poems. We love his poetry style.
The book itself is well-formatted (see pics) and offers us a chance to expand and explore deep into many of Walt Whitman’s most famous works. I highly recommend this collection to all writers and readers.

Pamela L. Doane
5.0 out of 5 stars Good
Reviewed in the United States on December 1, 2020
Verified Purchase
This is not my firs time reading Walt Whitman his style is refreshing and honest.
Read more
3 people found this helpful
Helpful
Report abuse
See all reviews