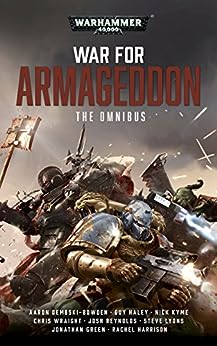 In the bleak 41st Millennium, the planet Armageddon is on the cusp of annihilation. The strategically vital hive world has captured the attention of infamous ork warlord Ghazghkull Thraka, and when the Astra Militarum and whole Titan Legions prove unable to halt the invasion, it is feared that both the planet and the wider sector will be lost to the greenskins. But the Imperium refuses to succumb and unleashes the Space Marines - genetically engineered warriors who thirst for naught but blood and victory. But can even this alliance of mankind's greatest warriors hope to turn the tide against Ghazghkull and his endless ork horde? This high-octane omnibus contains the classic novel Helsreach by New York Times bestselling author Aaron Dembski-Bowden, alongside four novellas and a host of short stories by some of Black Library best-known authors, including Guy Haley, Nick Kyme, Chris Wraight and Josh Reynolds.

It's a collection of brutal stories of war, heroism and honour, starring Space Marines and other Imperial soldiers battling the greenskinned invaders for the fate of Armageddon.

Robbie MacNiven is a Highlands-born History graduate from the University of Edinburgh. He has written the Warhammer Age of Sigmar novel Scourge of Fate and Gotrek Gurnisson novella The Bone Desert, as well as the Warhammer 40,000 novels Blood of Iax, The Last Hunt, Carcharodons: Red Tithe, Carcharodons: Outer Dark and Legacy of Russ. His short stories include ‘Redblade’, ‘A Song for the Lost’ and ‘Blood and Iron’. His hobbies include re-enacting, football and obsessing over Warhammer 40,000.

Nick Horth is the author of the novels City of Secrets and Callis and Toll: The Silver Shard, the novella Heart of Winter, as well as several short stories for Age of Sigmar. Nick works as a background writer for Games Workshop, crafting the worlds of Warhammer Age of Sigmar and Warhammer 40,000. He lives in Nottingham, UK.
Evan Dicken's first story for Black Library was ‘The Path to Glory’, and he has since penned several more tales set in the Age of Sigmar, including the novella The Red Hours, and short fiction for the anthologies Gods & Mortals and Myths & Revenants. He has been an avid reader of Black Library novels since he found dog-eared copies of Trollslayer, Xenos and First and Only nestled in the “Used Fantasy/Sci-fi” rack of his local gaming store. He still considers himself an avid hobbyist, although the unpainted Chaos Warband languishing in his basement would beg to differ. By day, he studies old Japanese maps and crunches data at The Ohio State University.

Darius Hinks’ first novel, Warrior Priest, won the David Gemmell Morningstar Award for best newcomer. Since then he has carved a bloody swathe through the Warhammer world with Island of Blood, Sigvald, Razumov’s Tomb and the Orion trilogy. He recently made his first foray into the Age of Sigmar with the novella Warqueen, and his Gotrek Gurnisson novel Ghoulslayer is due for release in the Autumn. He is also the author of the Warhammer 40,000 novels Blackstone Fortress, Mephiston: Blood of Sanguinius, Mephiston: Revenant Crusade and the Space Marine Battles novella Sanctus. --This text refers to an out of print or unavailable edition of this title.

Amazon Customer
5.0 out of 5 stars Watched Helsreach on Youtube, Had to get the book that started it
Reviewed in the United States on June 19, 2019
Verified Purchase
Got this for myself after watching the Helsreach series on Youtube. Great collection of stories and books that give a awesome understanding of the Black Templars from Warhammer 40k. The stories paint a rich back history of the Black Templars and their Eternal Crusade. The first book is the basis for the Helsreach series and a great companion for visual appeal.
Read more
10 people found this helpful
Helpful
Report abuse

J. Cooper
5.0 out of 5 stars Great intro to Warhammer 40K
Reviewed in the United States on March 12, 2019
Verified Purchase
This is my first book covering Warhammer 40K. I picked this up due to the fan made Hellsreach movie on Youtube. I really was drawn into the Black Templars and specifically Merek Grimaldus.
Read more
9 people found this helpful
Helpful
Report abuse

Sarah F.
5.0 out of 5 stars Amazing read!
Reviewed in the United States on October 11, 2019
Verified Purchase
For those picky Warhammer 40k fans who have a hard time picking books of quality after reading gems like the Horus Heresy, Eisenhorn and Ravenor omnibuses, Gaunt's Ghosts, etc. Right up there in superior quality of writing. Fantastic collection of books and short stories by some of the Black Library's best authors.
Read more
4 people found this helpful
Helpful
Report abuse

GR
4.0 out of 5 stars Good collection of Armageddon stories.
Reviewed in the United States on December 19, 2018
Verified Purchase
A good collection of stories from the 3rd war for Armageddon. Some stories of course are repeats from other book collections as it always seems to be the case with these Black Library book collections. But overall, enjoyed the various stories, especially Helsreach, which I actually avoided before.
Read more
6 people found this helpful
Helpful
Report abuse

KMMR
3.0 out of 5 stars Been dying to read this engagement... this book barely scratched the surface...
Reviewed in the United States on December 17, 2019
Verified Purchase
I was so disappointed when I got to the end of this HUGE omnibus to find that the whole thing really basically focuses on the Black Templars and they never - NEVER - get to the main boss of multiple wars for Armageddon. I have been dying to read more about Thraka and these campaigns and this was not it. That being said, it wasnt a bad compilation and I did enjoy the stories but it was a TON of buildup with no payout.
Read more
Helpful
Report abuse

Roberto
5.0 out of 5 stars In the grim darkness of the future...
Reviewed in the United States on May 26, 2019
Verified Purchase
This is intense. Quality 40k writing, and a must read for Black Templar fans.
Read more
2 people found this helpful
Helpful
Report abuse

a customer
4.0 out of 5 stars Great Book
Reviewed in the United Kingdom on March 29, 2020
Verified Purchase
Absolutely top of the line 40K action really good especially if you are a space marines (particularly black templars) or orks fan. Really good varied story lines of war on a grand scale, overall a great collection the only thing that stopped me from giving 5 stars is the massive over use of the word PORCINE in relation to the orks.
Read more
One person found this helpful
Report abuse

DiggyDoggDingle
5.0 out of 5 stars Death to the Xenos
Reviewed in the United Kingdom on October 4, 2019
Verified Purchase
Hellsreach is a black templars fan's dream. Titans, orks and templars what more could you want. The short stories give you different perceptions on the green skin invasion. All in all even just for the Hellreach story it's worth the money.
Read more
One person found this helpful
Report abuse

David Hanson
5.0 out of 5 stars One of the best 40k yet...
Reviewed in the United Kingdom on April 1, 2019
Verified Purchase
Top draw book from Black Library. My favourite is still Night Lords Collection but this sits well up there. If you like 40k, this book is for you.
Read more
Report abuse