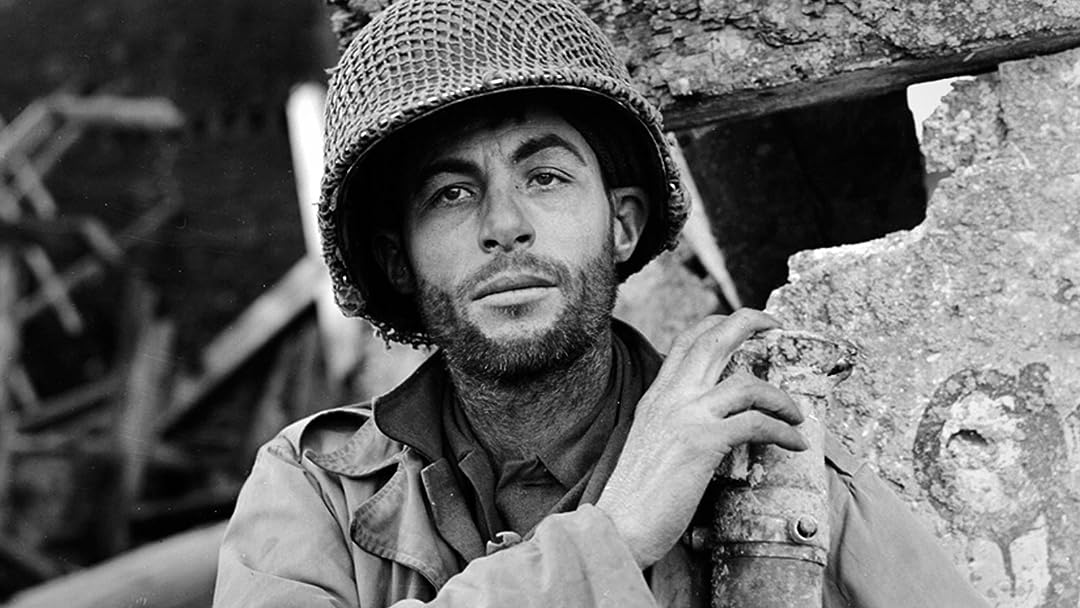 The War: A Film by Ken Burns and Lynn Novick

Season 1
(3,009)
9.02007TV-14
THE WAR tells the story of WWII through the accounts of people from 4 American towns. It explores the intimate human dimensions of the greatest cataclysm in history and demonstrates that in extraordinary times, there are no ordinary lives.

Randle ConradReviewed in the United States on October 4, 2017
5.0 out of 5 stars
The People, not The War...
Verified purchase
This series may be named "The War" but I found more about people and their emotions than fighting and war. Those who bravely took part in the 'atrocity' called war represented the best of the best. As shown by Ken Burns brilliantly, they often quaked in their boots as they trod over and alongside their brothers-in-arms, were sickened with the sights, sounds and smells of war. These are brave heroes who did what had to be done to conserve our freedom at any cost. The lives lost, the tears shed, the hearts broken were done so to conserve life in America, the life we all take so for granted today.

Born in 1961, I feel privileged to have been able to view the many sides of this war. So many of us had relatives who fought in this war. I am unable to adequately demonstrate my appreciation for every single one of our country's noble unsung heroes.

rocky mountain jazz fanReviewed in the United States on April 29, 2016
5.0 out of 5 stars
A very real history of World War II, masterfully presented.
Verified purchase
Simply put, this series should be required viewing for anyone who is too young to remember World War II or who wasn't born until after World War II. Likely no other single set of events so completely changed the world and set it--for better and worse--on the course it is on today. Sadly, few people beyond the Greatest Generation really know and understand what World War II was about. Worse yet, that ignorance has us poised to repeat a lot of the same mistakes that led to that catastrophic war.

The War captures nearly every nuance that occurred in those tumultuous years, and does that especially well with the personal recollections from ordinary people caught up in the war. Unlike so many World War II histories, this one is not some glorifying, propagandizing, sanitized recount of events. It shows, often in gruesome and bloody detail that can be outright uncomfortable, the mistakes, miscalculations, brutalities, and horror that occurs in the "fog of war." The War also shows how ordinary citizens mustered the bravery, fortitude, and common sacrifice necessary to surmount and survive the many difficult circumstances of World War II.

My parents were of the Greatest Generation--my father served in the Navy in both the Mediterranean and the Pacific theaters and my mother worked in defense industries and the Office of Emergency Management stateside during the war. I learned a lot about the war from them and yet more from this mini-series. The one thing that they told me that The War touched upon but did not emphasize enough, in my opinion - the feeling that pervaded almost every American almost until the end of World War II that "If we don't do everything that we can in every way, we could lose this war," as my Mom put it. That is a lesson that modern day Americans should take to heart from this well-presented history. We soon may be there again in world events. Will we have the courage and determination of the Americans during World War II? I hope so, but I have my doubts.

Carolina DadReviewed in the United States on December 11, 2016
5.0 out of 5 stars
A powerfully moving account of the war told in vivid, first person detail. Highly, highly recommended
Verified purchase
Alternatively moving, horrifying, funny, and tragic, this powerful account of the war brings the experience of WW2 into sharp focus through the vivid recollections and words of people from four small American towns. The spare, unpretentious authenticity of the stories told here in direct and unadorned language can be almost unbearably heartrending at times, but the film's greatest gift is its own transparency - you almost forget you are watching a film, so engrossing and etched in granular detail are the vignettes. Mr. Burns and his team unfailingly treat the subject matter and the speakers themselves with dignity and respect, even when drawing forth painful or brutal memories from those dark, dark times. An incredible experience, and highly recommended.

Just as an advisory note, especially for parents: there is no sugarcoating here, so be advised that certain passages recounting episodes of particular brutality can be very hard to watch.

Rent-a-DadReviewed in the United States on February 2, 2016
5.0 out of 5 stars
Comprehensive in Scope
Verified purchase
If you're looking for a comprehensive look at World War II, then Ken Burns' "The War" is for you. If you consider yourself a World War II "fanatic" and you especially like the behind-the-scenes political intrigue of Hitler or you enjoy learning about how one weapon was better than another weapon, then move on to something geared toward that subject. "The War" not only proved a very good overview of the progression of the war, including military strategies, but it looks at the war from a personal perspective. Burns helps the viewer understand the war from the point of view of soldiers, brothers, sisters, moms, dads, and neighbors. It was the last war that truly affected everyone in the country in some way, and Burns does a fabulous job in showing how we were a "nation at war" and not just people who sent away our young adults to fight on our behalf. Also, by giving special attention to four specific communities in the US, Burns is able to give a sense of regionalism in the affects of the war as were not yet quite as connected as we are today. The US's involvement in the war was relatively brief, just short of four years, and although the length of this series would not seem to justify that brief of a war; World War II changed America in so many ways. It was a pivotal period and deserving of this kind of attention. In my opinion there isn't a minute of wasted film.
29 people found this helpful

SlushierCashewReviewed in the United States on August 14, 2015
5.0 out of 5 stars
You owe it to yourself and your ancestors to watch this.
Verified purchase
Hands down the best documentary regarding World War II that I have ever seen, or may ever see. Prior to watching The War, I thought I had a pretty good understanding of WWII; by the end, I came to realize I had no idea what it was like, and what my grandparents and great-grandparents went through. That is the power of this series - it steps away from the strict historical retelling of what happened where to give you an idea of what was going on here at home. I found myself simultaneously heartbroken, horrified, and uplifted, and definitely changed in some way by this series. Never happened to me before; the only regret I have is not watching this sooner in my life.

The only thing I found missing was more in-depth coverage of the holocaust aspect of the war, but that is more a part of the European history of that time, and is certainly covered in detail in dozens of other documentaries. I'm not sure I could have taken it anyway. A recommendation would be to avoid watching this series back-to-back, as it can be overwhelming. Also, think carefully about watching it with your children, as some of the imagery is very graphic (in a necessary way).
18 people found this helpful

onehotmommaReviewed in the United States on September 7, 2016
5.0 out of 5 stars
Lest we forget
Verified purchase
This series was on Netflix earlier this year and I though I don't usually watch much tv at all, I was literally glued to each of these episodes. Then summer came and I had a lot less free time with the kiddos home so I never got to finish the last 3 episodes. When I discovered it was no longer available on Netflix, I was so happy to find it here. This is so well done- educational and also entertaining. My kids will always come and sit down & watch it with me when it's on which makes me happy (ages 9, 10, 13 & 15). It's important for us all to never forget what happened.This generation of kids learns about WW2 in history class textbooks, but they have no idea what it was really like to be enlisted, be a girlfriend, sister, or parent of a soldier, or what doing battle was really like. This documentary inspired us to pick up a copy of Paul Fussell's book "Doing Battle" and E.B. Sledge's book "With the Old Breed" after watching this. Both great books that I highly recommend.
10 people found this helpful

Son of ThunderReviewed in the United States on June 22, 2020
5.0 out of 5 stars
A good overview of WW II, on multiple fronts.
Verified purchase
Like others, I thought I had a pretty good understanding of the War, based on books I’d read and multiple historically based movies and mini-series I‘d seen. There were gaps in my understanding of the timelines nicely filled in here, and multiple personal perspectives from which the story of the War were told. Profound educational, and must-see viewing for all Americans of voting age, in my opinion. I was born 10 years after the War ended, and this series helps set the stage for (and give context to) much of has happened during my lifetime. Like others, I wish I’d seen this sooner, and wish I’d had this knowledge of the war back when there were people in my life I could have talked to about it.
3 people found this helpful

DarrellReviewed in the United States on February 4, 2017
5.0 out of 5 stars
Another great Ken Burns documentary
Verified purchase
I haven't finished, but this is another great documentary. It is a bit more "raw" than many WWII documentaries, so I would not recommend it for young children (although I doubt that there would be all that many who would be interested in this). The idea is to explore the war from the viewpoint of the people from 4 different towns across America. It is not just about the towns (which is what I feared it would be), it is an integration of the soldiers and sailors who came from those towns intermingled with how those towns reacted. It can get very emotional in the telling -- especially when someone describes what it was like at home to get the dreaded telegram. Overall the focus is heavier on what was going on overseas -- ,more at the foxhole level rather than the "great" campaigns. Very well put together.
9 people found this helpful
See all reviews
Back to top
Get to Know Us
Make Money with Us
Amazon Payment Products
Let Us Help You
EnglishChoose a language for shopping. United StatesChoose a country/region for shopping.
© 1996-2022, Amazon.com, Inc. or its affiliates