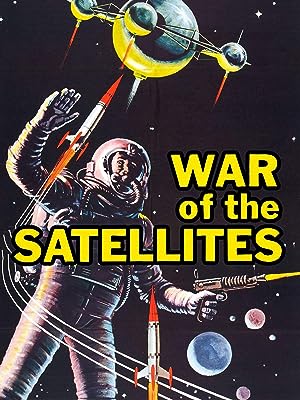 War of The Satellites

(48)5.11 h 5 min19587+
An unknown force declares war against planet Earth when the United Nations disobeys warnings to cease and desist in its attempts at assembling the first satellite in the atmosphere.

erdprodReviewed in the United States on June 4, 2020
5.0 out of 5 stars
Enjoyable Roger Corman B movie.
Verified purchase
The story for this came from Irving Block, who also sold the story to M-G-M for Forbidden Planet. Block and Jack Rabin worked together on may TV shows and movies doing special effects, visuals, matte paintings, etc. Besides this movie Block and Rabin worked on Invaders From Mars (the original one), Kronos, Atomic Submarine, Rockeship X-M, and the TV show Men Into Space.

William Lundigan really should have played the good-guy lead in this as he would have been stronger against the tall, awesome actor Richard Devon, who is a great presence in this movie as initially the good science who is killed by the space people and replicated, so he is now the bad guy and he turns in a really good performance.

The only thing I never fully understood with the mirror thing as the facial marks on Devon's face were hardly mirrored!

I originally saw this in the theater when I was 8 years old and thought it was terrific.

I still think it works well and holds it's own with movies like IT! Terror From Beyond Space, and GOG. Two other movies I love watching.

Don't expect it, however, to be of the caliber of THEM which is a B+ or A- sci fi movie. But it is watchable and enjoyable.

James C SmithReviewed in the United States on February 5, 2020
4.0 out of 5 stars
Obscure But Excellent Corman Classic
Verified purchase
This is one of Corman's more enjoyable low-budget B&W sci-fi films from the '50s.

Richard Devon, the main star of the movie, is again excellent as he was in Corman's "Viking Women and the Sea Serpent". For his contribution alone, I'd recommend this old classic. And fans of Corman's older classics will immediately recognize Susan Cabot ("The Wasp Woman"), who has a lesser supporting role here, but is pleasant nonetheless.

Beyond Devon's excellent performance, the story itself is well-crafted and does not bog down with wandering plot lines, filler scenes, or dull dialog.

As for the transfer to digital, it appears to be completely raw, taken from a print in marginal condition. The visual is generally quite crisp, yet suffers from significant film damage, but only to the point where it is noticeable without being bothersome. The audio often has sharp, crackling background noise, which I found to be a bit irritating at times, but not overwhelming.

I'd really like to see this get transfered to 4K, then restored and released on Blu-ray in true HD. This brief film deserves such preservation.

Robert V. WainscottReviewed in the United States on March 18, 2020
5.0 out of 5 stars
Bad movie night!
Verified purchase
Greetings,
If you are a fan of Grindhouse, Midget Westerns and Low Budget Sci-fi then this is for you. I've seen children's dioramas at the County Fair that would put most of these sets to shame. The actors actually do a good job of telling a ridiculous story but sadly no one had any idea as to how space travel might work and it shows. Both my gal and I believe the spacesuits were later adopted by DEVO.
3 people found this helpful

Dennis MummertReviewed in the United States on September 18, 2020
2.0 out of 5 stars
The writing stopped 20 minutes before the end.
Verified purchase
Corman has had near hits. I can't think of any, and this could have been one of them. It's not. Somebody got drunk halfway into writing the concept for the script and forgot to write...the script. Granted, it has some shining moments, and some original ideas. The sets, when they aren't convoluted hallways in Art Deco space ships aren't half bad. Nor are they half good. Leave it alone. Maybe they had fun making it. Maybe they made money on it. I certainly won't get the hour and a half I wasted on it back, viewing it and writing this review. But I did enjoy it just a little bit. I like to poke holes in philosophy lessons, and that's what a lot of the crappy 50s sci-fi movies were. What this one was, until it degenerated into panic-written nonsense.
One person found this helpful

That ACPress GuyReviewed in the United States on December 16, 2020
4.0 out of 5 stars
Matinee movie quality, but a hoot.
Verified purchase
I saw this as a kid and never forgot the scene where the fake human has a hand burned to a crisp and repairs it on camera without dissolves, fades or whatever. Also when the same creature splits into two creatures it was a well-done bit of filming. If watching online be SURE to read the X-Ray trivia regarding some clearly audible flatulence in one scene.
One person found this helpful

Looking CloserReviewed in the United States on September 9, 2020
4.0 out of 5 stars
Charming and fun
Verified purchase
Despite a very simple plot, this Grade B Science Fiction Movie, as they were once called, is fun to watch. The film is nostalgic for me, and if you keep in mind the period of time it was made, Corman's work is a charming take on the "race to space," and its mystery. Of course, this is a Grade B. The first human went into space in 1961, three years after this film was released.

A reviewerReviewed in the United States on June 23, 2021
1.0 out of 5 stars
A sci-fi classic best left in the past
Verified purchase
Why only one star? In no particular order...
Amateurish special effects bordering on laughable. Shocking lack of regard for human life, followed by outright hypocrisy - "I'll die before I join a race that kills innocent people for abstract ideas." Human arrogance, e.g., if we have the ability to travel there, it is ours for the taking.

Hagen LeBrayReviewed in the United States on October 3, 2020
4.0 out of 5 stars
Not Bad for the Day
Verified purchase
I rated this film on the plot and the acting, both of which were above average. Lots of familiar faces in the cast. Technologically, the film was lacking authenticity, but in 1958, who knew better? Worth a watch, sci-fi fans.
See all reviews
Back to top
Get to Know Us
Make Money with Us
Amazon Payment Products
Let Us Help You
EnglishChoose a language for shopping. United StatesChoose a country/region for shopping.
© 1996-2021, Amazon.com, Inc. or its affiliates