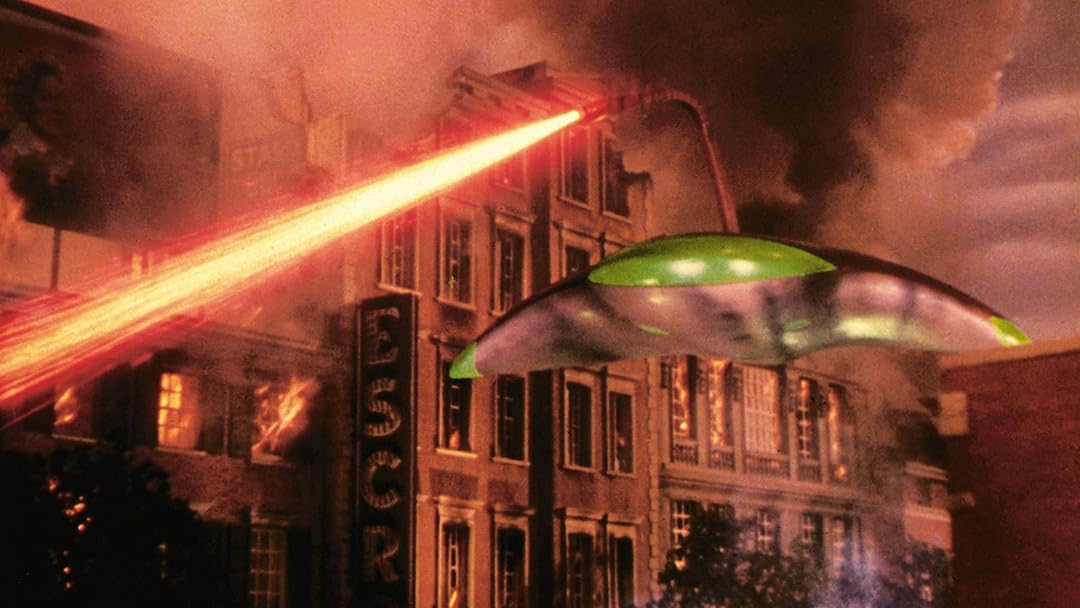 (4,247)
7.01 h 25 min1953X-RayHDRUHDNR
Gene Barry and Ann Robinson are among the humans intrigued when a meteor-like object crashes to Earth … but its occupants are definitely not friendly.

WayneReviewed in the United States on February 26, 2017
5.0 out of 5 stars
Science Fiction Classic
Verified purchase
Considering the limited technology of the 1950's, this movie has stunning visual effects. The alien warships are beautiful to look at. The cobra like heat ray that extends from the ship is ominous.

The dialogue is typical corny 1950's jargon, and the science is questionable. Plus there is an annoying overuse of three, 3 ships in a pod, 3 pods in a unit, 3 eye lenses, 3 toes, 3 fingers, and even 3 blood cells clumped together. I also have to wonder why the scientists were not given a heavily armed escort back to the Science Institute if they were the last hope to rescue humanity.

My wife and I still laugh about and use one of the BEST life lessons to have EVER come come from a movie. It comes from the Mexican man who advises the other two men, "Don't mess around with something when you don't know what it is!" Unfortunately he caved to peer pressure and stepped in front the Martian warship only to be blasted into a pile of ash along with his companions.

These shortcomings aside, the movie is still billions (that's right, BILLIONS) of times better than the 2005 remake with Tom Cruise. There are three science fiction movies that I rate as classics that all science fiction fans should watch and own, The War of the Worlds (1953), The Day the Earth Stood Still (1951), and The Time Machine (1960).

John M. CurlovichReviewed in the United States on June 15, 2020
5.0 out of 5 stars
Dazzling
Verified purchase
Absolutely gorgeous 4K restoration. The original stereo soundtrack has been restored for the first time--brilliant--the Martian war machines have never seemed more alive or menacing! The splendid original three-strip technicolor has been correctly processed for this disc (again for the first time), with the result that the wires supporting the Martian war machines, which were painfully apparent in previous video releases, are invisible except in one or two instances where they appear very faintly. There are three commentary tracks, and among them you'll learn pretty much everything you could want to know about the film. I can't recommend this disk any more highly. If you love this movie (as I obviously do), or if you've never seen it before, you're in for a magnificent treat with this.
13 people found this helpful

Michael I. LefkowitzReviewed in the United States on November 28, 2016
4.0 out of 5 stars
Geoge Pal's Film Version of the Clasic Novel by H. G. Wells
Verified purchase
This is a solid, enjoyable version of the H. G. Wells npvel about a martian invasion of the earth. The film was produced by George Pal,. a pioneering animator of films, later eclipsed first by Ray Harryhausen and then by computer generated special effects. The effects here are somewhat dated, but still effective enough, especially the diminutive martian invaders who are seen out of their warships for only a few brief moments of the film. The characters are very likeable especially the the young couple who meet after the first martian craft lands near a small town and is mistakenly believed to be a meteor. Gene Barry and Ann Robinson are terrific together as the couple, he a scientist and she a resident of the town where the martian invasion begins. The performances are all low key and director Byron Haskin expertly captures the feel of small town America in 1953. There is a a narration delivered very well by Sir Cedric Hardwicke which lends a tone of scientific gravity to the film. The script is weighed down by its insistence on making the film almost a religious lecture, but, overall, this is a memorable film. far better than the Tom Cruise remake Fortunately, the film did not create a panic as did Orson Welles radio version in 1938.
27 people found this helpful

MuzeMouseReviewed in the United States on December 4, 2019
3.0 out of 5 stars
Case is Korean, movie in English
Verified purchase
If you like Korean re-productions this is for you. Yes, the movie is in English...with Korean subtitles. The movie review on the reverse of the CD case is in Korean. Very disappointed. I bought it to go with my classic sci-fi collection but will have to re-do the case myself in English. Only gets 3 stars instead of 1 because movie itself is good.
11 people found this helpful

DEPLORABLE MIKEReviewed in the United States on March 20, 2020
5.0 out of 5 stars
"Classic" Sci-Fi.
Verified purchase
This movie is remarkable in so many ways. It led the way in special effects in Hollywood in both visual and audio some 60 years ago. I recall a story my mother used to tell me about when this story was first aired on radio only that many people beleived it to be a real invasion and were literally jumping out of windows in high rise buildings commiting suicide. Apparently they announced a disclamier at the beginning of the radio show and those who missed it beleived it to be really happening. I can envision that hysteria considering the threat of nuclear war in the fifties. I rate this at the top of the genre with "Time Machine" and "The Day The Earth Stood Still" both movies I highly reccomend.
6 people found this helpful

matt hangasReviewed in the United States on July 9, 2017
5.0 out of 5 stars
Truly an iconic sci-fi classi...
Verified purchase
Truly an iconic sci-fi classic...all of this was done with models, miniatures,film overlays, lighting, and sound editing...truly a masterpiece, and quite an ambitious undertaking, given that, just sixteen years ealier Orson Welles and his Mercury Theatre scared the bejesus out of America with their Haloween night broadcast of "War of the Worlds"...of course intellectuals will pontificate about Cold War paranoia and invading hordes, but honestly, this movie survives and stands as a true classic because it is just a good movie, it is scary (in a nostalgic way) and just good fun...plus the good guys win in the end...
16 people found this helpful

Frank L. ShannonReviewed in the United States on April 29, 2022
5.0 out of 5 stars
What about Venus?
Verified purchase
Something that always bothered me is that Sir Cedric Hardwicke, for some reason, totally skips Venus in his opening narration. Is Venus chopped liver or something? Why didn't the Martians consider Venus? Pretty rough place but definitely their best choice, as it turned out. Probably no bugs in that sulfuric acid air it's got. It would definitely be warm enough and the gravity would be a little better than Earth.

Absolutely loved this movie as a child. Deliciously terrifying for a 9 year old in the late 60's. Triggered equally marvelous nightmares. And I still love it and for all it's silliness it's just beautifully done and still entertaining.

I think NBC had TV rights and would run it now and then on Saturday Night At The Movies. For some reason I associated its showing with "Lonely Are The Brave", The Kirk Douglas movie that was his personal favorite. If they played "Lonely.." it meant that they would play "War.." sometime in the next couple of weeks. That was my belief anyway. And I would have been devastated had I missed a showing back then. The funny things in a kid's life.
See all reviews
Back to top
Get to Know Us
Make Money with Us
Amazon Payment Products
Let Us Help You
EnglishChoose a language for shopping. United StatesChoose a country/region for shopping.
© 1996-2022, Amazon.com, Inc. or its affiliates