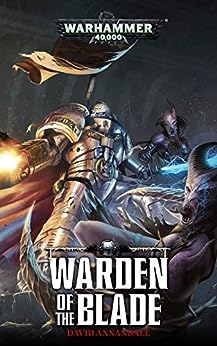 by David Annandale (Author) Format: Kindle Edition
See all formats and editions
Sorry, there was a problem loading this page. Try again.

Book 1 of the Castellan Crowe series

Castellan Crowe of the Grey Knights bears a heavy burden – to carry the cursed Blade of Antwyr, a weapon imbued with dark power. For the first time, discover the origins of this dread task and why only Crowe can be the one to carry it out.

t's a fascinating look at a compelling character, showcasing the duality of the purest of souls as he contends with the corrupting power of an artefact that could damn him and all he holds dear to utter ruination.

Castellan Crowe, Brotherhood Champion of the Purifier order of the Grey Knights, bears a heavy burden – to be the warden of the dread Blade of Antwyr. Its malevolent voice is forever in his head, trying to crack his resolve, urging him to unleash a power he must never use. The toll is terrible, and how long before the incorruptible Crowe is at last defeated? His harrowing task first began at Sandava II… Under the command of Castellan Gavallan, Crowe and his brother Purifiers bring purging flame to a daemonic incursion that threatens to consume the world. What awaits them is more insidious and more powerful than they imagine, and they must reckon too with the machinations of the Blade, as it seeks to destroy its guardian and drown the galaxy in blood.

4.2 out of 5 stars
4.2 out of 5
8 global ratings
How are ratings calculated?
To calculate the overall star rating and percentage breakdown by star, we don’t use a simple average. Instead, our system considers things like how recent a review is and if the reviewer bought the item on Amazon. It also analyzes reviews to verify trustworthiness.

There are 0 customer reviews and 8 customer ratings.