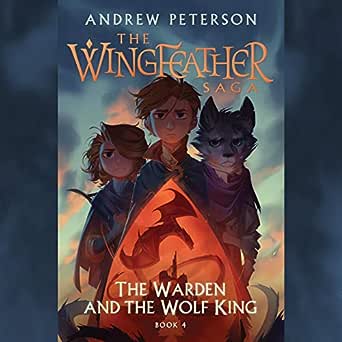 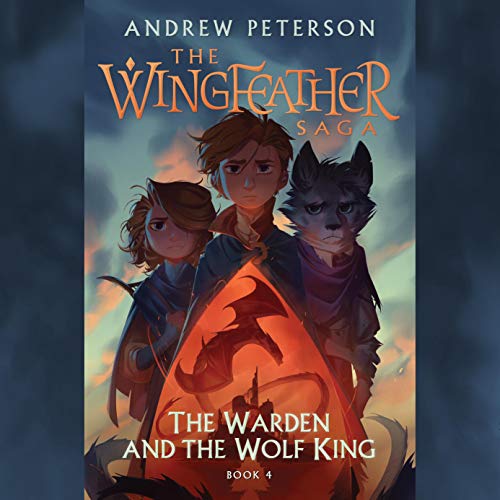 The Warden and the Wolf King: The Wingfeather Saga, Book 4

Holiday Deal
Get Audible Plus for $4.95 a month for your first 6 months. Get this deal
Share

4.9 out of 5 stars
4.9 out of 5
489 global ratings
How are ratings calculated?
To calculate the overall star rating and percentage breakdown by star, we don’t use a simple average. Instead, our system considers things like how recent a review is and if the reviewer bought the item on Amazon. It also analyzes reviews to verify trustworthiness.

RaceMom
3.0 out of 5 stars Disappointing overkill.
Reviewed in the United States on May 23, 2017
Verified Purchase
I liked the first book. I loved the second and third books. And I had problems with this fourth book. I felt that it was overkill. Literally. I'm pretty sure that the goal of these books was to encourage and give hope and point the reader to God, and the first three books succeeded in doing so, but by the end of this very bloody book I felt discouraged, and the feeling was made stronger by the build up of hope from the three previous books. Why was it so disappointing and discouraging? A story with as much hardship, heaviness and darkness as this one (and this series in general) has needs a really good and strong catharsis at the end, and this was simply absent. Maybe the author is planning a book number 5, but that's not what it felt like. It felt raw. The death and hardship continued up to the very end, the tension was not relieved, the characters, who were given so much development during the novels, suddenly were left without dealing with what had happened, and this reader was left in the lurch. I did appreciate the how at the end a destroyed people where made new again, however.

(Spoiler alert) Okay, and a personal note as to why I particularly was discouraged by this book: As a mother of three children I identified with Nia Wingfeather as much as with any other character, and wow, to put it simply and bluntly: "Stinks to be her." She loses her home, her mom, her husband, her husband (again), her father, her other love interest and then, at the very end (during the wrap-up), she loses one of her children. Really? I finished the book literally feeling like I'd been punched in the stomach, especially because we are not privy to her internal dialogue or how she processes these losses. Well I guess it's a book aimed at 13 year old boys and maybe men too, because my husband didn't have a problem with it, but I sure did.

Sara
5.0 out of 5 stars Beautiful book AND beautiful ending
Reviewed in the United States on January 23, 2018
Verified Purchase
I could not disagree more with the reviewer who said the ending ruined it all for him/her and they couldn’t recommend it. I’m completely flummoxed by that comment, as it couldn’t have been a more beautiful and yes, painful, ending. Without giving anything away, this isn’t the kind of story that tidies everything up in a pretty bow, which is of course just like life on this earth. But this story is one in which we see the battle between good and evil, not only out there, but within our own hearts, and the glory of mercy and redemption.
Mr. Peterson, thank you for writing these books and giving my sons (6 and 7) and I an adventure we could get lost in together; for giving us language we could speak via this story that explains OUR stories and experiences when we lack our own words.
Beautifully and brilliantly written.

Kindle Customer
5.0 out of 5 stars Absolutely Amazing!
Reviewed in the United States on October 10, 2017
Verified Purchase
You really didn't leave it there?!? Lol. Wow.... I am a grandmother of two and one-on-the-way by God's amazing grace. And also a pioneer home schooler. I happened upon these books by providence and am so thrilled I did. The intent was to pre-read for family reading to my grandchildren. I fell in love on the way with all the amazing characters. I kept telling myself "you're too mature to enjoy these this much" lol. But I did. I cannot wait to share them with my precious children. Thank you, Andrew Peterson, for having such an incredible gift of writing that created such beautiful imagery capable of making me run the gamut of giggles to tears; of joy to sorrow; of peace and lastly, hope! Kudos!
Read more
14 people found this helpful
Helpful
Comment Report abuse

The Professor
5.0 out of 5 stars This is the Right Kind of Fantasy...and Fiction, For That Matter.
Reviewed in the United States on April 14, 2019
Verified Purchase
This is one of those books you want to read very quickly to find out the ending...but you want to read desperately slowly because you don't want the series to end. There were a few plot choices here that I would have routed differently, but that's purely subjective - they do not compromise characterization or overall meta-narrative.

Some have been critical of the amount of darkness and death in this final book. I read it out-loud with a sensitive ten-year-old daughter who has been brought up on the fare of Lewis and Tolkien, the Bible and biographies, and a wide spread in-between. She has a very sensitive radar when it comes to the wrong kind of violence, victimization, manipulation, etc., and she loved this story in its entirety. We must introduce our children to "real" dragons in Fiction so they can recognize those dragons CAN and ARE defeated to empower them to know that the real dragon in *this* world IS and WILL BE defeated. Those who die in this novel die well (or badly and rightly, if you know what I mean), and there is worth in those deaths. They are not cheap, and they do simply function as plot devices. They reflect self-sacrifice that goes into the ground to bring forth life...seeds that bring forth fruit are not needless. Anyone who thinks this book is overkill should spend some time in early church Histories, starting with Eusebius.

The characterizations stayed consistent and vibrant and robust to the end, and I appreciate Peterson added weakness and struggle to some of his more steady characters like Leeli. Any parent with multiple children should read this series to them tomorrow - I can't think of a better set of books to illustrate valiant and loving sibling love.

Per the ending, I will not give it away, but kudos to Andrew Peterson for writing a novel that has a somewhat unresolved ending, but left me with complete peace. There is a bit of a "cliff hanger," but whether or not it goes one way or the other, I was completely content with the closure of this story.

I have read and studied and taught on Lewis and Tolkien for almost twenty years, and I can unreservedly say that the Wingfeather Saga is, though clearly a different style and from a different epoch, able to stand in their company.

Brian McBride
5.0 out of 5 stars So profoundly spiritual... left me breathless
Reviewed in the United States on February 16, 2019
Verified Purchase
I... honestly have no words. This series has shaped me in indescribable ways. This book was a finale of epic and profoundly supernatural proportions. I’ve never wept so much over a story. Nor have I laughed so much. My spirit soared with every victory and I was breathless with every battle and opposition that reared its face. This is, quite literally, the most spiritually profound fantasy saga I have ever read and has earned its place in rank with The Chronicles if Narnia and The Lord of The Rings. I can’t wait to see what Andrew Peterson has for us next.
Read more
6 people found this helpful
Helpful
Comment Report abuse
See all reviews

Dhahabu
5.0 out of 5 stars Amazing conclusion to a great series
Reviewed in the United Kingdom on July 28, 2019
Verified Purchase
If you want to read a series of books with your children (or just for yourself!) that is gripping, fascinating, uplifting, heartbreaking, teaches you positive life lessons and gives you an allegory of the Christian gospel, you have to read this series!
Read more
Report abuse

Wardorf
5.0 out of 5 stars Just Brilliant
Reviewed in the United Kingdom on October 5, 2014
Verified Purchase
I read the last few chapters of the book with mixed emotions including the excited expectation of the conclusion and sadness knowing the joy of reading the whole saga was coming to an end. But I will read these books again and again because they have blessed my soul
Read more
3 people found this helpful
Report abuse

rosemary beattie
5.0 out of 5 stars Gripping story
Reviewed in the United Kingdom on March 8, 2015
Verified Purchase
Super story. My son who is a good reader has the whole series now. He loved them and his cousin is currently enjoying them.
Read more
Report abuse

bethj
5.0 out of 5 stars a rare gem of children's fantasy
Reviewed in Canada on October 23, 2015
Verified Purchase
A fitting finale to Peterson's brilliant series. The first book throws up a few hurdles by way of so much new information to process in a world of completely different animals and plants, but any persevering reader is quickly and greatly rewarded as he/she is drawn into one of the best children's fantasy series yet published this century. Sharing the sensibilities of CS Lewis and Tolkien, yet entirely its own tale and world, Peterson's Wingfeather Saga ends all too soon. Not just the primary characters, but so many of the secondary ones too, continue to haunt one's imagination long after the last page is turned.
Read more
Report abuse
See all reviews