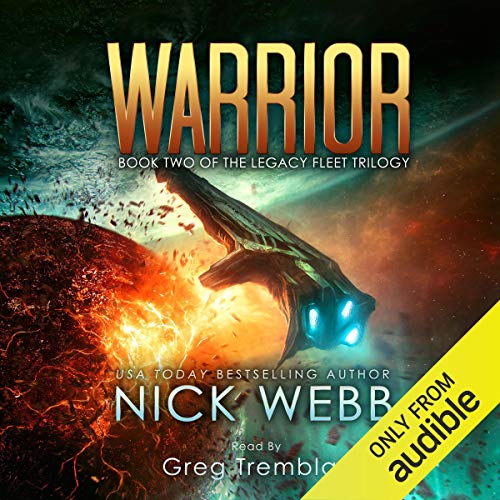 List Price: $17.00
You Save: $2.12 (12%)
By completing your purchase, you agree to Audible’s Conditions Of Use
Sold and delivered by Audible, an Amazon company
Share

4.4 out of 5 stars
4.4 out of 5
1,280 global ratings
How are ratings calculated?
To calculate the overall star rating and percentage breakdown by star, we don’t use a simple average. Instead, our system considers things like how recent a review is and if the reviewer bought the item on Amazon. It also analyzes reviews to verify trustworthiness.
Top reviews

K. Quaintance
2.0 out of 5 stars Keep It Real Nick
Reviewed in the United States on March 23, 2016
Verified Purchase
I don’t believe Nick Webb put a lot of thought into this one. It was more of an easy laid back read with none of the perks that The Constitution book reveled . Beside another Alien encounter there’s nothing new or interesting added here to the sequel that really made this read worthwhile. In fact , there wasn’t anything clever written or Anything that actually made a whole lot of sense had this been our reality set sometime in the future. . Take the Captain Granger for instance. He should have been promoted to Real Admiral at the end of Book One. If not then , then he should have been promoted at the beginning of the Warrior Book - OR - when he leads over 150 space cruisers into enemy territory. No mere Captain would be in command of such a sizable fleet. And at the end of Book Two in The Legacy Fleet Trilogy , Granger should have been promoted again to Vice Admiral. But I guess not ..the author needs a hero , and that has to be a Captain. Speaking of which , Captain Granger was coming off like a comic book hero in the first few chapters while patting himself on the back. He wasn’t being very professional like a man wearing the Navy Uniform. And then there is the only other Admiral in this book who was taking advice from a Captain. That would be our hero - Captain Granger of course. We don’t know what kind of Admiral - Zingano was because it was not specified. His character was a blank , but he could have been a Fleet Admiral had Nick taken the time to make it more realistic. As it turns out we will never know.. He was more like an empty character who always supported the hero of the day , Captain Granger. Let me say that again -- Captain Grangerrrrr -- To The Rescue! It has a nice ring to it right?! But if he is Still a mere Captain by the time Book 3 comes out, than you can count me out.

Beyond all the hero nonsense , this book was filled with several holes that wouldn’t have actually happen in reality. Like: Once Proctor found a way to detect the alien gene , this process should have been conducted throughout the fleet before operation Battleaxe. And then Captain Granger calls the shots sending two thirds of Earths fleet into enemy territory on a whim without being properly prepared. Then when he gets there he keeps thinking he might have forgotten something.. And again all we see are Navy Cruisers , Some being heavy, some light and no mention of Space Battle Cruisers, Space Carriers or Destroy escorts , or even a single Battle Ship in sight. We also don’t get a clear picture or know much about the Alien ships , other then they are Alien Carriers that hold lots of space fighters and shoot green beams. We also got a good look at President Avery who came off like a hard bitten tramp. I could have done without the story of her holding another man’s junk in her hands , before she grew up and turned into a twisted woman. All in all.. this is a laid back read for the adolescent reader who might find it humorous from time to time. My opinion is that It’s not well thought out , not very cleaver or being clear on certain situations that should have been revealed. I say it’s time to put down whatever you been smoking Nick , and add some sense into your next science fiction book , or perhaps you can keep it juvenile and hope for the best - when you know you can do better.
Read more
26 people found this helpful
Helpful
Report abuse

I waited until I had finished Book 6 in the Series to write any reviews, so you will see this at least four more times and I recommend all 6 books in the Series.
Read more
Helpful
Report abuse

JJCEO
#1 HALL OF FAMETOP 1000 REVIEWERVINE VOICE
5.0 out of 5 stars A good book with a lot of action and twists and turns in the storyline that I found entertaining!
Reviewed in the United States on August 4, 2016
Verified Purchase
This is the second book of the series and I liked it more than the first story. The action is continuous and I like many of the characters in the story. Captain Granger has become a force of nature in destroying the Swarm in combat. His strategies are successful and he seems to know exactly how to defeat them. Unfortunately he has no qualms in sacrificing people and space craft to act as cannon fodder while his remaining forces crush the Swarm. His nickname is “The Brick-layer” for all of the crews and ships that he has sacrificed in battle.

Despite his success there is a lot of suspicion regrading him. His disappearance after entering a miniature black hole and returning a new man health-wise makes his commanders, politicians and crews suspicious of whether he is still the real Captain Granger. Has he just been reincarnated or is he really part of the Swarm’s plan to conquer Earth and the human race as a whole……

The action and twist and turns in this book’s plot line kept me interested and reading at a furious pace. I enjoyed the book and I found it entertaining. I like military Sci-Fi and this book was right up my alley as far as space battles, suspense, and alien interactions. I enjoyed the book and I recommend it as worth reading. I rated it 5 stars.
Read more
4 people found this helpful
Helpful
Report abuse

Anders Haywood
4.0 out of 5 stars A great battlestar Galactica type series!
Reviewed in the United States on November 28, 2015
Verified Purchase
This was a great sequel to the first book (Constitution) and was a fairly quick but engaging read.
Following right on from the original, we pick up right where the first left off.* No spoilers *
This installment was, like the original, fast paced and engaging. There were plenty of space battles, full of excitement, strategy and derring do. The book balanced this very well with intrigue and political machinations that really kept me guessing.
This was one of the books' best points. Many (but certainly not all) of the series' mysteries are really left up in the air until the end.
Again, NO spoilers, but the reader is left in the dark to guess at answers until the very end. I found both the mysteries and their resolutions to be great, mostly unanticipated problems that really kept me guessing.
The other strong point ofvthe novel (and series), was the characterisations. The characters were deep and their motivations rung true to character.
I really did find myself empathizing with the characters, who really came across as all to real, with the same motivations, flaws and strengths that I'd expect to find in real people.
The only thing I'd mark down on this is that the chapters often end on a dramatic note and keep the reader guessing until they finally get back to that particular narrative.
It's a small thing, but a bit of a pet peeve of mine.
All in all, I loved this book and am glad that I'm signed up to get notifications as soon as the next one drops, as I reeaalllyy want to see how the next twist plays out in this saga!
Read more
One person found this helpful
Helpful
Report abuse

Lcashless 1.
5.0 out of 5 stars Stumbled over this gem of a series, glad I did.
Reviewed in the United States on July 25, 2021
Verified Purchase
Very well done, fast paced, plenty of action, very enjoyable.
For some reason I thought I had read the series Kendall said I had read the first book in the series but I do not remember it. But this one was excellent. Space battles political intrigue and machinations not knowing who your enemy is what more can I say. If you like all these factors in a book you will enjoy the Book. I’m glad I found it later on so I don’t have to wait for the next installment.
Read more
Helpful
Report abuse
See all reviews

A1PLT
4.0 out of 5 stars Great Way to Continue the Series
Reviewed in the United Kingdom on February 11, 2020
Verified Purchase
With twists and different things going on for different characters, be it space battles, political espionage or fighting your own thoughts, this book really leads the fight for Earth’s survival in to the next stage. I can’t wait to read the 3rd instalment of the Legacy Fleet and see what happens next for the Fleet.
Read more
One person found this helpful
Report abuse

OlaOnline
1.0 out of 5 stars Poopr combat, Poor story telling, Poor sci fi sequel
Reviewed in the United Kingdom on December 8, 2016
Verified Purchase
The first book was readable, but this book gets steadily worse from the first chapter. Thus success encourages this writer to explore concepts that he might otherwise have paused at. He introduces concepts that have implications ignored in the early world setting up in book one.

PeterF
4.0 out of 5 stars Need to read all three
Reviewed in the United Kingdom on September 3, 2019
Verified Purchase
This is a good, light-weight read. The first three books in the Legacy Fleet series are all really part of one story - once you start book one you just have to get to the end of book three to find out how it all plays out. The storyline is very engaging, making you want to keep on reading.
Read more
Report abuse

Trevor Law
4.0 out of 5 stars A rather confusing story
Reviewed in the United Kingdom on April 28, 2019
Verified Purchase
I found the political aspects very confusing. Far more so than in book 1. Overall still enjoyable but not as good s first book of series.
Read more
Report abuse

Kindle Customer
5.0 out of 5 stars Very enjoyable
Reviewed in the United Kingdom on March 8, 2020
Verified Purchase
Short like granger, damn fine read, recommend the series, very enjoyable. Now let's download the next installment. You ain't seen nothing yet!
Read more
Report abuse
See all reviews
Back to top
Get to Know Us
Make Money with Us
Amazon Payment Products
Let Us Help You
EnglishChoose a language for shopping. United StatesChoose a country/region for shopping.
© 1996-2021, Amazon.com, Inc. or its affiliates