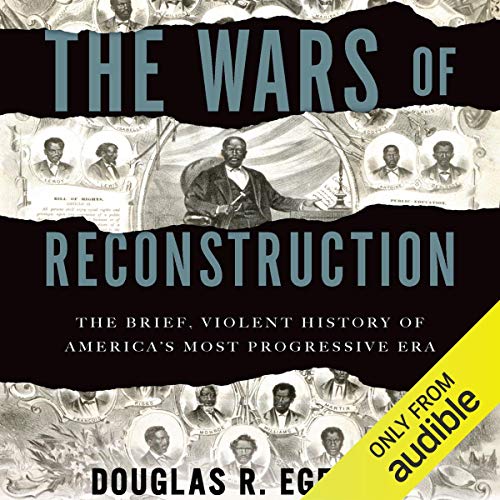 The Wars of Reconstruction: The Brief, Violent History of America's Most Progressive Era

A groundbreaking new history, telling the stories of hundreds of African-American activists and officeholders who risked their lives for equality - in the face of murderous violence - in the years after the Civil War. By 1870, just five years after Confederate surrender and 13 years after the Dred Scott decision ruled blacks ineligible for citizenship, Congressional action had ended slavery and given the vote to black men. That same year, Hiram Revels and Joseph Hayne Rainey became the first African-American U.S. senator and congressman respectively. In South Carolina, only 20 years after the death of arch-secessionist John C. Calhoun, a black man, Jasper J. Wright, took a seat on the state’s Supreme Court. Not even the most optimistic abolitionists thought such milestones would occur in their lifetimes. The brief years of Reconstruction marked the United States’ most progressive moment prior to the civil rights movement. Previous histories of Reconstruction have focused on Washington politics. But in this sweeping, prodigiously researched narrative, Douglas Egerton brings a much bigger, even more dramatic story into view, exploring state and local politics and tracing the struggles of some 1,500 African-American officeholders, in both the North and South, who fought entrenched white resistance. Tragically, their movement was met by ruthless violence - not just riotous mobs, but also targeted assassination. With stark evidence, Egerton shows that Reconstruction, often cast as a “failure” or a doomed experiment, was rolled back by murderous force. The Wars of Reconstruction is a major and provocative contribution to American history.

Unlike many of his contemporaries, Egerton does not rely on narrative stylings to tell Reconstruction’s story; instead he utilizes an array of local primary sources such as newspaper reports, case law, and various other outlets to impart the story for his audience. Almost immediately he sets a tone in which “Reconstruction did not fail,” as some Historians have long maintained; rather he states it was “violently overthrown by [the same] men who had fought for slavery during the Civil War, [continuing] that battle as guerrilla partisans” throughout the succeeding decades. (p. 19)

Arguably, his most successful chapter is the fourth: “The Lord Has Sent Us Books and Teachers;” his focus being “missionaries and community formation.” (p. 134) The shortly lived Freedmen’s Bureau assisted in the transition of slaves becoming ‘settled’ free citizens in the South. It is also in this chapter that Egerton reminds readers “that the Reconstruction era neither reached a precise conclusion nor failed to achieve all of its goals,” an important distinction to make considering segregation would continue for nearly eight more decades, before Brown vs. The Board of Education would be voted on. “Hundreds of new schools [were] sponsored by the federal Freedmen’s Bureau,” and as Egerton kindly notes- it was an uphill battle. (p. 11) Northern teachers traveled south, doing so accompanied by Union troops; the Bureau was never “elevate(d)…into the president’s advisory circle [and so] remained under military auspices.” (p. 147) Blacks had to force legislation that would require their children to maintain “regular attendance” in hopes of remedying the “forced ignorance and degradation” of their past.” (p. 148) The Freedmen Bureau had limited resources, funds, teachers, and facilities with which to indoctrinate the thousands of children, and their parents, who needed (demanded) educating; accordingly, Egerton does not shy away from the dedication and courage Northern teachers showcased. Especially in the face of homegrown terrorists such as the Ku Klux Klan.

That the Freedmen’s Bureau had such “spectacular gains in literacy” proves, according to Egerton, it’s success as an organization and the agency of Reconstruction in our nation’s history. (p. 166) The implementation of schools in the South were only one of the functions the Freedmen’s Bureau undertook, being responsible for assisting with housing, providing food, medical assistance; truly reforming “every aspect of society.” (p. 270)

At the end of the day (by the end of the his book), I believe one of the most significant take aways from The Wars of Reconstruction is that 150 years after the Civil War, after Reconstruction, we still find it “impossible to separate religion and government” and our schools are still a mess on the grounds of funding, location, and the ethnicity of student body population. (p. 143) It is impossible to do justice to any book in a review of less than one thousand words, however, Egerton puts forth spectacular effort breaking down a largely misunderstood portion of American history. He not only explicates the successes of Reconstruction, but elucidates how failures and setbacks were at the hands of homegrown “terrorists” set on thwarting true nationalism and growth. (p. 240)
Read more
8 people found this helpful
Helpful
Report abuse

Robert J. Crawford
3.0 out of 5 stars How violence and political machination strangled Reconstruction and sullied its legacy
Reviewed in the United States 🇺🇸 on February 16, 2016
Verified Purchase
This is a popular history of Reconstruction, not an academic treatment. It is very heavy on the politics and human drama, much weaker on the institutions, economics, and society.

On the positive side, Egerton argues concisely and with many vivid examples and quotes that in the aftermath of the Civil War, the "powers that were" reclaimed their place through violence and a rigging of the political system in their favor. President Andrew Johnson, a racist and narcissistic fool, allowed this to happen and even encouraged it by inaction and willful ignorance. He did this 1) by halting a plan to redistribute land ownership to the poor and the freedmen; 2) by drawing down the occupying Union troops who kept the peace, thereby enabling Confederate leaders to eject freedmen and many others from power; and 3) by allowing them to institute regimes that would repress freedmen, both via discriminatory legal structures and systematic violence (murdering and imprisoning leaders and later anyone who dared to criticize). It is a story of the most catastrophic political failure and cowardice that will taint American history forever. Unfortunately, due in part to his own failings, Grant could do little to remedy the situation, though he comes off better in this account than in others.

On the negative side, Egerton does little to explain why he views Reconstruction as the "most progressive movement" in the history of the US. Sure, freemen had to be integrated into society as full citizens, a task of exceptional complexity and challenge. Unfortunately, he fails to go into sufficient detail regarding what the institutional arrangements were required to do so and how it all would have to be implemented. You get a lot on the educators and black politicians, but I was left feeling I wanted much more on what they accomplished and why. I was very disappointed with how little context there was, particularly how what was happening fit into the international context.

Finally, Egerton does a good job of explaining how, in the aftermath of Reconstruction, a myth was generated by conservative and racist forces, predominantly from the deep south. They presented a version similar to that found in Gone with the Wind, where the south was full of gallant knights who fought for states' rights rather than simply to preserve slavery and who treated their slaves so well that they were appreciated by them with love. He tells a fascinating story of historiography, in which WEB Dubois and others produced massive works to disprove these claims. With great bitterness and sarcasm, Egerton concludes that many of the myths survive in popular culture.

You bring your expectations to a book, so the rest of my criticism may be overly personal. As a period I know fairly well, I was looking for a kind of dialogue with a unique voice, but it rarely emerged in my reading of the book (with the exception of his outrage in the historiography at the very end). This voice can offer something original or just be a brilliant narrative recapitulation, as I found in, say, Holland's The Rubicon (about Julius Caesar). Instead, what I found ranged between vivid portraits of actors and a jumbled retelling that neglected underlying causes and how the society was evolving. It simply isn't a very enjoyable read, at least for me.

Nonetheless, for some the book will no doubt be a good introduction. I think America Aflame is a far better read, but this offers a valuable perspective, I guess. Recommended with these caveats in mind.
Read more
12 people found this helpful
Helpful
Report abuse
See all reviews