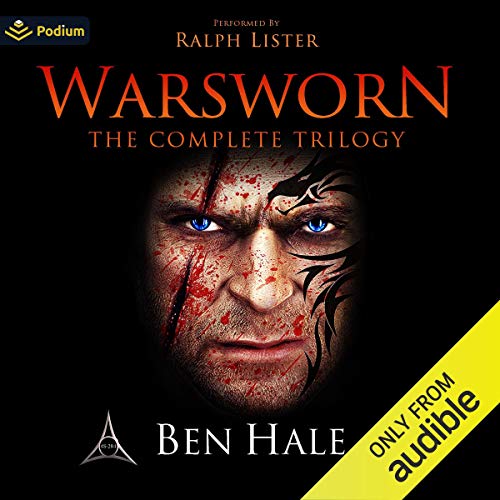 Contains the complete Warsworn Trilogy: The Flesh of War, The Age of War, and The Heart of War.

Forged for combat, the rock trolls have no equal. They train from birth, endure brutal conditioning, and mark their skin with every kill. They have become the very flesh of war and inspire fear across the globe. Now a bounty has been issued, one that calls for the extermination of their race.

Born in the midst of a bloody conflict, Tryton bears a heart of peace. His talent will command respect, but his nature is his true power. Facing foes from without and within, Tryton must wield his honor like a weapon...and rise to lead them all. If he fails, his people will be hunted into extinction, and no one will be left to protect the races for what comes.

Warnsworn marks the third series within the Chronicles of Lumineia.

Special invitation from Audible!
Learn more about Membership
List Price: $59.99
You Save: $7.50 (13%)
By completing your purchase, you agree to Audible’s Conditions Of Use
Sold and delivered by Audible, an Amazon company
Share

Curleyredhead
5.0 out of 5 stars Couldn't put it down
Reviewed in the United States on January 5, 2022
Verified Purchase
When I first heard of this book I didn't I would like it. The book is fast paced and completely engrossing. I read the trilogy in about five days. Best book!
Read more
Helpful
Report abuse

J.P
5.0 out of 5 stars Magnificent!
Reviewed in the United States on June 17, 2018
Verified Purchase
What a ride!!! This series caused me to go without sleep and held me spellbound. I endured a flurry of emotions throughout every page. Truly magnificent.
Read more
Helpful
Report abuse

rona
5.0 out of 5 stars A great book
Reviewed in the United States on November 12, 2017
Verified Purchase
I liked the white mage made me look for more books liked the second drunken war but not as much as the white mage then I read the Warsworn and it was my favorite series by Ben hall.
Read more
Helpful
Report abuse

Nagy : )
5.0 out of 5 stars Rock Trolls are my ultimate favorite
Reviewed in the United States on April 19, 2018
I truly love every book or box set. But the Rock Trolls, I get especially excited whenever I see any of their stories, or mention of their name, really my fave! Hint... remember them well, no matter what order you chose to read this trilogy in the series. White Mages are the very last. Read the whole collection straight through you will enjoy it even more. Love it!!!!! : ))
Read more
Helpful
Report abuse

Luis E Laguna
5.0 out of 5 stars Excellent!
Reviewed in the United States on January 25, 2020
Very well written. Storyline easy to follow and captures your attention. Strong powerful characters that show strength and emotions that will touch your hearts at every turn. Great read for all ages.
Read more
Helpful
Report abuse

Kizzy Todd
5.0 out of 5 stars So good !!!!
Reviewed in the United States on April 17, 2018
Loved this story line. I read this series last but it didn’t take anything away from the others. Another great book.
Read more
Helpful
Report abuse
See all reviews

Stephen clarke
5.0 out of 5 stars Great series of books.
Reviewed in Australia on July 30, 2016
Verified Purchase
An excellent series. Well written, engaging and faced paced. Thoroughly enjoyed the journey from start to finish.
Read more
Report abuse
See all reviews
Back to top
Get to Know Us
Make Money with Us
Amazon Payment Products
Let Us Help You
EnglishChoose a language for shopping. United StatesChoose a country/region for shopping.
© 1996-2022, Amazon.com, Inc. or its affiliates