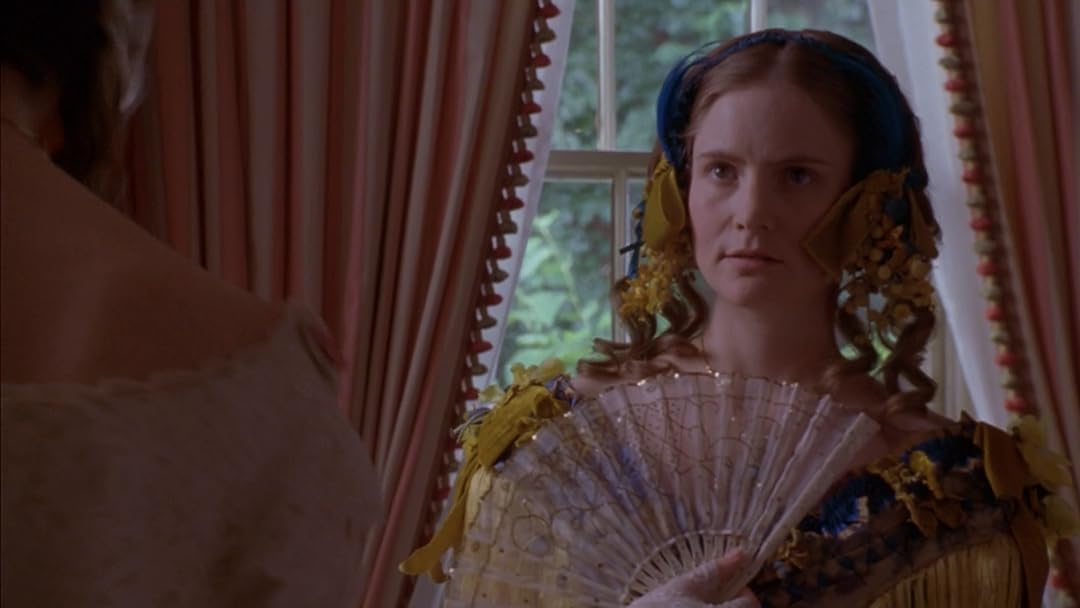 (489)
6.71 h 55 min1997PG
A lonely young woman in search of happiness is finally swept off her feet. But her father's doubts of the young man's intentions threaten to end the relationship.

Nick ZegaracReviewed in the United States on January 14, 2019
1.0 out of 5 stars
Zero stars for dull retelling of Henry James' haunting novel
Verified purchase
In 1949, Olivia de Havilland won an Oscar for her portrait of this wallflower to end all wallflowers in William Wyler's The Heiress. This remake from 1997 restores author Henry James original title and more of the author's intent too, I suppose, but is hampered by ineffectual performances from Jennifer Jason Leigh and Ben Chaplin; neither pulling their weight in this very weighty picture. The real stars here are the supporting cast, Albert Finney, Maggie Smith and Judith Ivey; absolutely wonderful. Still, they cannot save the picture. But what is going on with Kino Lorber accepting such a substandard video master from Disney Inc. for this Blu-ray. Contrast is absurdly weak, colors wan, and age-related artifacts everywhere, with image softness to boot. Watching this disc in a completely darkened room, it is possible to muddle through these deficits. But honestly, this presentation in no way captures the theatrical experience. Badly done!
10 people found this helpful

ChannahReviewed in the United States on April 11, 2021
3.0 out of 5 stars
More context is provided (However, the DVD does not play past the first half-hour)
Verified purchase
This re-make in color tells a fuller story (starts earlier in the persons' lives and provides more background and context than the classic 1949 version). ... It is well acted, presented, and composed so far (have not seen past about the first 40 mins. because the DVD arrived defective, which is 90 percent of the 2.5 star rating). ... Thankfully it is rated PG; thus, humans can see it without unnecessary aspects in the film such as profanity. ... It was filmed mostly in Baltimore, Maryland - which is quite cool.

/ There is a certain aspect of richness and 'authenticity' in the original film called "The Heiress," (1949) with Olivia de Havilland. To some extent, this more current version has this as well, and it's an excellent story to see in full color, given some of the aspects, features, and scenes.

(Epilogue: on Internet i was able to see the ending of this version, which is less harsh and draconian than "The Heiress.")

rmostrowReviewed in the United States on May 2, 2017
5.0 out of 5 stars
The great Albert Finney
Verified purchase
The great Albert Finney, the great Jennifer Jason Leigh, the great Maggie Smith, the great, Oscar-winning (SCHINDLER'S LIST) production designer Allan Starski, carry us back to New York's Washington Square as seen through the eyes and the pen of that master of character and nuance, the novelist Henry James. Based on James' novel, and NOT on the very entertaining stage adaptation THE HEIRESS, WASHINGTON SQUARE is a meticulous recreation of a moment in history: social, cosmopolitan, and literary history. Heartrending, sensitive characterizations set in a letter-perfect period setting make this film a classic. Highly recommended!
14 people found this helpful

NaturalbohemianReviewed in the United States on September 29, 2015
5.0 out of 5 stars
This movie deserves a place in your dvd library!
Verified purchase
My husband and myself both really enjoyed this movie. I thought the acting by Jennifer Jason Leigh was quite good and also by Ben Chaplin. But I felt Albert Finney was superb! I also very much enjoyed the book. Yes, they may have exaggerated her character to some degree, but being a person who suffers from social anxiety, and who also went through a supremely shy period in my adolescence, I can relate. They may have made her more inept in the movie, but I feel it didn't ruin the movie, as I just viewed it as her being someone who grew up in a household devoid of real love or any proper guidance for her lot in life. Plus the fact that she felt inferior because of that lack of love, and her fathers seething and insidious resentment and disappointment in her.
I normally, as I do now, rate a movie on it's superb and subtle acting and it's ability to be thought provoking and moving, which this movie had to some degree, but I did also enjoy the beauty of the film that was brought about by the direction and set design of Agnieszka Holland.
No, I would not put it on my top rated movies for acting ability, though, as I already stated there was some solid acting, and Albert Finney was a wonderfully awful father, with nice subtlety, and I really enjoyed the acting of the woman who played Albert Finney's sister - though I cannot remember her name.
All in all, for a modern American movie I feel it was about as top quality as you're going to get any more. There was a bit of caricaturistic acting by Maggie Smith and some light acting by others, but still somehow it was intriguing and enjoyable. I felt it was compelling and very interesting, and very poignant. I also feel the subject matter of the plainness (or less pejoratively - averageness) of a woman's appearance affecting her value as a desirable human, or wife is quite a sad commentary on societies mores and values.
That being said, I loved the movie! And I felt deeply for Catherine's unloved, devalued and tread upon character. I felt the ending had so many captivating emotions and reflections to chew upon.
I would definitely recommend this movie to those who don't depend upon the special effects and magical thinking of Hollywood to entertain them, but like good acting and good old fashioned stories, that absorb your thinking and emotional processes.
8 people found this helpful

Kindle CustomerReviewed in the United States on February 10, 2021
1.0 out of 5 stars
Vomitous
Verified purchase
Where do I begin.

This retelling of the 1949 classic The Heiress fails on every conceivable level. And I'm a very forgiving moviegoer.

Even for one familiar with the story, it's impossible to feel the stakes, the story beats.... Every act, every scene, every relationship is equally ambiguous, muddled, and blase. With characters poorly drawn, poorly written, and executed worse. No character has any arc or seems to change or learn anything. Catherine is as weak and confused and defeated by the end of the picture as she was in the beginning.

Granted, the script from 1949 contains some of the best dialog ever written for the screen, for my money. So the bar is set high.

But I was hoping for something that came at least reasonably close.

And please don't bore me with dribble about being true to the original novel. Anyone familiar with the film medium knows you have to be truer to your script than the original work. People don't go to movies to read them. They go to watch them.

Writers who fail to achieve excellence because they focus on being ethereal, nebulous, edgy, without adequate talent just end up generating works that are confusing and boring.

Take it from me, stick with 1949.
2 people found this helpful

Anon-E-mouseReviewed in the United States on May 20, 2013
2.0 out of 5 stars
The Faux British accents quite irritating
Verified purchase
This is a compelling story about a wealthy physician who resides in New York. He loses his wife and son to birth complications. He has a daughter Catherine who is plain but sweet daughter. A young dashing fellow takes a deep interest in her, he treats her like she is the most beautiful woman he has ever met. Her father thinks he is a gold digger and goes to great lengths to protect her, she on the other hand is convinced its true love......who is right? The movie is well made, the characters have depth and the plot is well developed. This great novel has been compared to Jane Austen's works, which is all well and good....unfortunately Agnieszka Holland, the director, never fails to find a way to ruin a good thing. She tries a little too hard "Austen-ize" the story. She edits all signs of New York from the story, It took me a while to realize that the story takes place in New York and not some English Lord's estate in the British countryside. I found the faux British accents and mannerisms very distracting......the accent is a cross between American actors with a bad British accent and British actors with bad American accents......Was it really sanitize all things American from this movie? Washington Square had so much potential....sigh....i suppose i will always have the book.
9 people found this helpful

taajReviewed in the United States on February 16, 2015
4.0 out of 5 stars
Dark, and Leaves You With More Questions Than When You Started
Verified purchase
Washington Square was based on the book of the same name by Henry James, the author who also wrote Wings of a Dove and Portrait of a Lady. Going in, it helps to know that he is known for realism and also the dark nature of his work. If you are looking for a rollicking good time or romance, this is not it. This is more of an anti-romance.

The story is an entertaining one, even if it is somewhat confusing. The characters are not as fleshed out as they are in the book, so everything that hinges on having a clear sense of character (meaning everything), is weakened. It holds together, but is not as psychologically satisfying as it could be.

The actors are solid, but Leigh is a bit off. It's not her acting. She does a great job of being naive, then later, disillusioned, but she is just too old for the young part. It's distracting.

If you are looking for something different, I'd give it a shot. This is definitely not your typical Hollywood flick. It leaves you wondering... which is a good thing.
3 people found this helpful

P. A. HallReviewed in the United States on January 31, 2015
5.0 out of 5 stars
Washington Square or The Heiress, both worthy of a watch
Verified purchase
Jennifer Jason Leigh's performances have been wonderful in every movie I have seen her in and this is no exception. She gives a stellar performance as a terribly wounded, but resilient character. I also enjoyed The Heiress, which was a play adaptation rather than a book adaptation as was this movie. I have to say, though, I think the WS version has a more uplifting ending then the revenge filled Katherine at the closing scene of The Heiress. In that movie she turned as heartless as her tormentors. It made for great drama, but in WS I like that Katherine redirects her devotion, rising above the men who were not worthy of her love in the first place. Though Olivia D's ending was more dramatic, this one gave you a better feeling at the end. Both movies are jam packed with great performances from talented casts. You really can't go wrong with either one. Henry James created memorable characters to be sure!
5 people found this helpful
See all reviews
Back to top
Get to Know Us
Make Money with Us
Amazon Payment Products
Let Us Help You
EnglishChoose a language for shopping. United StatesChoose a country/region for shopping.
© 1996-2022, Amazon.com, Inc. or its affiliates