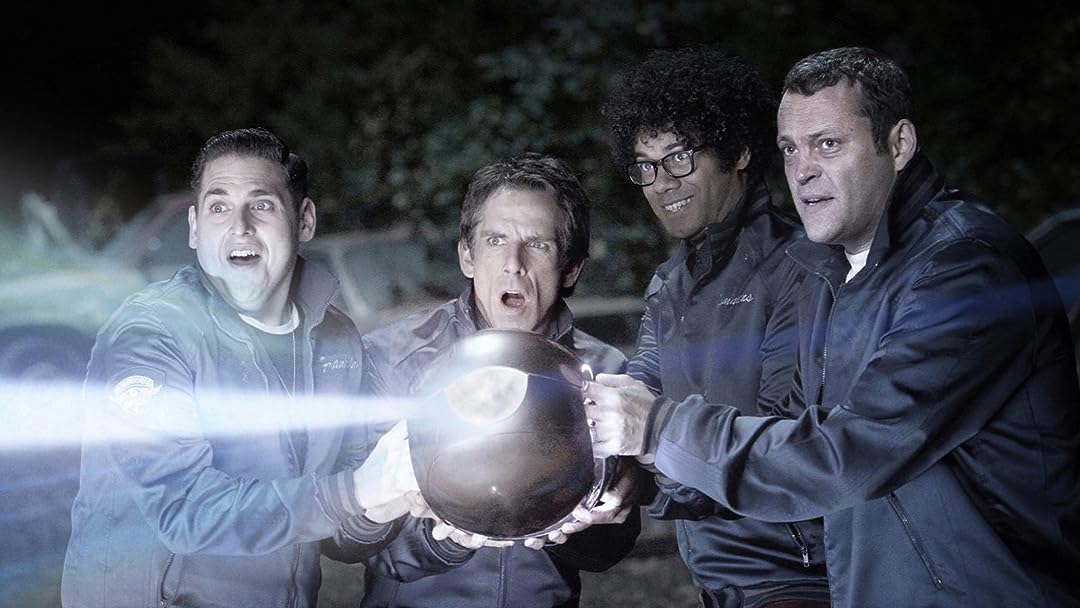 DanielReviewed in the United States on January 13, 2022
1.0 out of 5 stars
One of the worst movies I've ever seen
Verified purchase
Stiller, Vaughn and Hill are obviously at the end of their careers. The humor is worst than sophomoric and none of the scenes are believable. This movie brings stupidity to a new level. Worst of all, it's obvious Hollywood hates most races in the world. Bigotry and hypocrisy rings throughout the movie. The sexual humor is gross and it appears Hollywood has penis envy. As with most Stiller movies, it tries to end in sincerity, but lacks anything genuine.
42 people found this helpful

SamReviewed in the United States on May 24, 2020
1.0 out of 5 stars
Sheer Boredom
Verified purchase
The Watch commits the worst crime a comedy can: it is in no way funny. It simply feels phoned in, as though this movie is the first draft of script that desperately needed the attention of a writer with talent. And a director with talent. And some comedians who have talent and are willing to do some work. The plot is generic, characters are uninteresting, I'm not convinced any of the leads were trying to act, and the "jokes" are unimaginative. There is nothing to commend here, and nothing worth watching.
31 people found this helpful

ZacReviewed in the United States on April 29, 2021
5.0 out of 5 stars
Love it
Verified purchase
This movie is the best. I mean if you haven't seen it or don't know what you're getting into maybe rent it first because its a Bad movie, but this type of bad is Right up my alley. I watch it all the time. I'm a little confused with all these negative reviews for Buying a movie? Rent it then.. Or the people who knock it for bad language? 1. it's a comedy, what did you expect 2. Did you not watch the trailer?!? Richard Ayoade literally says I want an Asian house wife to suck my ***** in it.. I mean.. if that ain't a red flag than there's no hope for you...
I Gave it 5 stars to offset the bad reviews where people simple didn't use common sense, but I would have given it a lower score just because it doesn't say that the digital copy expired in 2014.... I kind of bought it just for the digital code, oops. I figured it was an older code that could expire (new ones don't), so kind of saw that coming, and probably could have research it and found the answer, but for $10 and 2-day delivery I figured I'd just find out the hard way.
16 people found this helpful

DTTECHReviewed in the United States on September 29, 2018
2.0 out of 5 stars
FILTHY LANGUAGE
Verified purchase
The story line was very good and funny. However, the totally unnecessary filthy language that was pouring out in every scene destroyed the movie for me. Definitely not what I expected from the cast that is in this movie. Extremely disappointing! It gets 2 stars only because the story line was good. Otherwise, I would give it a minus 10!
39 people found this helpful

Jeffrey E. FullnerReviewed in the United States on December 28, 2020
1.0 out of 5 stars
Perverted Profanity
Verified purchase
This movie had a lot going for it but the director seemed to have a love for senseless and perverted profanity. It would have been an excellent teen movie had it not been for the warped mind of yet another Hollywood blunder of values obtained from the sewer. It’s a great embarrassment for all ages. Refund requested.
16 people found this helpful

Ben Stiller plays Evan Trautwig a manager at Costco who decides to set up a neighborhood watch group after his friend, a security guard named Antonio (Joseph Nunez) at Costco is mysteriously killed. The group collects together a number of misfits starting with Vince Vaughn as Bob, Jonah Hill as Franklin, and Richard Ayoade as Jamarcus.

The movie hits the right note from the start when Antonio gets his citizenship and parties while doing his night watch at Costco. He listens to NWA, dances, watches big screen TV on a lounge chair before something kills him. When the neighborhood watch is brought together it’s nothing but trouble because of the cast or characters that join. Bob for example, thinks the Watch is a hang out group where he can get away from his family. He gets them to come over to his mancave at his house for drinks and a shouting match with his daughter. He then makes jackets for the group with a tiger’s face, wings and flames. Franklin on the other hand is a bit of a sociopath.

It turns out Antonio was killed by an alien. That’s made fun of as well when they think they’ve killed one they decide to take photos and dance with the body only for it to come alive on them. Evan tries to put a sleeper wrestling hold on it, which of course fails.

Ultimately there are some funny parts to the Watch but it doesn’t pay off in the end. There are some parts that don’t seem like they had any part in the story. Some better editing would have done this movie wonders.
C

C. JackReviewed in the United States on January 24, 2022
5.0 out of 5 stars
absolutely loved it
Verified purchase
I was searching for something lighthearted and fun, and came across this film. With Stiller and Vaughn, I didn't thing I could go wrong. This was like Tropic Thunder of the alien invasion genre. The characters played well off each other, and I didn't fast forward out of boredom. The tone was set when the control freak played by Stiller was bested by Vaughn's man cave. Lots of little funny puns plus the craziness of an adolescent just added to it all. I'd watch it again.
7 people found this helpful

Baba GanushReviewed in the United States on May 14, 2022
5.0 out of 5 stars
What an adventure!
Verified purchase
Comedy aside, this was as perfect a story as a film can get to. The most amazing thing about it was Ben Stiller did not overact in any scene. I just flat out liked it.

Of course, it was sophomoric in its themes, but it didn't try and fool you. Any film that groups Vince Vaughn, Jonah Hill, Richard Ayoade and Ben Stiller is not going to rely on adult themes. There's going to be bad language and a plethora of jokes about genitalia throughout.

The reveal midway through Act 3 was fabulous. Franks and Beans' actions were inappropriate at times but not out of character. This film stuck to its guns and never deviated from the premise. The pacing was good, and it slowed down to let you catch your breath right before it went ballistic. Mad respect.
4 people found this helpful
See all reviews
Back to top
Get to Know Us
Make Money with Us
Amazon Payment Products
Let Us Help You
EnglishChoose a language for shopping. United StatesChoose a country/region for shopping.
© 1996-2022, Amazon.com, Inc. or its affiliates