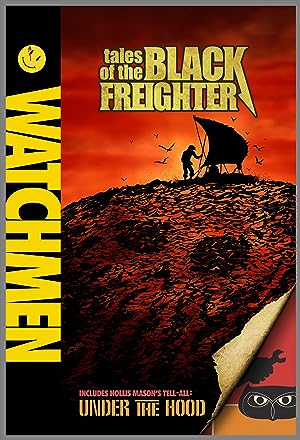 Watchmen: Tales of the Black Freighter & Under the Hood

(266)
7.12 h 4 min2009R
As superhero Dr. Manhattan abandons Earth, leaving its fate hanging, a boy reads a survival tale about a doomed sailor who goes mad while returning home from being marooned.

ManifestaReviewed in the United States on October 9, 2020
3.0 out of 5 stars
The animation doesn't live up to the drawings in Watchmen.
Verified purchase
When i read Watchmen, the part I found most engrossing was the comic book that one of the characters was reading, Tales of the Black Freighter. When I found out there was an animated version of the story, I had to see it. Unfortunately, the drawings in the graphic novel are very richly illustrated, while the animated film is much simplified, leaving out much of the detail that made the comic book within Watchmen so good. If you've never read Watchmen, this isn't bad on its own, but I found it disappointing.
3 people found this helpful

NET 7Reviewed in the United States on July 9, 2015
4.0 out of 5 stars
Worth renting to see, but skip owning.
Verified purchase
My review is of the documentary and not the cartoon of "Tales of the Black Freighter", because I completely skipped it over since it never attracted my curiosity. However, "Under the Hood" was the reason I bought this video, and I really enjoyed it. I've always been a fan of documentaries, and watching this "documentary" lol was an enjoyable experience. I got to learn a little more about the characters and the differences between the characters in the film and in the comic book as well as the contradictions in each. For example, you see that the Night Owl of the film was in love with the Silk Spectre while in the comic series he was in love with Silhouette. Looking over my purchase I probably should have just rented this rather than purchased.

Aaron ShermanReviewed in the United States on March 25, 2009
4.0 out of 5 stars
Tales is only a preview
Verified purchase
Essentially, Tales of the Black Freighter (along with Under the Hood and the behind the scenes footage) is either an epilogue for those who have just seen the movie or a preview for those who cannot await the Watchmen special edition DVD which will contain all three works (movie, Hood and Tales) all woven together the way they were in the book. As such, the price is a bit steep, which is the only reason I've rated this at four stars instead of five. Tales is beautifully rendered and voiced. Under the Hood is a bit slow, but then it was all text in the book, and in essence provided a break in the pacing of the story, so I'm not sure that this is a mark against it.

A note on Blu-Ray: Tales is supposed to feel like a comic book. The Animation harkens back to 1970s/80s fare such as Heavy Metal, and really doesn't benefit from the hyper-sharpened, line-for-line picture of my Blu-Ray copy. I'd actually suggest DVD format for this one if you have a less than 40" TV or a good upscaling DVD player.

Christopher CarantitReviewed in the United States on May 18, 2009
5.0 out of 5 stars
A Whole New Experiance
Verified purchase
Before I ever sat down in a movie theater to the "Watchmen" motion picture I read through the Watchmen Graphic Novel. When I did so I was introduced to the concept of a superhero that does not always do the right things and does not always save the world without so much as a single casualty. I was introduced to men and women who are flawed in many ways, but who had the skills and the charisma to do what they considered the right thing to do for the benefit of the world's people's. Within the pages of Watchmen was a side story that mirrored the main story and it was called "Tales of the Black Freighter." Though I read through the story of a shipwrecked sea captain whose determination to save his loved ones drove him to the brink, I felt that the dvd brought new life to the story. In the graphic novel you are focused on the Watchmen story while this other one slides in and out of focus. With the story being told in one cohesive storyline along with Gerard Butlers emotional narration made me really feel and care for this story and its bitter ending. I would also suggest this dvd for people who are also just simply looking for good emotional story telling. The "Under The Hood" documentry ,if that is what you could call it,is also an interesting piece to watch for fans of the movie or graphic novel and it also makes this alternate timeline that the novel and movie are based around feel real by adding in commercial breaks with referances for people who know their "Watchmen."

mikeReviewed in the United States on February 23, 2020
2.0 out of 5 stars
This DVD is not worth purchasing
Verified purchase
The order was just as described. I had no issues with the seller. The only problem is that I had no idea that this was a very short film, and its not about the watchmen.

ExplorerReviewed in the United States on August 22, 2009
4.0 out of 5 stars
WATCHMEN FAN MUST HAVE!!!!
Verified purchase
As a newly introduced fan to the Watchmen Comic novel, I have to say I thoroughly enjoyed the Captain's tale against the Black Freighter but I appreciated the story even more so in the "Watchmen Motion Comic" because one could see the parallels in both stories. That of the captain and the watchmen.

"Under the Hood" was also pretty good. For those of you who have only seen the movie, you will enjoy it because it tells the story of the original super heroes "The Minute Men."

RAUL MELENDEZReviewed in the United States on July 21, 2021
3.0 out of 5 stars
3 Stars!
Verified purchase
It's a nice story from the watchmen universe.

Alonso R. McminnReviewed in the United States on October 7, 2019
5.0 out of 5 stars
Fast service, disc played without a hitch. Yay!!
Verified purchase
Didn't know about the reputation of the comics. Never saw any of the comics. But the movie was a trick.
Kind of dark but kept you in suspense right up to the final 15 minutes. Watched it several times. A hoot!
See all reviews
Back to top
Get to Know Us
Make Money with Us
Amazon Payment Products
Let Us Help You
EnglishChoose a language for shopping. United StatesChoose a country/region for shopping.
© 1996-2022, Amazon.com, Inc. or its affiliates