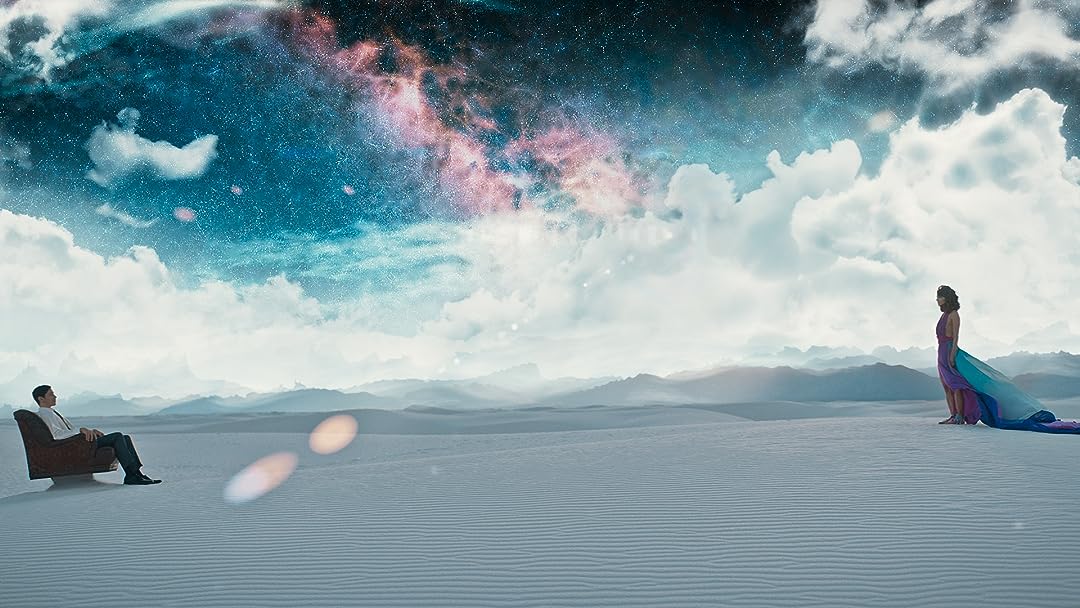 (1,692)
6.11 h 27 min2020X-RayR
When Frank goes out on the town to celebrate an upcoming promotion, his night takes an unexpected and bizarre turn when he is dosed with a hallucinogen that alters his perception and changes his life forever.

To me the movie made total sense... sure it took me until over halfway through the movie to figure it out, but it starts hammering the point home more and more toward the end of the movie.

Frank is supposed to be unlikeable... He's a crappy person. He's an attorney working for a big company, screwing over families who lost loved ones, or people who made financial mistakes. He says he's "just doing his job". He's also in a bad marriage and has taken to flirting with women at bars and going to parties with them. But Frank thinks he's a good guy, or at least wants to be a good guy. But he's clearly lying to himself.

So then he takes the drug, and starts losing time, skipping around to different scenarios. This is actually happening "for real". We know this because all of the third party observers are freaking out about how he's randomly disappearing, how he managed to get a homeless person to show up with hundreds of thousands of dollars while being held captive, and his friend Jeff questioning how he's doing all of this. So if everything was real, what was the point of it all?

Jeff needed to learn he was a bad person and needed to figure out how to right his wrongs. He needed to make amends with the family he was trying to screw over at his business. He needed to fix things with his wife, and he wanted to help take down his evil boss who was worse than he was. All good deeds.

In the end, the universe guided Jeff to sacrifice himself to fix things. This gets repeated throughout the movie with people telling Jeff to "just listen", and "the universe provides" and "karma is a bitch". All of this is pointing toward the universe speaking to Jeff and guiding him toward "balance".

My alternate theory is that when he took the drug, he saw what remained of his life and was able to skip around in it up until the moment he dies. This is also backed up by the fact that "the guy" and the girl he's interested in both seem to be "Angels" trying to guide him to Heaven. He gets glimpses of both Heaven and Hell in various scenes of the movie. When he's laying in the field staring up at the beautiful sky, this represents "Heaven" and when he's in the board room and the staff are going demonic, it's "Hell". It shows the worst in people and pulls it to the surface.

Though the whole board room scene could also just be the universe trying to not so gently show Jeff that being a bad person makes you into a literal demon.

Overall I enjoyed the movie and I think people looking at it like "oh they are just trying to be flashy/trippy with no point" aren't really seeing the movie the way it's meant to be seen. It isn't particularly deep or thought provoking... It's basically A Christmas Carol but on drugs. Scrooge/Jeff is kind of a crappy person, sees what his actions would lead to, and then corrects things before its too late.

Justjeans23Reviewed in the United States on February 24, 2021
3.0 out of 5 stars
SPOILER ALERT!!! Good film but could have been a bit clearer
Verified purchase
SPOILER ALERT!!! Ok, I think the movie was a bit confusing in parts due to either lack of character development and plot BUT it was interesting and kept me wanting to know what happens next. So, after reading some reviews of the movie, I discovered that he isn't actually "tripping " he is dying. The movie is sort of based on a twist of "The Christmas Carol " when Scrooge meets with the angels of Christmas past, present and future. I assume the the girl he is with and the drug dealer are like angels sending him on a journey to right some wrongs before his death. Hope that helps some of you. I got this information btw from Roger Eberts review of this film which you can find online.
32 people found this helpful

S GravesReviewed in the United States on June 10, 2020
5.0 out of 5 stars
EXCELLENT
Verified purchase
I was surprised how good this movie was, honestly. Really well done on every level, especially for a fairly low budget affair. I won't give an elaborate review, but if you're into this sort of thing - cosmic purpose, altered consciousness, existential issues, etc. - and pondering renting this movie, DO SO. I can't imagine you won't enjoy it. It's a fun ride with a good message.
26 people found this helpful

joel wingReviewed in the United States on August 2, 2021
4.0 out of 5 stars
Bizare ride through reality which ends with Karma and balance in the universe
Verified purchase
If you ever wanted a warning about not going to some strange party and taking an unknown substance from a stranger then this movie would be it. Justin Long is a frustrated square lawyer who takes a drug at a party and has his life changed forever. He goes through a bizarre ride through reality which leads to the name of the film The Wave. It’s not just an acid trip of a plot however. It actually comes to focus upon Karma and everyone’s place in the universe. You just need to stick with it to see a very fulfilling end.
16 people found this helpful

Nic RReviewed in the United States on January 5, 2022
1.0 out of 5 stars
Got 3/4 of the way through
Verified purchase
Where to start. The characters are unlikeable. I wouldn't want to hang out with any of them.

Within 10 minutes the wife is being set up as wholly unlikeable. It was such a blatant setup and based on such flawed causation that it clearly indicated it was a device only there to serve the plot later on. Perhaps to be forgiving of the main character if he cheated on his wife?

The opening scene was a disastrous scene on every possible level. The interaction with his wife was so unnatural that I was yanked out of the film right then and there and spent the next hour trying to get back in. But the characters' development, the dialogue, the direction, their interactions are so incredibly poor, it was impossible.

Main character ends up at a party with, yes, another woman. Surprise (yawn) surprise. She too is wholly unlikeable. The girl his friend hooks up with is as unlikeable and the friend himself is bland and completely uninteresting. These two uninteresting unlikeable characters end up in a room with a drug dealer pushing some unnamed chemical substance as two women make out behind him. He's obviously unlikeable, but worse, he's not even interesting.

The main character is such an idiot that he goes from refusing to take the drug to agreeing to take it once the drug dealer tells him the correct way to consume it is off of someone else's tounge. So this lascivious main character changed his mind and accepted to take a non-named illegal substance if it meant he could make out with this other unlikeable, uninteresting character. So not only is he unlikeable and uninteresting but an idiot. Then you feel like the girl he hooks up with is too because she's attracted to this guy - even after she's correctly identified his job is a morally compromising one. She doesn't care. So now I like her and care about her even less.

It's alright to have unlikeable characters as central. The only challenge at that point is to make the viewer care about the character, even if we don't like them. Harvey Keitel in Bad LT is a good example. Harvey's character is repulsive, but the story is told in such a way that you care about what happens to him and the people around him. That's a bit to do with the dialogue, a bit with direction and the actor's capacity to keep you believing them.

The special effects look like something from the 90's. The acting was credible from the 3 main characters, but everyone else felt amateurish, especially the mistress' friend and the drug dealer, who literally CANNOT ACT. Script and direction were amateurish. It's disjointed, it's rudderless and the time travel aspect could have been removed entirely with zero impact to the plot. Just make it some messed up drug trip and voila. I feel like whoever concocted this garbage was just trying to appeal to sci-fi fans, like me without having any pedigree on the subject of time travel. Or sci-fi. I think their pedigree was more in hallucinogenics, which you have to be an idiot to take in the first place.

After he gets in the car and bangs the dashboard in frustration only to find that he has again been transported in time, (a few hours forward anyway) that's when I said, "enough of this garbage.". This feels like another film made in Southern Oregon by film students.
5 people found this helpful

Gregory E. CliffordReviewed in the United States on January 27, 2020
5.0 out of 5 stars
Groovy
Verified purchase
I love it when I find little gems like this. This is one trippy time travel movie.
18 people found this helpful

Scott S.Reviewed in the United States on December 17, 2021
5.0 out of 5 stars
A twisted ending that I finally understood
Verified purchase
So many times, movies like these, end and make me wonder: WHAT THE HECK?! Well, this movie was kind of like that... one of those you have to see twice maybe? But I understood the ending and didn't have to run to Wikipedia to find the answers. For that one reason alone, I give it 5 stars.
6 people found this helpful

RobertReviewed in the United States on January 27, 2020
5.0 out of 5 stars
Well rounded great movie.
Verified purchase
Refreshing, clever, funny at times, thoughtful. Great acting. Great visuals and vfx.
14 people found this helpful
See all reviews
Back to top
Get to Know Us
Make Money with Us
Amazon Payment Products
Let Us Help You
EnglishChoose a language for shopping. United StatesChoose a country/region for shopping.
© 1996-2022, Amazon.com, Inc. or its affiliates