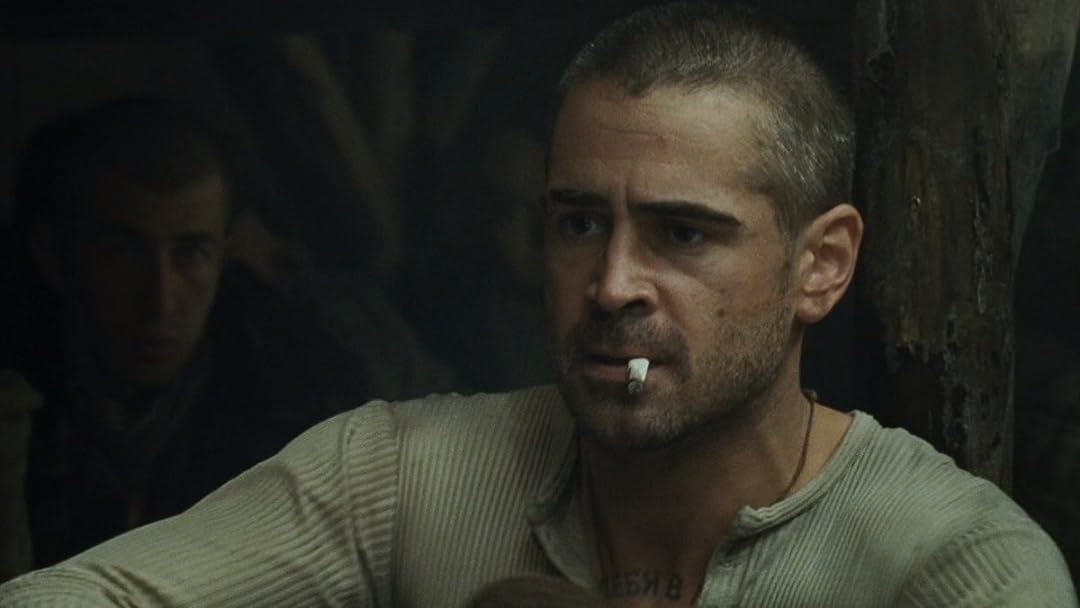 (2,306)7.32 h 13 min2011X-RayPG-13
A small band of convicts stage a daring escape from a WWII-era Siberian gulag, and embark on a journey across five countries in a race for freedom and survival.

qajaqrReviewed in the United States on November 2, 2018
4.0 out of 5 stars
This film is loosely based on...
Verified purchase
... a book that is loosely based on a story from a man that had a casual relationship with the truth. Even if it were true I still would have a hard time believing 4 men survived what must have been a walk of some 4000 miles through blizzards, starvation, sandstorms, dehydration, impenetrable forests, 15000 foot elevation mountain ranges, clouds of insects and knee deep swamps after having suffered the deprivations of a Soviet gulag. They would have started that journey, in a Siberian blizzard, in poor health, few clothes and what food they might squirrel away from their already meager rations.
No.
While I was reminded of Henley's Invictus in trying to get into the mindset of the ones doing the trudging and slogging, some things are simply impossible for a human. The journey that inspired this film was just not possible. A regular competitor in triathlons could not do this. A group of professional marathoners couldn't do this. So, I had a problem with the veracity of the premise from the outset, and when I saw what they had to do to survive, I was certain the whole claim was a sham. That took a lot of the authenticity out of the characters and scenarios for me. But, it was still a good movie, a very good movie.
This film is beautifully done. The makeup was nominated for an Oscar. The cinematography should have been, but then what would I expect from a film produced in part by NatGeo ? I should have gone to see it at the cinema. The acting is first class. Ed Harris really filled the part of Mr Smith, the others were just as good in their characters, but Harris stood out. The sound was impressive, even and rich throughout, and the lighting was superb. I did not see one double shadow.
This movie is more than watchable, if you have a spare 2 hours, but keep the water glass handy. I have never been made thirsty by a film, but I got up for water twice in the second half.

Colonel AngusReviewed in the United States on April 2, 2020
5.0 out of 5 stars
This movie is about me, only it happened last Thursday.
Verified purchase
I escaped from a Russian Gulag in a blizzard wearing only a speedo and flipflops, fought off wolves with my bare hands and some hi karate, hiked over mountains higher than Everest, through hostile villages with aliens waiting to kill and eat me, then 1500 miles through the desert with no more than a bottle of water squeezed and filtered from urine, it wasn't my urine either.

This is my story and I stand by the facts of this movie, I am the king...all hail me!

Hugh E. WilsonReviewed in the United States on December 3, 2019
5.0 out of 5 stars
A Film Every Millennial Should See
Verified purchase
This film scores big in a number of categories. The screenplay is at worst, very good, borders on excellent. The cast is outstanding. But the overarching best quality is the story itself. The level of cruelty that men are willing to impose upon one another never ceases to sadden me. But my sadness is ultimately relieved by my faith in the strength of the human spirit. My concern though is that modern day youth are not taught much about the evils of collectivism and the horrors it engenders. This film is both frightening yet filled with hope and inspiration. Every youth should see it.
19 people found this helpful

HistoryNutReviewed in the United States on September 6, 2016
4.0 out of 5 stars
A Nice Film About A Little Known Topic
Verified purchase
A nicely packaged human interest story about a mixed group escaping from Siberia to India in early WWII. Tragedy is all around and occasionally visits this group. The cinematography is excellent and the varying landscapes right out of National Geo. Most of the main characters are well developed led by a mix of better and lesser known actors.

There is not a huge amount of modern bling in this film so one has to like this genre to stick with it. The film also moves rather quickly between landscapes over a several thousand mile trek to fit in 133 minutes leaving one feeling a lot of character interaction was missed giving it a documentary sense at times. But I thoroughly enjoyed the actor ensemble and their creditable portrayal of events.

Me2Reviewed in the United States on March 24, 2021
5.0 out of 5 stars
Long movie, but fitting for the story...
Verified purchase
Definitely doesn't soften the hardships these men endured in the brutal Stalags of Stalin; so horrific they were willing to risk their very lives in escaping this sadistic prison (as bad as Nazi Germany). What's the deal with the Russians and Germans being so barbaric?? And we're not talking about Medieval times, either..
The run for freedom which doesn't come for a looooooong time on their walk from the Siberian camp all the way to Tibet & beyond. The harshness they endured as they pushed on, the ones in their number they buried, and their interactions with each other keep you watching.
The spirit of being free shines through once again.
Communism, socialism, fascism just doesn't allow for that in any shape or form; those who think that any such philosophy and system of governance is a utopia if only "they" institute it are so ignorant of history. NO WHERE any of these have been "tried" worked out well even for the ones at the top (bc eventually they met their downfall). Wake Up, America! The slide into socialism is here :(
2 people found this helpful

Tim F. MartinReviewed in the United States on August 23, 2021
4.0 out of 5 stars
Grueling survival film with excellent cinematography
Verified purchase
The Way Back (2010), an American survival film directed by Peter Weir. The film is inspired by The Long Walk (1956), the memoir of World War II Polish prisoner of war Sławomir Rawicz, who claimed to have escaped from a Soviet gulag and walked 4,000 miles (6,400 km) to freedom in World War II. My understanding is there are doubts about his story of how he and six others escaped a prison camp in Siberia and walked 4,000 miles, travelling through Siberia, the Gobi Desert, Tibet, and the Himalayas before finally reaching British India. Whether a true story or not, that's pretty much the story of the film.

The movie, after establishing how awful a Siberian gulag is, doesn't spend a great deal of time there before Polish army officer Janusz Wieszczek (Jim Sturgess) and seven others escape the camp one horrible stormy winter night. The other escapees stand out to varying degrees, the main ones to me being Mr. Smith (Ed Harris), an American engineer, and Valka (Colin Farrell), a hardened Russian criminal. Later on they pick up another escapee from a different place in Siberia, Irena (Saoirse Ronan), a young Polish girl.

It's a grim movie at times though never cruel. The group gets smaller as they make their way south and have to deal with a lot of hardship. The Gobi Desert scenes were definitely memorable and epic though lethal for several. In many scenes the cinematography was fantastic. I liked how though there was some group in fighting the antagonist remained the environment. Also some character arcs for several characters, even among those who didn't make it to India. Lots of time is spent in Siberia after escaping the camps and in the Gobi, but surprisingly little time I thought in the Himalayas by comparison.

26.2 ManReviewed in the United States on June 18, 2016
4.0 out of 5 stars
Good Movie, But Do Read The BOOK
Verified purchase
"A movie "Inspired by..." a book" is quite an ambiguous phrase. The work stands on it's own, but you'll be better inspired by a few readings of the book, and the though of all those unknown persons who tried and failed to escape communist or other ideologically inspired brutality. Also, this flick is for you if you're a fan of good sets and scenery. ...and hats off to Ed Harris for accepting and executing such a variety of roles...
23 people found this helpful

Iam UnoReviewed in the United States on May 30, 2014
5.0 out of 5 stars
An Unsung Movie With Impact - A Great Story, Screenplay, Cast, And Cinematography - One You'll Never Forget
Verified purchase
Wow! What a breathtaking, deeply moving, enlightening and inspiring film!
I was not aware of this story, but, boy, if you need a story to give you lifelong inspiration when you think you've lost the will to keep on keeping on, this is it!
It's one of the best and most memorable films I've seen in many a year.
And let's not ignore the acting, of which you'll see examples of some of the finest performances in recent years - or ever. Kudos especially to Ed Harris and Colin Farrell.
I guess the only actor I wasn't totally thrilled with was Jim Sturgess - although, to be fair, he put in a good job. He just wasn't cast properly, for my money. I think his role demanded a more towering presence, one that projected more strength - and perhaps emotion - especially. But he was no slouch.
I was so impressed with this film that I felt I had to share it with my parents, so I bought I copy from Amazon for them to see. I have already emailed several friends, recommending it.
...Not quite Lawrence of Arabia, but it comes close, in my humble opinion. It's less lavish than Lawrence of Arabia and short on the big-budget glitz, but, then again, that's not needed or even appropriate to this story.
What a GREAT film!!!
24 people found this helpful
See all reviews
Back to top
Get to Know Us
Make Money with Us
Amazon Payment Products
Let Us Help You
EnglishChoose a language for shopping. United StatesChoose a country/region for shopping.
© 1996-2021, Amazon.com, Inc. or its affiliates