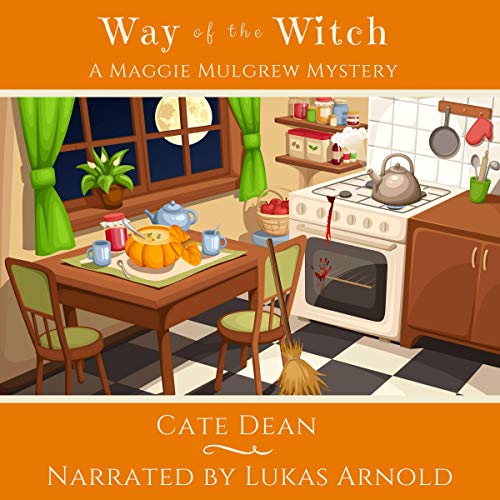 Cate Dean (Author, Publisher), Lukas Arnold (Narrator)
4.6 out of 5 stars 96 ratings
See all formats and editions
Sorry, there was a problem loading this page. Try again.

Welcome back to Holmestead - where an old legend, the death of a local, and a friend in trouble disrupt this picture postcard village.

Maggie's life is changing, and she can barely keep up. After inheriting Cragmoor Manor, she's determined to see it restored to its former glory. Martin has a surprise for her, one that will involve her in the restoration, so much more than she expected.

To create more chaos, her best friend, Spencer Knight, is working on a new exhibit at the museum. One of the new residents is furious about the exhibit - and she lets Spencer know in an angry and violent way.

When she's found dead in Spencer's kitchen, he becomes the prime suspect. Now, Maggie has to find the real killer, and fast, or she might just lose her best friend.

CharliAnn Olney
5.0 out of 5 stars A review for The Maggie Mulgrew Mysteries Books 1-5
Reviewed in the United States on January 14, 2018
Verified Purchase
I have done something with these books that I VERY rarely do. I have stayed up reading them. I have no qualms about doing that as I am a retired widow. But still, I don't stay up late reading! These books are so well written you just can't help it. The location setting is vivid, the main characters are FULLY fleshed out, and even the supporting characters have life to them! They are not just "stick figures" for the main characters to play off against.
While each book can be read on it's own, I would recommend reading from book one. Learning how Maggie and Spencer became such good friends, even though she lived in the US and he in England. How Martin came into her life, but was a murder suspect. And that is just book one! The others build on that beginning, and add other wonderful characters to liven the Villagers lives! I thoroughly enjoyed these delightfully cozy mysteries, and heartily hope Ms. Dean writes many more Maggie Mulgrew Mysteries. After all, we still need to further explore Blakeney Hall and Anna's Manor!
Read more
2 people found this helpful
Helpful
Report abuse

Joan Koko
5.0 out of 5 stars Romance and mystery
Reviewed in the United States on June 28, 2019
Verified Purchase
Spencer is dating Grace Nightingale who is a tour guide, but wants more from Spencer and he cannot commit, so Grace is planning on moving back to London. Spencer is working at the museum putting an exhibit together about the witch of Dell who was condemned. Martin is doing a documentary on the restoration of Cragmoor Manor, and Maggie is changing the name back to Blakeney Manor the original name, telling the story of Anthea and Jeremy. Many twists and turns, I get involved with the mystery and the love story of Martin and Maggie.
Read more
One person found this helpful
Helpful
Report abuse

Joanna McKenna
5.0 out of 5 stars This series is a great way to spend a weekend!
Reviewed in the United States on May 20, 2019
Verified Purchase
A haunted antique shop in a quaint seaside village in Kent, add its feisty blue-eyed redheaded owner and the drop-dead gorgeous archeologist who falls in love with her and she with him, her devoted childhood best friend Spencer, and a High Street tea shop and a dusty bookshop. Why wouldn't a lover of English cozies want to spend a weekend with this charming and clever bunch of accidental crime solvers? (Fans of Anthea take heart. She does *not* disappear forever as Book 4 would have you believe.) Enjoy!
Read more
Helpful
Report abuse

Gabbee
4.0 out of 5 stars Fun characters but too mushy.
Reviewed in the United States on September 4, 2020
Verified Purchase
This is the fifth in the series and the fifth that I have read. The story is fun and characters are enjoyable except for the constant kissing, hugging and protestations of love. I generally skip those parts. Enough already. A little more complexity in the plots would add some interest as well.
Read more
Helpful
Report abuse

Kindle Customer
5.0 out of 5 stars Fun and Entertaining
Reviewed in the United States on April 23, 2018
Verified Purchase
I like mysteries with a splash of paranormal and this one hit the mark. I ended up buying every book of the series and am waiting for another one to come out. Absolutely lived it.
Read more
Helpful
Report abuse

Kindle Customer
5.0 out of 5 stars Sweet Maggie Mulgrew
Reviewed in the United States on May 31, 2019
Verified Purchase
Just finished the series. When I finished book one I had to read the next four. Delightful characters, except for a few bad ones, with fast moving story lines. The residents of the village come together in ways that made me wish I lived there too. Love a good mystery without the gore, and a love story without explicit details. Like watching an old movie.
Read more
Helpful
Report abuse

Amazon Customer
4.0 out of 5 stars Enjoyed all 5 books
Reviewed in the United States on May 23, 2019
Verified Purchase
I enjoyed all five of the Maggie Mulgrew mysteries. They were light, quick reads, but I would have liked longer stories. While I liked the characters, I had difficulty visualizing each of them. The village sounded quaint, but again, had difficulty vizualizing. I would love to read more about Maggie, Martin and Spencer.
Read more
Helpful
Report abuse

Kindle Customer
4.0 out of 5 stars This one is really good
Reviewed in the United States on May 4, 2020
Verified Purchase
Even if you do guess the murderer, it so much fun getting there. Maggie is as plucky as ever. Character development is good and the villain gets their comeuppance. This is a good series.
Read more
Helpful
Report abuse
See all reviews

susansocks
2.0 out of 5 stars No longer enjoying this
Reviewed in Australia on November 20, 2019
Verified Purchase
I enjoyed the first 2 in this series but really can’t be bothered anymore. The main character is always in tears and an inordinate amount of time is spent with the couple declaring their love. Why did he not stay with her while she gave birth? It is not set in the 1950s. Btw no British baker makes blueberry scones. Sultana, cheese, plain with jam and cream but not blueberry.
Read more
Report abuse

Lesley McGovern
5.0 out of 5 stars Love this author!
Reviewed in Australia on July 14, 2019
Verified Purchase
Have enjoyed this series and was sorry to see it end. I loved the characters and plot lines. This series is well worth a read.
Read more
Report abuse
See all reviews