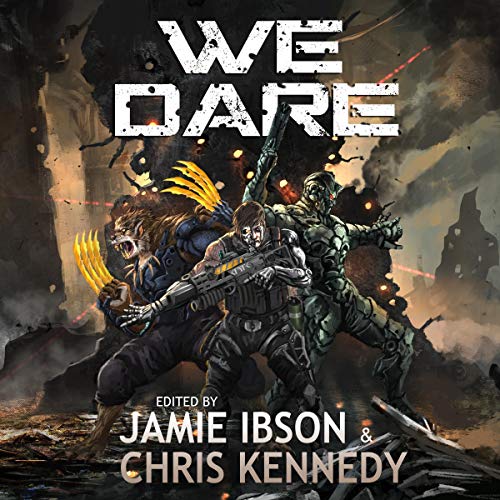 We Dare: An Anthology of Augmented Humanity

4.6 out of 5 stars
4.6 out of 5
62 global ratings
How are ratings calculated?
To calculate the overall star rating and percentage breakdown by star, we don’t use a simple average. Instead, our system considers things like how recent a review is and if the reviewer bought the item on Amazon. It also analyzes reviews to verify trustworthiness.

Dan the Gun Toting Book Junkie
5.0 out of 5 stars Reviewing anthologies is hard
Reviewed in the United States on July 6, 2019
Verified Purchase
There is always going to be one or more that stand out, and considering two, and in some cases three or four, of the authors in this anthology are convention drinking buddies of mine, it is difficult to be impartial.

One, Philip "Doc" Wohlrab's entry is just good and creepy, even if it fuels every conspiracy theory you ever had about senior elements of the US government having sold out to evil, eldritch things from dead stars. Spoiler alert- this time they actually did.

Two, Jack Clemons, Bun Bun, the hulking, bearded manchild known all through fandom both for being 6'7 and 350ish and for being a ton of fun at parties, shocked the hell out of all of us by turning in a serious piece of literature in his first sale. If you liked nice old school Shadowrun-era cyberpunk stuff, you will love this. Somehow he wrote a good early 1990s before-it-started-to-suck Shadowrun story in the Atlanta metro area, yet without stepping on a single actual copyright of FASA's. It's an awesome read with a cliffhanger ending that Bun Bun assured us is being expanded into a full novel.

KC Ezell, Chris Smith, and others from our usual social circle of unindicted co-conspirators did their thing as well. Some of the stories occur in larger universes and may read a bit better with prior backstory, but there wasn't a dud in the bunch. Highly recommended.
Read more
3 people found this helpful
Helpful
Report abuse

G. Jacobs
5.0 out of 5 stars Yvonne's two cents
Reviewed in the United States on June 3, 2019
Verified Purchase
What a ride! Thank you Jamie Ibson for putting together a really great anthology. To notch authors, with good stories to tell, come together in one book makes for some keep-you-up-late reading.
Read more
6 people found this helpful
Helpful
Report abuse

Charles Stewart
5.0 out of 5 stars Great read!!
Reviewed in the United States on July 11, 2021
Verified Purchase
I’ve always been fascinated with any storyline associated with nanotechnology and augmentations. This book did not disappoint. I just wish that this niche was more active. Great job with the stories. I was kinda mad when I finished the last story. I wanted more.
Read more
Helpful
Report abuse

Crawtrapman
5.0 out of 5 stars Great set of short stories
Reviewed in the United States on January 29, 2021
Verified Purchase
You will want to read more from most of these authors if not all. I highly recommend it. A really good anthology
Read more
Helpful
Report abuse

My life is richer for having read it. Scale of one to seven this is a solid nine, and now don’t mind me I’m off to chop off my arm to make room for the cybernetic enhancement.
Read more

My life is richer for having read it. Scale of one to seven this is a solid nine, and now don’t mind me I’m off to chop off my arm to make room for the cybernetic enhancement.

Sharon C.
5.0 out of 5 stars Fascinating collection!
Reviewed in the United States on August 15, 2019
Verified Purchase
Anthologies of this genre aren’t my typical read, but I found a lot to like in this. “Bag Man” promised an intriguing fast-paced story in a fully developed world. It delivered on all counts and scored bonus points for a completely unexpected ending. I bought a second copy as a gift for my Dad. Two thumb’s up and all of the stars from me.
Read more
One person found this helpful
Helpful
Report abuse

Amazon Customer
5.0 out of 5 stars Incredible!
Reviewed in the United States on July 20, 2019
Verified Purchase
I am blown away by the work of these authors. This is an excellent collection of writing. Definitely worth the read.
#deadtreedruid
Read more
Helpful
Report abuse

Dekoh
4.0 out of 5 stars Body Depot, anyone?
Reviewed in the United States on June 11, 2019
Verified Purchase
Interesting stories in how you can use tech to physically improve yourself and some surprising consequences if you do. Check it out!
Read more
One person found this helpful
Helpful
Report abuse
See all reviews
Back to top
Get to Know Us
Make Money with Us
Amazon Payment Products
Let Us Help You
EnglishChoose a language for shopping. United StatesChoose a country/region for shopping.
© 1996-2021, Amazon.com, Inc. or its affiliates