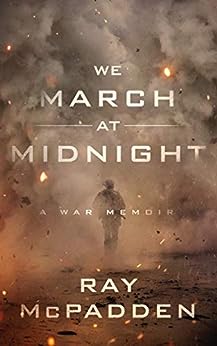 We March at Midnight: A War Memoir Kindle Edition

Enjoy a great reading experience when you buy the Kindle edition of this book. Learn more about Great on Kindle, available in select categories.
*Longlisted for the Reading the West Book Award in Memoir/Biography

*Nominated for the Voice Arts Award for Best Biography Voiceover

What would the war do without me?

We March at Midnight is award-winning author Ray McPadden’s chronicle of his experience as a highly decorated Ranger Officer leading some of the most dangerous missions during the height of the Iraq and Afghan wars. In 2005, Ray joined the army in search of what he calls “the moment”—a chance to prove to himself and his brothers in arms that he is a true leader. His job is to establish the first outpost in the Korengal, Afghanistan’s deadliest valley, and his decisions and mistakes will have a permanent impact on the men he commands. During the fifteen-month tour, his unit receives numerous decorations for valor while suffering nearly 50 percent casualties, ultimately accomplishing their mission in a land considered unwinnable.

Prowess with a rifle platoon soon earns Ray a position in the world’s premiere raiding force, the 75th Ranger Regiment, an accomplishment earned by less than 1 percent of the officers in the US Army, and during the most combat-heavy period of the twenty-first century. Ray spearheads the first joint-strike force of Army Rangers and Navy SEALs, in a shadow war against the agents of a foreign government, where lightning raids by helicopter, armored vehicle, and foot are his nightly routine.

In 2009, when Ray returns to the same corner of Afghanistan where his military career began, he suddenly finds himself tasked with leading Rangers against a target he knows all too well: the home of friends from his first tour. As he leads one last raid, Ray is at war with himself. Conquering this unexpected enemy proves the greatest challenge of all.

We March at Midnight is a blood-spattered tour de force of growing up, leadership, the nature of war, and its aftermath.

''Where most Afghanistan and Iraq memoirists chronicle either the grueling daytime slog of counterinsurgent infantrymen or the nighttime first-person-shooter war of counterterrorist commandos, Ray McPadden writes compellingly and candidly of his experience as a young battlefield leader in the thick of both. Covering the exhaustion of a marathon sixteen-month deployment to Afghanistan's rugged east, the thrills of shorter, sprint-like tours with the night-raiding 75th Ranger Regiment, and the guilt and weirdness of life in between, We March at Midnight offers an invaluable account of such key events at the height of America's post-9/11 misadventures as the 10th Mountain Division's plunge into the infamous Korengal valley and the Rangers' secret hunt for Iranian-backed bombmakers during the Iraq surge.'' --Wesley Morgan, author of The Hardest Place: The American Military Adrift in Afghanistan's Pech Valley

''We March at Midnight is the finest, fiercest account from our recent wars. Bone-clean writing, the author's ability to capture men or mountains in a phrase, and his rare gift for rendering combat's confusion clearly serve a uniquely frank account of post-modern (and eternally primitive) war at the torn-flesh level. Far from the crybaby military memoirs ever in vogue, this book presents the fear and the losses but also the exhilaration of the days that count as wins -- with the enemy lying dead and comrades unscathed. Above all, this is an honest book from a soldier who has chosen to hide nothing. At his best, McPadden is Hemingway without the bullsh*t.'' --Ralph Peters, author of Beyond Terror and Cain at Gettysburg

''Ray McPadden can write. His first novel was named best military novel in 2019. Now he follows it with a combat memoir, We March at Midnight, that should be required reading for every deploying platoon leader. McFadden's writing is sparse, punchy, and aggressive. He nails the essence of American infantrymen. They are not seeking to understand what brought them to Afghanistan's endless valleys and Iraq's endless deserts. They are seeking the enemy. McFadden is unapologetic and unromantic in his depiction of modern combat. The result is a fast-paced account of combat from the point of view of both traditional Army infantry and special operations forces that captures the essence of the few young men that volunteer to fight for us, over and over.'' --Owen West, former assistant secretary of defense, special operations

RAY McPADDEN is a four-tour combat veteran who served as a ground force commander in the elite 2nd Ranger Battalion during the Iraq and Afghan wars. He was awarded a Purple Heart, two Bronze Stars, and a medal for valor. A former Pat Tillman Military Scholar, he is the author of the acclaimed novel 'And the Whole Mountain Burned', winner of the W. Y. Boyd Literary Award for excellence in military fiction in 2019. He lives in Livingston, Montana, with his wife and children. --This text refers to the hardcover edition.

DANA ISAACSON
5.0 out of 5 stars Brutal, terrifying, touching
Reviewed in the United States on September 13, 2021
Verified Purchase
Ray McPadden is an amazing writer, and he takes readers places they would never otherwise go. We experience the highs and lows of a soldier's life, the comraderie, pain, hope, and tragedy. We also glimpse the amorphous, tortuous netherworld between duty and life back home.

Kindle Customer
5.0 out of 5 stars outstanding.
Reviewed in the United States on May 25, 2022
Verified Purchase
I love this book. Ray McPadden gives the reader a an understanding of the weight of being an infantry officer, the 100mph pace of a Ranger, and the ambivalence of conducting missions you don’t believe in, while feeling the joy of being accompanied by the best troops in the world.
Read more
Helpful
Report abuse

Mark Auman
4.0 out of 5 stars Addictive read
Reviewed in the United States on March 18, 2022
Verified Purchase
What compelled you to the rush back to a book about the war time experience of a soldier? In this case it is the humanity of the warrior who faced a demented and and barbaric enemy and learned how to win. We who read this man's story can vicariously learn what worked for him. You will like this book, trust me on that.
Read more
One person found this helpful
Helpful
Report abuse

Richard Powell
5.0 out of 5 stars Absolutely amazing!
Reviewed in the United States on August 26, 2021
Verified Purchase
A journey of a young leader through the hardest of hardships. Boys, brothers/sisters, Soldiers doing things no one should do in places no one should be. Thank you Ray, making them live forever in memories written amazingly.
Read more
3 people found this helpful
Helpful
Report abuse

Rick
5.0 out of 5 stars Excellent Read
Reviewed in the United States on March 13, 2022
Verified Purchase
This author can write. A terrific memoir and a book you will finish quickly. I look forward to reading his novel which I am purchasing now.
Read more
One person found this helpful
Helpful
Report abuse
See all reviews