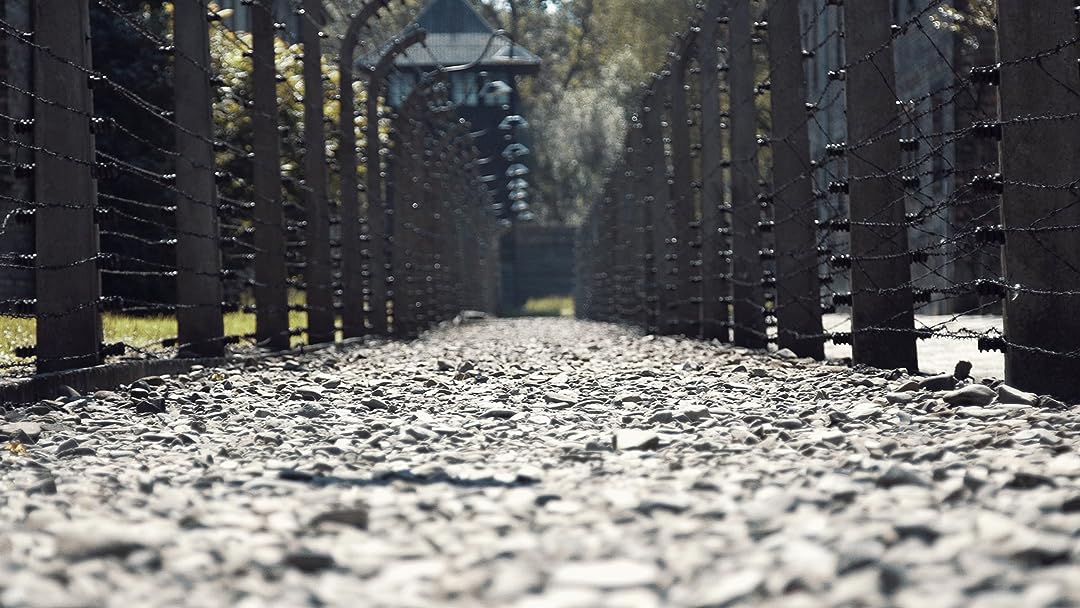 We Shall Not Die Now

(100)
7.91 h 40 min201913+
We Shall Not Die Now chronicles the Holocaust, when, between 1939 and 1945, six million Jews and millions of others were systematically murdered by the Nazi regime. Seventy-five years after the conclusion of the war, the film explores not only the horrific human tragedy and what we can learn from it - but also the resilience of those that rebuilt their lives in spite of the unimaginable.

Holocaust EducatorReviewed in the United States on December 16, 2019
5.0 out of 5 stars
A remarkably well-defined and succinct overview of the Holocaust with moving interviews!
Verified purchase
This is long, but I hope you read all of my thoughts about this remarkable film by Ashton Gleckman.

I was asked to be in the first group of test screeners for this film. I had never met Ashton, but we were connected by a fellow teacher friend. I am a retired elementary music teacher, who now serves as a Holocaust educator for libraries and schools in Indiana. My talks are based on my three trips to Auschwitz, Treblink, Warsaw, Majdanek, Israel and Romania, with my friend and Auschwitz and Dr. Mengele twin-experimentation survivor, the late Eva Mozes Kor, of Terre Haute, Indiana.

In my talks, I speak about the staggering and evil numbers associated with the Holocaust, but who can comprehend six million of anything, much less human lives? More and more, I am adding personal stories and photos of individuals in my talks to connect better with my audiences.

That is what I love about this film Ashton has created from the depths of his heart. He introduces the "basics" of the Holocaust with historical references and period film clips, but the focus of the film are the stories of simply remarkable people who have their own important, personal and unique "angle" of the Shoah. And these interviews WILL stay with you.

I hand out list of recommended books and films to my audiences, who often knew very very little about the Holocaust when they attend my talk. I now will highly recommend this as an excellent film, especially for people who need a basic intro about the Holocaust, and because the interviews will touch the heart of just about everyone.

I will tell you that I did not really care for Ashton's film when I served as one of the very first test screeners. It was too long and it felt like so many other Holocaust films I had seen (and I have seen just about all of them). At the conclusion of the screening - I told Ashton he had really thrown in the whole "Holocaust kitchen sink" and that I wanted to hear more of the stories and interviews. He seemed to take the criticism of the five of us to heart that day. I missed the 2nd test screening, so I was wondering how it turned out.

I have to tell you that I could not believe how much Ashton changed the film. It was a totally different film. Totally.
He focused and tightened the editing, but absolutely - most importantly - turned the film into a remarkable piece of cinema. And absolute tour de force of Holocaust retelling and informing. And Ashton wrote much of the music which is touching and beautiful. I am so proud of Ashton.

Please tell others about this film. It is important and needs to be seen.

CariReviewed in the United States on December 29, 2019
1.0 out of 5 stars
This is not new material.
Verified purchase
This movie seems to be a collection of interviews and information taken from Claude Lanzmann's Shoah which was made in 1985 and is 550 minutes long. Having watched that entire film, I am not seeing anything new in this one. It should also be mentioned that no where in this film is credit given to Mr. Lanzmann who spent a decade of his life collecting this material.
19 people found this helpful

Barbara MReviewed in the United States on February 19, 2020
5.0 out of 5 stars
Awesome Documentary
Verified purchase
A very good history lesson, but even more importantly, a lesson in what is currently happening in not only the United States, but abroad as well. The current administration is using Hitler's tactics to not only foster prejudice, hatred, anti-semitism, and turn American citizens against each other, but also to promote an anti-immigrant policy that will be our undoing. Get off your asses and educate yourselves! Find out what the laws are for immigrants, what they are entitled to, and how long it takes for them to be eligible for social programs for yourselves. I guarantee you are in for a shock! Most importantly, never forget and never allow it to happen again!
4 people found this helpful

Cameron M.Reviewed in the United States on January 6, 2020
5.0 out of 5 stars
Stunning and timely piece of work.
Verified purchase
What Ashton has done with this film is something that I have not seen before. The heartbreaking stories that were told were delivered to the audience in a way that both informed us and reminded us of the progress we have yet to make. I found myself emotionally exhausted at the conclusion of the film, but I never felt bored or like information was copied and pasted. This film is incredibly timely, and it was masterfully done.

As for the score, Mr. Gleckman, Mr. Frankenberger, and Mr. Wallfisch delivered a stellar piece of work. The theme, written by Benjamin Wallfisch, evoked feelings of pain and trauma. The rest of the film was underscored beautifully, while adding emotion and really making the audience feel every story that was told. The entire post-production team, from the composers to the colorists did an outstanding job!

Overall, this film is a must-watch!
17 people found this helpful

Denise H.Reviewed in the United States on February 27, 2020
5.0 out of 5 stars
Amazing Documentary Told by Survivors
Verified purchase
Amazing! Oscar-worthy documentary. This was done entirely by one twenty-something. Huge kudos for creating this masterpiece.
Hearing survivors recall their experiences in the Death Camps was heartbreaking. When you read about the Holocaust in school, it doesn’t give you the full horror of what actually happened. I never knew that this campaign of genocide literally killed nearly *all* Jewish children in Europe at the time. I think the total child-survivors was 1%...can you even wrap your mind around that? Nearly every single Jewish child in Europe was killed. It’s horrific beyond imagining. The most helpless being murdered...I have no words.
Hearing survivors recall their experiences was heartbreaking. One lady wrote a letter to her mother(who was killed) and she said that she remembered smiling and being happy, and after they took her mother away, she never felt those things again. Her pain was palpable as she spoke her truth to the camera.
One gentleman was dressed with various Native American jewelry as he spoke about his life, and when the camera cut away to his son, the son said gently, that his father had taken an interest in Native culture (since losing his entire family) because of the Native peoples’ experience with genocide. It was like a shared loss across cultures...heartbreaking.
Listening to survivors, I couldn’t help but feel we as people need to remember every story, every name, every death, so that this does not happen again. There are elements even now trying to ‘sanitize’ what occurred and not call them ‘Death Camps’ as that isn’t ‘politically correct’ according to Polish officials. But that’s what they were...Death camps. Places of inhuman torture, abuse and mass murder. And I for one will not forget.
One person found this helpful

JOLReviewed in the United States on January 22, 2020
5.0 out of 5 stars
Never forget this nor shall we ever forgive
Verified purchase
My great grandparents left Wegrow, Poland in 1908 for Canada. Two of their adult children stayed in Poland and were sent years later to the death camps where they died. The 6 children and my great grandparents lived in Alberta, Canada. Their last name was a jewish name but somehow, we never learned if they were Jewish. I feel everyone should see this moving documentary. It is an act that should never be forgiven or forgotten. I understand that in the early 40s all the Jewish people were killed in Wegrow, Poland.
3 people found this helpful

DANNIReviewed in the United States on February 23, 2020
5.0 out of 5 stars
This breaks my very soul
Verified purchase
I sobbed watching this documentary. I was born in 1955, and was NEVER taught about the holocaust in school. I remember someone talking about it when I was approximately 25 years old and thought they were lying. I truly believed that nothing so horrible could ever happen. Then I did some research and learned about such ugliness, such horror, and the evil of mankind. I talked to my mother about it, why it was never talked about it in our home? I was so angry with my mother for years. I guess because she lived during that time and kept silent? Did it mean nothing to her? Was she so indifferent to such horrors? Or, maybe, back then, housewives weren't informed of such matters. She answered she "didn't know why". That was my answer. Something so important in the world, the worst of the worst...and she couldn't give me an answer. I also remember Snopes.com had a headline that stated "First Lady Melania Trump wears a jacket that says "I don't care, do you?", on her way to see the immigrant children caged on the Mexican border. I almost didn't click on the headline because it was so outrageous, I could NEVER believe it to be true of a First Lady. But, I clicked and checked...it made me sick to my stomach.
2 people found this helpful

Nina ConnoyReviewed in the United States on February 11, 2020
5.0 out of 5 stars
Heartbreaking
Verified purchase
I have many documentaries of the holocaust. This was gut reaching and powerful. Yes, we know the history and what happened. To see these survivors in this one was just so moving to me. I am not Jewish as you can see by my name. I did grow up in a Jewish neighborhood. I was born Catholic, but besides my religion. It is what man can do to brainwash most of his country to his psychotic ideology is no different than what is happening now with Trump. It is one race, one religion and what America was founded on doesn't matter to the GOP anymore. It is very sad that part of that history is repeating in 2020. Thankful we do not have those kinds of camps. But the camps that Latino's are dying in is appalling. These kinds of movies as well as black, asian and latin Americans should be taught in our schools. Having a forced fed BS version of American history has got to stop and tell the real history.
2 people found this helpful
See all reviews
Back to top
Get to Know Us
Make Money with Us
Amazon Payment Products
Let Us Help You
EnglishChoose a language for shopping. United StatesChoose a country/region for shopping.
© 1996-2022, Amazon.com, Inc. or its affiliates