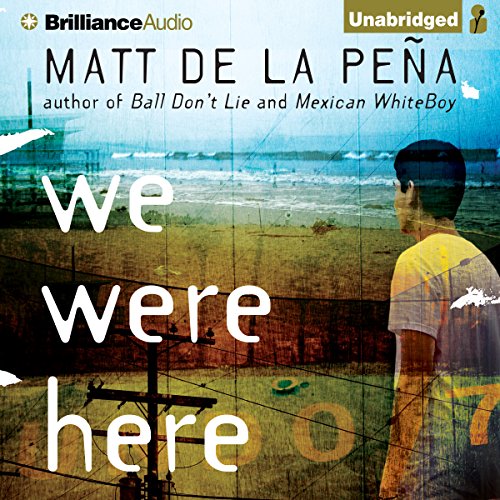 4.7 out of 5 stars
4.7 out of 5
185 global ratings
How are ratings calculated?
To calculate the overall star rating and percentage breakdown by star, we don’t use a simple average. Instead, our system considers things like how recent a review is and if the reviewer bought the item on Amazon. It also analyzes reviews to verify trustworthiness.
Top reviews

K Craig
5.0 out of 5 stars An Incredible Story - You will LOVE We Were Here
Reviewed in the United States on May 14, 2012
Verified Purchase
`People always think there's this huge hundred-foot-high barrier that separates doing good from doing bad. But there's not. There's nothing. There's not even a little anthill. You just take one baby step in any direction and you're already there. You've done something awful. And your life is changed forever.' ~ Matt de la Peña, We Were Here

At the onset of We Were Here, we get acquainted with Miguel, the narrator of the story as he is transferred from juvi to a halfway house. Miguel has a mindset that he has absolutely nothing to lose, and that he will never again have anything to gain. We are aware that he has done a bad thing--a terrible thing--but we are not quite sure what it is. We only know that he never wants to forget the burden of his guilt...that he wants to carry it with him forever and feel the extreme pain of his suffering.

This is the story of three troubled teens. Miguel, Rondell and Mong are a very unlikely trio. Miguel's first encounter with the other two boys are violent. There is spitting and punching and a painful pinning to the ground. All of these things make the reader think Rondell and Mong will both soon be left in the dust of the story. But they would be wrong. The three eventually devise a plan to escape the halfway house together and make a run for freedom in Mexico.

Once they are out in the wilds of California, and heading for the ocean so they can travel south to Mexico, the story really takes off! Along the way, the reader is treated to a wealth of self-reflection from Miguel's ongoing journal writing. We discover that he is a compassionate, thoughtful and intelligent young man. And we get to find out the back-stories of each of his traveling companions as Miguel sets off one night by himself to read the boys' files, which he stole while preparing to leave the halfway house behind him.

It is also Miguel who allows the reader to see the good in the other two boys. Rondell, we are quick to learn, is not a bad kid...but a simple one. He believes in Jesus Christ and puts all his faith into a bible he cannot read but carries around with him all the same. Mong, who appears to be a psychotic hopelessly lost soul, turns out to be an overwhelmingly sad case. Nobody should endure the heartache and soul-breaking that Mong has been through in his young life. When he declares Miguel his best friend, it will baffle both Miguel and the reader...but it is such a pivotal moment in the story. Heartrending.

I love when authors namedrop books. I always have. In We Were Here, Miguel has a penchant for reading. Throughout the course of the story, he spends time with Salinger's Catcher in the Rye and Steinbeck's Of Mice and Men. The reader cannot help but see Miguel as a modern day Holden, and Rondell as a modern day Lennie. At one point I found myself thinking, `Oh please, please, please...mention Camus's The Stranger. You have to!' And sure enough, the name was eventually dropped. Miguel's second travel companion, Mong, is without a doubt Camus's Meursault! This book is an homage to all three of these wonderful stories, but it is also SO much more than that. It is a story that, in itself, will definitely become a classic.

The potential reader of We Were Here will just have to take my word for it when I say this is one of the best books I have ever read. I don't want to give away too much of it here. I can only say that it unfolds with a beauty I have not seen in a while. The reader will grow so close to these three boys, they will want to protect them from both themselves and the world around them as they set out on the journey of their lives. The journey they take makes men of boys, and makes each of them realize the wealth they carry inside. Your heart will break and strengthen and break again as you take every step alongside Miguel and his broken friends. And when you hope beyond hope that they do the right thing, they might even hear you.

This was a beautiful story. Be prepared to feel all of the emotions you carry...and some you didn't know you had. I will be re-reading this every now and again...it's one of those books you want to hug close to you when you're finished.
Read more
6 people found this helpful
Helpful
Report abuse

B. J. Neary
5.0 out of 5 stars We Were Here by Matt De La Pena
Reviewed in the United States on February 4, 2014
Verified Purchase
A great pick for our Februrary book discussion this month with my librarian friends! I just loved Matt's other book, Mexican White Boy Mexican WhiteBoy and We Were Here is just as compelling. Miguel is in juvi for a crime he doesn't reveal but he is totally guilt ridden about. He gets into an argument with Mong, an Asian with a severely scarred face, many other problems and health issues---scary, scary kid. When Rondell arrives; Miguel already knows him there is more of a flow to his daily life. Miguel reads lots of books, records in his journal (judge's orders) hangs out with(and makes fun of)Rondell. It is when Mong breaks them out to escape to Mexico and get jobs, that life totally changes for the three escapees. Miguel acts hardcore but he is hiding a lot behind his Mexican bravado. As they travel (and hide) to Mexico, there will be life lessons Miguel (and Mong and Rondell) work through as they come to terms with themselves, family, and their place in the world. A riveting, adventure with Miguel and friends. Reluctant readers (and teens who enjoy urban fiction) will relate to all three characters and their dilemmas.
Read more
One person found this helpful
Helpful
Report abuse

S. Little
5.0 out of 5 stars Fabulous Read!
Reviewed in the United States on October 20, 2009
Verified Purchase
We Were Here is Matt de la Peña's latest book and it's a clear winner. The characters are great, funny and sad adventures, and a great storyline that keeps you hanging on until the end.

I don't want to give away most of the story; but, it's about Miguel, his developing friendship with two other boys from the group home and their adventures and mis-adventures, and his relationship with his brother and mother. There are some twists and turns that the reader does not see coming and the mystery of Miguel's past keeps the reader hooked to the end. The characters were so believable and he nailed their personalities perfectly. I laughed, I cried, and couldn't put the book down.

Very satisfying read and a great ending. This book for young adults would be great for all readers including relunctant readers.
Read more
4 people found this helpful
Helpful
Report abuse

Adoring Darcy
3.0 out of 5 stars Original perspective but a bit preachy
Reviewed in the United States on April 17, 2021
Verified Purchase
De la Peña is definitely a talented writer. The characters were interesting in their discovery of their personal identities and talents outside of the confines of social discourse. However, We Were Here sounded a bit preachy at times which made the book challenging to finish.
Read more
Helpful
Report abuse

Sheri Grimes
4.0 out of 5 stars Speaks authentically to the population it describes
Reviewed in the United States on May 3, 2010
Verified Purchase
I purchased this for a 16-year-old foster child I work with as a volunteer for CASA. She read it cover to cover in less than a week. She related to the young protagonist and his situation, and because she is from the Stockton, Calif., area, she recognized the places mentioned in the setting. I would recommend it for anyone who wants to understand young people who have been in this type of situation or to any young person like this young man who is looking for someone who understands.
Read more
3 people found this helpful
Helpful
Report abuse

William Barnes
5.0 out of 5 stars A YA Novel for Adults
Reviewed in the United States on May 9, 2017
Verified Purchase
This is a great YA novel which addresses some very adult themes. I think adults would also get something out of reading this book.
Read more
Helpful
Report abuse

TM
4.0 out of 5 stars Summer Reading Assignment
Reviewed in the United States on July 14, 2013
Verified Purchase
This was a summer reading assignment for upcoming 9th graders. This was a good book. It has some language and sexual content but no more than what kids would find on the internet. This was a page turner and kept me interested. My child quickly became engaged in the book and then I no longer had to mention to him that he needed to read. I would recommend the book and I think this was good story for boys who may not necessarily like to read to help them become interested in reading.
Read more
2 people found this helpful
Helpful
Report abuse
See all reviews

Madelin Lynch
5.0 out of 5 stars Five Stars
Reviewed in Canada on May 24, 2018
Verified Purchase
Great read! And I never finish books.
Read more
Report abuse
See all reviews
Back to top
Get to Know Us
Make Money with Us
Amazon Payment Products
Let Us Help You
EnglishChoose a language for shopping. United StatesChoose a country/region for shopping.
© 1996-2021, Amazon.com, Inc. or its affiliates