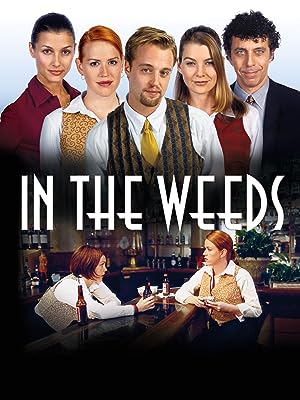 (11)
1 h 30 min2000PG-13
A stylish look at the highs and lows of one night at a cool New York City restaurant, simmering with comedy and passion.

SakaeReviewed in the United States on September 13, 2015
5.0 out of 5 stars
Good plot
Verified purchase
Movie in good condition. I love Molly she is sooo natural when acting. I saw part of this movie on TV and liked it. If you had or have the experience of working at a restaurant you will like this movie. Great actors.

Marc S. SmilenReviewed in the United States on December 13, 2012
2.0 out of 5 stars
cant send this movie back for a re-cook!
Verified purchase
Its a weak movie. Other reviewers liked it. But one reviewer who liked it does make a good statement, saying the movie "dinner rush" was a stronger movie. I agree: "dinner rush" was a stronger movie, so far as movies with restaurant themes go.

David F. FuchsReviewed in the United States on March 3, 2013
5.0 out of 5 stars
great liitle movie
Verified purchase
really enjoyed this film. Good cast... pretty true for kids trying to make it in NYC.
and a good lesson on why you should never piss-off the wait-staff

GmeridianReviewed in the United States on April 23, 2005
5.0 out of 5 stars
great way to spend an evening
Verified purchase
This is a rare treat. Smart, sophisticated, and fun, 'In the Weeds' is a great film for pretty much anyone. The snappy dialogue and interesting characters help create a brisk ride.

The only problem? No extras whatsoever. But the quality of the film makes sure that this is not monumental. Perhaps a special edition is in store.

Heat WaveReviewed in the United States on August 24, 2015
5.0 out of 5 stars
Five Stars
Verified purchase
Awesome thank you

Daniel JolleyReviewed in the United States on June 4, 2005
4.0 out of 5 stars
Real life as reflected through the camera's eye
Some may ask what's the point? I, on the other hand, love movies that just show you a moment in people's lives. It's real life but it's not real life. Things happen, but nothing really changes. Life makes for an awful playmate, but you just have to keep on keeping on. In the Weeds shows you one night in the life of a restaurant staff working at a swanky New York restaurant. For me, the big appeal was a cast including Joshua Leonard (of Blair Witch fame) and 80s icon Molly Ringwald. I didn't really know if the movie would be any good, but I have to say I was quite impressed by it (and the entire cast is excellent).

I think most of us know what it is like to work at an unfulfilling job and wonder if our dreams will ever come true; at some point, you have to face the fact that all of your big plans for the future may never happen - that's when you truly become an adult, and the way you deal with that realization determines what kind of an adult you are going to be. Will you keep fighting or just give up? Among the restaurant staff in this little passion play of a movie are an aspiring playwright, a couple of aspiring actors (one of whom went to Julliard), a cynical thirty-something, an angelic rookie/social worker - and of course a tramp, an illegal alien or two, and a sadistic cook (if Eminem were a cook, he would be this guy). The manager (Sam Harris) is a somewhat high-strung, quirky fellow who's really a good guy, but the owner (Eric Bogosian) is an uncaring monster - and he just so happens to be entertaining a client in the restaurant tonight. Adam (Joshua Leonard), our aspiring playwright and all-around good guy, has the "honor" of working that table, and it's an ordeal and a half. Other customers include a group of shallow rich guys who apparently use a testosterone cologne, a silent old couple who our angelic rookie tries to help communicate (needlessly), and a man planning to pop the question to his girlfriend. The act of putting a ring inside a dessert may be romantic, but it does lend itself to some logistical problems. Here, such problems bring a night of tension to an ugly head.

When things really start spiraling out of control, thanks largely to the hateful owner, everyone deals with the different little crises the only way he/she knows how - the new girl Martha (Ellen Pompeo) radiates goodness and understanding, the arrogant actor/waiter continues to play his part, Chloe (Molly Ringwald) maintains her cynical demeanor, the cook makes awful threats against anyone and everyone, and Adam just tries to deal with everything in his obsessive little way (and takes numerous cigarette breaks). Eventually, the night comes to an end, as does the movie. As crazy as the whole night was, it was basically just another night. Life goes on; there's no fairy tale ending, and none of these characters has really been changed at all by the night's events. All that you are left with is an understanding of the bond that unites all of these very different people.

Although it is just now being released on DVD in 2005, In the Weeds actually dates back to 2000. A film like this won't pack people into theatres, but it's a really good film. It doesn't impart any answers to life's big questions, but there really aren't any answers in real life, either. It's cliché in many ways, but so is life. Some critics said they failed to connect with any of these characters, but my experience was quite the opposite. In the Weeds just takes us through one night in the lives of this one group of people, and it makes for an interesting character study, if nothing else. Personally, I really enjoyed this movie.

LGwriterReviewed in the United States on December 8, 2008
3.0 out of 5 stars
Surprisingly good indie
The rating should really be 3 1/2 stars; this is a solid piece of work with a lot of smart dialog. It makes a fitting companion movie to the stronger Dinner Rush which I highly recommend, but it's still a good movie on its own. In fact, there's even a carryover cast member, Kirk Acevedo who, in Dinner Rush, plays a passionate, gambling-driven sous-chef. Here in In the Weeds, he's the chef, but a nasty kinda guy. Well known faces in the cast include Eric Bogosian, the snooty restaurant owner Simon; Molly Ringwald as one of the waitresses, and a surprise visit from Peter Riegert as a patron with a well-endowed wife.

In the Weeds does not have the same juicy punch as Dinner Rush, but it is entertaining nevertheless; it's fun to listen to the waiters all bring out their concerns, kvetches, and hopes, and also fun to watch Eric Bogosian put folks in their place. The writer/director, Michael Rauch, has a good ear for dialogue which makes this a movie definitely worth watching.

Recommended
One person found this helpful

By CJs PirateReviewed in the United States on December 26, 2014
3.0 out of 5 stars
A Slice of Restaurant Life Served in 90 Minutes
In the Weeds is certainly lesser known than the nearly identical, but funnier, Waiting. Granted, Waiting is really a rip off of In the Weeds, but how many Hollyweird movies are really originals in the first place?

In the Weeds takes a single slice of time in the restaurant world's life: an evening meal. In this line up we have the newbie, the career server, a movie star in waiting, the screenwriter hoping to be recognized, the promiscuous girl, an illegal alien or two busboy/back server/food runner, the scan artist, the spineless manager, the ruthless chef and overworked pastry chef and ass of an owner. Funny, I've seen a good many restaurants like this. The storyline was pretty weak, all in all, but it was worth a one time watch - especially if you work in a restaurant. Guaranteed, you'll identify and recognize a character or two or perhaps a customer or two.

In the Weeds is hard to pidgeon-hole to genre. It really isn't funny enough to be a comedy not dry enough to be drama. It just is.
2 people found this helpful
See all reviews
Back to top
Get to Know Us
Make Money with Us
Amazon Payment Products
Let Us Help You
EnglishChoose a language for shopping. United StatesChoose a country/region for shopping.
© 1996-2022, Amazon.com, Inc. or its affiliates