Weighing the Soul: Scientific Discovery from the Brilliant to the Bizarre Kindle Edition 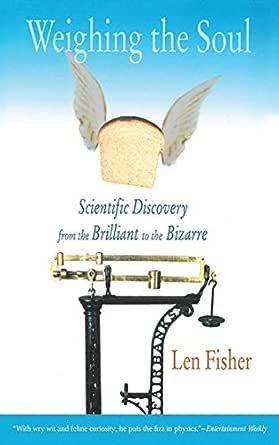 Flip to back Flip to front
Audible Sample Playing... Paused   You are listening to a sample of the Audible narration for this Kindle book.
Learn more

"Science and common sense often don’t mix," notes Fisher, a research fellow at the University of Bristol famous for studying the science of dunking doughnuts. This new effort is largely about discoveries, such as the wave theory of light and the theory of relativity, that defy reason yet are the bedrock for scientific understanding of the world. To make his various points, Fisher portrays an eclectic mix of scientists and the ridicule heaped on them for their apparently nutty ideas; he also includes genuine quacks and charlatans, like "Doctor James Graham," whose 18th-century specialty was enhancing his customers’ sex lives with electrical devices. Fisher entertains in an airy, lighthearted manner, while also imparting his own philosophy of science, eloquently discussing the borderlines between science and philosophy and faith; in his view, science can’t know everything, and those things that it can’t know "are the province of philosophy and religion." He also tackles the question of whether science can keep us safe. For instance, can it answer questions about the long-term effect of exposure to microwaves? Fisher’s answer is guarded: taking risks is necessary for progress; science’s job is to provide accurate information with which to weigh both the risk of trying something new and the risk of not trying it. Illus. Agent, Barbara Levy.
Copyright © Reed Business Information, a division of Reed Elsevier Inc. All rights reserved. --This text refers to an alternate kindle_edition edition.

Len Fisher is an honorary research fellow in the Department of Physics, University of Bristol, England. The author of more than eighty scientific papers, Fisher has made more than 200 radio and television appearances worldwide.  --This text refers to an alternate kindle_edition edition.

Fisher's approach is fresh, his explanations are clear, and he incorporates many of his own experiences. -- Science News

Marvelous . . . An ebullient look at how the strangest . . . experiments sometimes led to the most brilliant science. . . . A fascinating guided tour. -- Boston Globe --This text refers to an alternate kindle_edition edition.

4.2 out of 5 stars
4.2 out of 5
6 global ratings
How are ratings calculated?
To calculate the overall star rating and percentage breakdown by star, we don’t use a simple average. Instead, our system considers things like how recent a review is and if the reviewer bought the item on Amazon. It also analyzes reviews to verify trustworthiness.
Top reviews

Masayoshi Ishida
4.0 out of 5 stars Commercially a good title of the book but talked about it least!
Reviewed in the United States on August 22, 2006
Verified Purchase
From an educational point of view the book may be rated at 4 stars, but if you expect much on the "Weighing the Soul" subject, you might be disappointed; about 10% of the whole 248 pages are allocated to weighing the soul. But the author informed us that there has been no published experimental study of "Weighing the Human Soul," since that by Duncan MacDougall, M.D., conducted almost a century ago. Considering another story of old experiment (in 1799) on measuring "the weight of heat," the author suggested a possible cause of the weight loss recorded by MacDougall during life-to-death transition of human due to an effect of probable convection air flow generated "when the bodies that they were studying cooled down upon death," and the author suggested that "In any event, convection currents must be eliminated before any future experiment similar to MacDougall's could possibly be interpreted as weighing the soul." A reasonable suggestion from the 1999 IgNobel Prize scientist, though conduction of any future study on weighing the soul will be very difficult in these days when every patient is equipped with resuscitator during the life-to-death transition. As a retiree from the research field of nuclear engineering, I am not much convinced by the author's reasoning for the interpretation of the MacDougall's results.

Believers in "the 21g" as the weight of soul might be disappointed after reading the first chapter of this book. But we know that our scientists are not at all versatile when the subject is concerned with "human consciousness." There are many historical facts that verify the ignorance of science as written, for example, in the books "D.D. Home--His Life and Mission (1888)" by Mrs. D.D. Home, and "Healing Hands (1966)" by J.B. Hutton. So, I would like borrow this space to encourage those believers informing another theory dictated by a non-human intelligence. My interest in this subject originated from a suggestion by "Seth" in books by the late American author Jane Roberts (1929-1984), i.e., from the following paragraph of Seth's dictation in Session 197 (in 1965) in the book "The Early Sessions Book 4": "The electromagnetic reality within the human organism has considerable mass, but the entire physical weight amounts to 3 to 6 ounces at the very most. Again, the mass is composed of electrical intensities. I have told you that all experience is basically psychological, and that it is held in coded form within the cells. One electrical pulsation can represent an emotional experience. The importance of the experience to the individual will be responsible for the intensity with which it is recorded." Note that Seth is not directly referring to the weight of soul, but to psychological state of living human. I have no idea how to mathematically formulate the Seth's suggestion to come up with the 3 to 6 ounces of mass.
Read more
9 people found this helpful
Helpful
Report abuse

This book is very entertaining, written by a British academic physicist, Len Fisher, who believes that one of the duties of scientists is to popularise science through their writing. Len is, in fact the winner of the 1999 `Ig Nobel' prize for his research on `dunking doughnuts'.

The title of the book comes from the first chapter which is entitled `Weighing the soul' and refers back in time to the Egyptian painting of the God, Anubis, weighing the soul of a person who had died recently using scales counterbalanced by a feather. I was rather taken with this idea and on a recent trip to Egypt purchased a copy of the painting. On further reading about the concept that was being portrayed, it appears that the feather was not actually a feather, but represented Ma'at, the correct conduct in life. If the balance was in equilibrium, then the soul passed the test and the deceased had lived a good life.

This is unlike the further Western experiments described by MacDougall which seek determine if there is a physical change in weight when someone dies. A loss of weight on death would indicate that the soul exists. On the other hand, does not Fisher take The MacDougall experiments at face value, but uses MacDougall's own self-doubts and other experimental results to consider the whole question of `scientific method'. Between times Fisher manages to bring Rumford's historic experiments on the nature of heat and the yet to be proven existence of the Higg's boson, into the discussion.

Yes, Len Fisher certainly writes entertainingly about science. Other chapters are entitled Making a move, A salute to Newton, The course of lightning through a corset, Fool's gold, Frankenstein lives, what is life and Conclusion: necessary mysteries.

As a chemist too, I liked the story of Fisher as a student preparing manganic acid in the back of the classroom, while the chemistry teacher `droned' on: as Fisher says, the explosion which could easily have occurred might well have destroyed the entire classroom.

There are also an additional sixty pages of notes an a index. The book is good value and makes an excellent read.