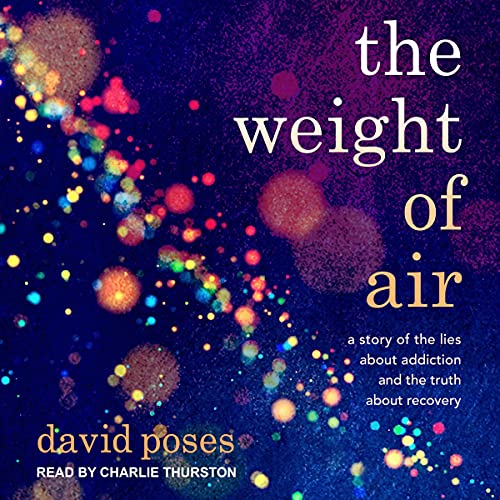 The Weight of Air: A Story of the Lies About Addiction and the Truth About Recovery

While his wife and two-year-old daughter watched TV in the living room, David Poses was in the kitchen, measuring the distance from his index finger to his armpit. He needed to be sure he could pull the trigger with a shotgun barrel in his mouth. Twenty-six inches. Thirty-two years old. More than a decade in a double life fueled by depression and heroin.

In his groundbreaking memoir, The Weight of Air, David chronicles his struggle to overcome mental illness and addiction. By age 19, he'd been through medical detox, inpatient rehab, 12-step programs, and a halfway house. He saw his drug use as a symptom of depression, but the experts insisted that addiction was the problem. Over the next 13 years, he went from one relapse to the next, drowning in guilt, shame, and secrets, until he finally found an evidence-based treatment that not only saved his life, but helped him thrive.

With grit, humor, and brutal honesty, David's story exposes the danger in traditional recovery models: They actually increase stigma and the risk of overdose, relapse, and death. As depression and addiction rates skyrocket and overdose fatalities surge, The Weight of Air is a scathing indictment of our failed response to the opioid crisis-and proof that success is possible.

4.5 out of 5 stars
4.5 out of 5
546 global ratings
How are ratings calculated?
To calculate the overall star rating and percentage breakdown by star, we don’t use a simple average. Instead, our system considers things like how recent a review is and if the reviewer bought the item on Amazon. It also analyzes reviews to verify trustworthiness.

The Bubblegum Review
3.0 out of 5 stars The Problem of only Feeling Alive When You're Dead on Drugs
Reviewed in the United States on July 17, 2021
Verified Purchase
I can appreciate this book because it's not a William S. Burroughs' "Junky" or a Selby's "Requiem for a Dream": it's not page after page of depressing, unrelenting scores and looking for scores; but, instead, everything that happens in the middle also, for a functional addict.

It's impossible to rate someone's personal experience; so I'll say that "the lies about addiction" and "the truth about recovery" are pretty tall orders to fill also in their subjectivity, and struck me as click-bait-ish for a subtitle. Who is to say what is a lie and truth about recovery? As a God-centered person myself, I very much agree with the author that God is not a "one size fits all" for everyone (with drug addiction), but even less is science, which, basically, just describes what God has created i.e. science is limited to describing what already is or has occurred. The irony of fleeing from a drug treatment program not because you don't want help, but because the program is run by religious zealots who also have a false understanding of God is, to me, just as bad as suggesting life-long drug use to curb the side-effects of life-long drug use. In the end, really, man doesn't know. Some people are changed by God, some people succumb; some people are changed by other methods such as methadone. *P.S. I find it very odd, though commonplace, that the treatment counselors (in the book) who make "God" as a foundation for recovery refer to drug addiction as a "disease" rather than Satan. In either case, and because I do believe in God, the treatment base is pretty spot-on, because in God, never mind addiction, you are helpless. But when you pretend that you're not and have a choice, you suffer even more.

The real lie is people's unwillingness to forgive their parents, particularly their mothers, as it forces them to admit that their parents were wrong: the unfortunate thing is that the author, like many, had no problem admitting his father's wrongs and his anger toward him, but nothing about his mother, who *repeatedly cropped up, in my opinion, as a problem, contributing to this fairy tale lie of "everything being OK", playing favorites with her children, and, really, putting the hell of her relationship with her ex-husband on her children, even more so on the author's younger brother who was closer to his father. In effect, turning her children away from their father. Evil. The author talks about this very dysfunctional relationship between his parents and, thusly, being placed on heavy anti-depressant medication as early as 16. And so begins a life-long avoidance of pain, and an inability to really face the reality of God and overcome evil feelings re-created in us by parents and guardians in the home.

Like I said, I appreciate the perspective of this book, but it's a bit disingenuous to overlook all of the aforementioned to suggest a science-based model that just requires more drugs. Once the author was able to really tell the truth (to his family and friends)--at the end of the book, that's when the recovery began. The only way out is through, not away.

I give The Weight of Air 3 1/2 bubblegums.
Read more
24 people found this helpful
Helpful
Report abuse

missmickee-bookreview
4.0 out of 5 stars The Silence, Stigma and Shame of Addiction: A Writers Journey To Wellness and Advocacy....
Reviewed in the United States on July 8, 2021
Verified Purchase
The opioid epidemic that began to exercise its fierce grip in American culture began in the 1990’s and is showing no signs of slowing down or easing up: “the weight of air: a story of the lies about addiction and the truth about recovery” (2021) is candid and courageously written memoir by David Poses. His battle with Substance Use Disorder (SUD) began in 1995, recovery is a process that lasts a lifetime, there is no cure.

When David was admitted to one of the top renowned rehab programs in the United States, he had been hospitalized for his addiction to Heroin. His father, who he barely had a relationship with, intervened in his care, it was evident he should have kept his (usual) distance. Poses explained to his counselors in rehab the level of “pain” (depression) had led to and resulted in his addiction. Poses quickly realized that the popular 12 Step Program used by the majority of American rehab programs at the time, would not really work for him. Poses illustrated the negative side of the rehab and insurance industry, and the failure of the (one size fits all) 12 Step Programs.

Two decades would pass of relapse, lost relationships and the inability to relate honestly to those who loved and cared about him most. The lies and deceit, rare well-paying jobs lost--where he could have used his talents and gifts to excel. Poses takes readers on his difficult and harrowing journey towards living his life without using drugs. The silence, stigma, and shame of addiction ceased when he began to honestly share his truth with others. This is an important book. Poses writing has been featured in several notable publications, including the Washington Post, Los Angeles Times and the NY Daily News. He lives in Hudson Valley, N.Y. with his wife and two children.
Read more
26 people found this helpful
Helpful
Report abuse

chris boutte
5.0 out of 5 stars Super relatable
Reviewed in the United States on July 7, 2021
Verified Purchase
The opioid epidemic has been going on for over 20 years, and it nearly killed me until I was able to get clean back in 2012. Since then, it’s killed countless others, but there’s still not nearly enough awareness and a massive stigma around addiction. Fortunately, people like David Poses took the time to share his personal story of addiction and recovery in this book, and it was extremely relatable. The book recounts David’s struggles with depression, addiction, and suicidal ideation, and I can’t recommend this book enough to loved ones who know someone struggling with an addiction. This book is extremely important because David is extremely raw and honest about his experience, and it’ll help people better understand what addicts like us go through and how difficult it can be to get clean, even though we want to.

David is an awesome writer, and he’s also an activist who spreads awareness about harm reduction. Although this was a fantastic book, I really enjoyed the epilogue where David talks about his experience with how buprenorphine saved his life. If he ever gets a chance, I think he’d write an incredible book about harm reduction and how we can tackle the addiction crisis in the United States as well as in other parts of the world.
Read more
27 people found this helpful
Helpful
Report abuse

Neil Rifenbark
5.0 out of 5 stars Accurate portrayal of addiction
Reviewed in the United States on July 9, 2021
Verified Purchase
I'm an opiate addict, and this is the most accurate portrayal of rehab and active addiction that I've come across. Thoughtful and entertaining to read, this book gave me hope. I highly recommend.
Read more
27 people found this helpful
Helpful
Report abuse
See all reviews

Chelsey Protulipac
5.0 out of 5 stars Honest and raw memoir with a light at the end of the tunnel
Reviewed in Canada on September 9, 2021
Verified Purchase
This is an incredibly important perspective on the physical and emotional toll of an opioid addiction. In the midst of a crisis that has no sign of slowing down, this book describes why abstinence based approaches will fail and result in countless and unnecessary accidental overdoses. Long term recovery from opioid addiction requires all of us to dig deep and take steps towards reducing the shame and stigma of wanting to get better, which can only be achieved by understanding what opiates do to the brain and body. David’s (sometimes painfully) honest and vulnerable memoir gives an important perspective that is imperative to creating a society that helps sufferers rather than leaving them to die. His writing is compelling and entertaining and drew me in from cover to cover. It is raw, funny and heartbreaking. Most importantly, it has been a significant step in helping me grieve the loss of a loved one to his relapse.
Read more
2 people found this helpful
Report abuse

Tracey Letts
5.0 out of 5 stars Raw, Real and Heartfelt
Reviewed in Canada on July 7, 2021
Verified Purchase
I’m not a fan of biographies but David tells his story with humour, passion and a realness that I found riveting. Definitely will recommend to those who are wanting to educate themselves and are looking effectively change drug policy.
Read more
3 people found this helpful
Report abuse

Amazon Customer
5.0 out of 5 stars Offered this mother a breath...
Reviewed in Canada on October 11, 2021
Verified Purchase
A breath to a greater understanding of the journey someone may take to find not only to recovery but a path that can lead to their ability in living life.
Read more
Report abuse
See all reviews
Back to top
Get to Know Us
Make Money with Us
Amazon Payment Products
Let Us Help You
EnglishChoose a language for shopping. United StatesChoose a country/region for shopping.
© 1996-2022, Amazon.com, Inc. or its affiliates