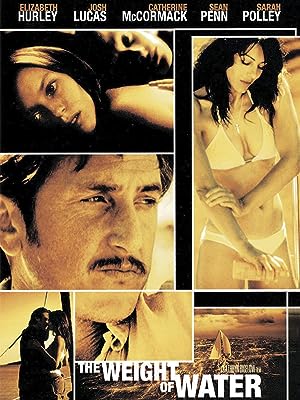 The Weight of Water

(231)
5.81 h 54 min2001X-RayR
A century-old double murder haunts Jean (Catherine McCormack), a photographer who travels to Smuttyhouse Island, the scene of the crime, to investigate.

Kindle CustomerReviewed in the United States on January 23, 2017
4.0 out of 5 stars
Madam Bovary Meets Lizzie Borden
Verified purchase
What happens when you give a woman who is profoundly unhappy and forever-stuck-in-her-soulsucking-life an axe, then threaten to destroy what little happiness she's been granted? Lies, mayhem, psychopathy, inappropriate fixations/attractions, and many innocent people paying the price with their lives.

There are many times you will watch a movie that has so many of flaws, inconsistencies and unnecessary melodrama that you mark it as a fail and hope to never be forced to watch it again. Then every once in a while, you watch a movie with all those negative characteristics but you still love it. That's The Weight of Water to me.

Perhaps "love" is too strong a word. There's something about it that calls to you, that compels you to watch it again. Everyone in this movie is a sensational actor/actress, so no one need be worried about bad acting spoiling your viewing experience.But there are basic inconsistencies which seem lazily overlooked. The inconsistencies seemed to be about time and budget constraints since they could easily have been rectified many issues by doing a reshoot or re-reading the script. It's a pet peeve of mine, and yet, I've not only watched it a dozen times, I went ahead and bought it so I could have it to own.

This could have been an excellent movie and a portrayal of facts that would have gotten all viewers engaged. Yet it fell well short when it should not have. I feel the same with Match Point, but in that case, I recognize my main problem with that movie is that Rhys Meyers is a terrible actor. Every sentence he utters sounds like a high school kid reciting dialogue in a badly directed play. Match Point had a great premise, unexpected resolutions and the understanding that in real life, bad people are not always held accountable for bad actions. All things that should have left us with a great viewing experience. But it fell flat because of the main characters poor acting abilities. Not so with TWoW. Great acting, great premise, great build up, but an oddly arced storyline with a shot of forced angst. Even so, even with these faults, I still love this movie. I don't really recommend it, because it's unlikely that most people will feel as attached to it as I was. But I still love it.

RonReviewed in the United States on August 25, 2013
3.0 out of 5 stars
"Gone Fishing"
Verified purchase
I found the story of the 1873 murders facinating and thought this movie would have focused on this story and in part it does, but for some strange reason they tried to equate the two stories. This from my perspective was the downfall to this movie that had plenty to work with the history combined with the research being done by Jean (Catherine McCormack). Jean (the photo journalist) with the help of her husdand Thomas (the writer) (Sean Penn) who enlists his brother Rich (Josh Lucas) who's sailboat boat they use for their seaside base camp for Jean's research into the 1873 murders. The three are joined by Rich's girlfriend Adaline (the hot antagonist distraction) (Elizabeth Hurley) who seems to either of had an affair or wants to have one with Thomas and the two are the antagonists for the present day story. As you can imagine there is plenty of tension between the two couples (in the cramped quarters of the sailboat) while Jean is doing her research and again it serves as more of a distraction to this story than a correlation between the people involved then and now. There are a few scenes throughout and near the end that can be considered a link to the killers actions/emotions in 1873 and Jean's actions/emotions. I really liked what was presented as the possible motive for the murders of the two women in 1873 that was so taboo back then as well as it is today. It negates the current story of the two couples like in a Massive Tsunami Wave kinda way. The acting was good as was the story of the murders, but the story of the two couples could of or should of been a story on its own. The sailboat and the two couples that bring extra (emotional) baggage onboard combined with bad weather equals a movie, but not in this one? The director and the writer were maybe a little to ambitious for this project and it became the weak link in this otherwise good movie. Was this worth the time? Yes. Would I watch it again? Maybe.

Story = The story of the murders is very good, but the present day story is distracting.
Acting = 4+
Direction = 3 Did not make the case for the present day story.
Thrill/Creepy Factor = 2.4
Sex/Nudity = Yes, but not graphic/ A few topless and underwear scenes. What some will consider lesbian overtones in a couple of scenes and two or three incest (fully covered) scenes.
Violence = Yes, but in only a few scenes and not graphic.
Foul Language = Yes, but used vary sparingly.
Entertainment Value = 3 Again the murder story was very good with its content for the time period.
2 people found this helpful

HistoryNutReviewed in the United States on February 19, 2016
3.0 out of 5 stars
Need A Better Remake On This
Verified purchase
I really wanted to give this a higher rating because the subject matter intrigued me from a historical perspective but the film had a number of flaws. But first, a highlight was the well done re-enactment of the 'incident' on Smuttynose Island and the ensuing mystery that continues to this day. The producers and director attempt to provide one possible explanation which is as viable as any. Now the contemporary people following one woman doing research on all this sort of float around directionless without any real cohesive connection to the topic with lots of unspoken flirting and lame attempts at character building. In fact by the end of the film I didn't particularly care what happen to these contemporary people. And while I don't have a vendetta against smoking, two of the principle characters seem to be non-stop chain-smoking to the extent it became rather annoying. I think this film is worth a look, especially for the re-enactments and the intriguing obscure subject matter which I liked a lot but the director could have done much better.

TwoCentsTomlinsonReviewed in the United States on February 10, 2014
2.0 out of 5 stars
I enjoyed the book but not the movie
Verified purchase
One of the characters has inside information she doesn't share with the others in her company, they eventually find out and this causes problems. I like Sean Penn as an actor but not in this role -- his performance struck a false chord. And, in my opinion, the same is true of Elizabeth Hurley -- she just didn't fit well w/the character she played. Wish I had better things to say but I just didn't think this movie was very good.

YukioReviewed in the United States on November 2, 2017
1.0 out of 5 stars
Did We Used to Be Japanese?
Verified purchase
Another chick-flick. I managed to stick with it for more than halfway through, but finally just couldn't take the sensitive women on one side versus the dense, brains-in-their-parnts men on the other. High production values (representative of money poured into the production by partisan interests.) You might be seduced into watching, and thus into being conditioned - Which is the whole idea, after all. Just get yourself ready - It's all about women's narrative, women's feelings, women's point of view. That isn't necessarily an evil thing in itself, but the dearth of contrasting, intelligent and wise men's narratives in modern film is the problem. In "The Weight of Water" the men are sort of like dogs, the women a bit like saints. Duh. Pass on this movie if you know what I'm talking about; watch it with your eyes open if you don't yet understand. Then, go searching for a man's movie to watch - Something made in the recent half century that's authentically representative of men and not rotting with stereotypes, CGI, combat, violence, car chases, guns, detectives, magical reality cum magical thinking, monsters, zombies. Maybe I'm obligated to suggest some examples in my experience. Treasure of the Sierra Madre, Woman in the Dunes, My Life as a Dog, Mon Oncle, The Purple Plain, The Samurai Trilogy (1950s ver. w/ Toshiro Mifune), Wong Kar-Wai's films (like 2046, Days of Being Wild, Ashes of Time.) Bunny Drops, The Samurai I Loved, Love and Honor, Twilight Samurai, The Hidden Blade. ... Hmmm - Seems like most of what comes to mind are not American films. Beat Takeshi's films too (Hana-Bi is good). Obviously you have to read subtitles and be OK with Black &White most of the time.
One person found this helpful

BevReviewed in the United States on September 26, 2018
1.0 out of 5 stars
Don't bother.
Verified purchase
Worst movie I have ever watched and I love Sean Penn.. and also as old as this movie is I can't believe I had to pay for it. Thanks Amazon.
2 people found this helpful

MrMustangManReviewed in the United States on October 6, 2020
1.0 out of 5 stars
sean penn couldn't save this garbage....
Verified purchase
too many flash backs.... poor acting.... boring story.... don't know how this got 5 star reviews.....

Danny DonianReviewed in the United States on February 1, 2019
2.0 out of 5 stars
Stupid film
Verified purchase
Only thing this movie has going for it is ELIZABETH HURLEY's boobies,weak plot,flashbacks non conected make fora hodge podge of silly stories! Of all the movies with Sean Penn this has to be his worst ever.
See all reviews
Back to top
Get to Know Us
Make Money with Us
Amazon Payment Products
Let Us Help You
EnglishChoose a language for shopping. United StatesChoose a country/region for shopping.
© 1996-2022, Amazon.com, Inc. or its affiliates