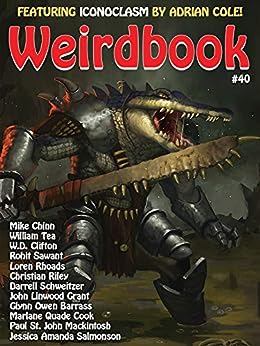 3.6 out of 5 stars
3.6 out of 5
6 global ratings
How are ratings calculated?
To calculate the overall star rating and percentage breakdown by star, we don’t use a simple average. Instead, our system considers things like how recent a review is and if the reviewer bought the item on Amazon. It also analyzes reviews to verify trustworthiness.
Top reviews

K. G. Anderson
4.0 out of 5 stars Stories to make you shiver
Reviewed in the United States on May 23, 2019
Verified Purchase
This issue of Weirdbook is a bit uneven, but there are several stories you won't want to miss. They include Adrian Cole's "Iconoclasm," a complex and textured tale about a priest's loss of faith in modern times. "Iconoclasm" ends in a graveyard battle, as does Loren Rhoads' chilling "Elle a Vu un Loup," in which a hunter attempts to rid a haunted island of a supernatural wolf. Another atmospheric story that grabbed my attention was “The Thirteenth Step” by William Tea. He shows a real gift for storytelling in this modern tale of a world traveller returning after his father’s death to the house where his deeply disturbed mother lives as a recluse.
Read more
One person found this helpful
Helpful
Report abuse

Kenneth Miranda
1.0 out of 5 stars Stick to Howard, Lovecraft, Smith, and Quinn.
Reviewed in the United States on November 9, 2018
Verified Purchase
My God, this has got to be the worst collection of weird tales I have ever read. All of the stories within this anthology as sub-par at best and unreadable at worst. I actually feel embarrassed for the editor who decided to put this trash out. The weird tale is a form of art that, when written correctly, is supposed to give us chills. All of the stories in this magazine elicited from me snores instead of screams. To potential buyers I say this: beware this magazine. Subscribe instead to Asimov's Science Fiction or the Magazine of Science Fiction and Fantasy instead. The Weirdbook, unfortunately, just isn't weird enough.
Read more
One person found this helpful
Helpful
Report abuse

J.N.Cameron
5.0 out of 5 stars A must read for fans of all genres!
Reviewed in the United States on October 21, 2018
Verified Purchase
Each piece in this anthology is well-crafted and entertaining! I love this series of short stories and recommend it to everyone. Kudos to John Gregory Betancourt, W. Paul Ganley, and Douglass Draa for another great read!
Read more
7 people found this helpful
Helpful
Report abuse

signalsX1
4.0 out of 5 stars Another solid issue
Reviewed in the United States on September 16, 2019
Once again, Weirdbook provides a fine selection of weirdness from both established authors and newer voices in the field.
Read more
Helpful
Report abuse
See all reviews

Perceptive Reader
3.0 out of 5 stars Good Collection
Reviewed in India on May 24, 2020
Verified Purchase
The volume was, typically, full of readable stuff. A lot of them were 'meh' type. Some, like Adrian Cole's 'Iconoclasm', Samson Stormcrow Hayes' 'Early Snow', Paul Lubaczewski's 'Playing A Starring Role', Jack Lothian's 'The Santa Anna' and Paul R. McNamee's 'Pouring Whiskey In My Soul' were good. But I found the following works to be very good and befitting the high standards of this anthology:
1. David M. Hoenig's 'Nameless and Named';
2. Matt Sullivan's 'The Circle';
3. John Linwood Grant's 'Sanctuary';
4. W.D. Clifton's 'The Veiled Isle'.
If you get hold of this volume, do read it. It may not be unmissable. But it does contain several very good works.

Thomas Hill
5.0 out of 5 stars Great story by Matt Sullivan
Reviewed in Canada on January 21, 2020
Verified Purchase
Matt Sullivan is an expert in crafting a world where the unexpected juxtaposes the mundane. It's always a thrill to read his stories because you never know where they will go.

I can't wait for his next submission.
Read more
Report abuse
See all reviews