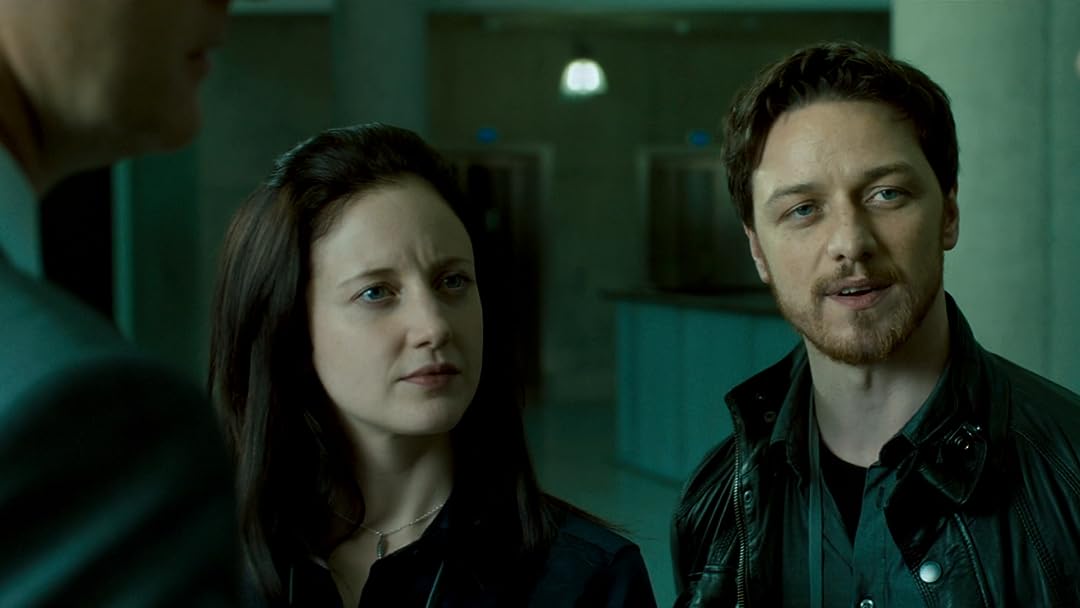 Welcome to the Punch

(367)
6.11 h 39 min201318+
James McAvoy stars in this action thriller as a detective with one last shot to take down a notorious criminal who has just been forced to return to London.

joel wingReviewed in the United States on May 1, 2021
3.0 out of 5 stars
Bad guy Mark Strong turns out to be the much more interesting character
Verified purchase
James McAvoy is a London detective who has been after legendary heist man Mark Strong for years. McAvoy finally thinks he has a chance to catch him when Strong’s son shows up. The story is very interesting because Strong isn’t really portrayed as a bad guy. Yes he committed a large robbery at the start, but after that he’s more concerned about getting his son back. He also isn’t a cold blooded killer as he had a chance to take out McAvoy but only shot him in the leg instead. Strong turns out to be the much more interesting character. Of course there’s action and gun play thrown in. There’s one very intense scene involving a mercenary and his grandmother that really stands out. Just as important the story ends up going in an interesting direction and not the one you expect from the start. It all makes for a very good crime drama.
2 people found this helpful

AlexReviewed in the United States on June 20, 2021
4.0 out of 5 stars
Great actors, good plot
Verified purchase
I’ll admit, it doesn’t take a miracle for me to enjoy anything from James McAvoy or Mark Strong so having both talents in one movie is a huge bonus. I really enjoyed this movie and thought the plot lines were well thought out. I was really drawn to Strongs character more than anyone and found him to be likable, almost. The only thing missing, in my opinion was Max’s breakdown of events to his superiors, from all the blood and death surrounding him that wasn’t actually by his hands…in a perfect world, I guess.
One person found this helpful

Amazon CustomerReviewed in the United States on March 12, 2021
3.0 out of 5 stars
anything over 3 stars is silly and wrong
Verified purchase
This movie is immediately bad. Obvious in first 5 minutes they sacrifice substance for style. Make sure we stop and line the motorcycles up in perfect line at 45 degrees during the high speed chase boys. This, while they are repeatedly doing wheelies for no reason and carrying huge dry bags with no waist straps. I didn't make it far enough to see if we find out what was in the dry bags, but if it was anything heavier than pillows it would have thrown them off the motorcycle when they repeatedly go down stairs and they sure as hell arent going to run and fight with them.
One person found this helpful

BalgarFungReviewed in the United States on August 17, 2021
4.0 out of 5 stars
Almost Too Complex For Its Own Good
Verified purchase
There are layers of this that are too complex to understand, but in the end, it all comes together. Parts of the movie seem to move too slow. In some ways after you know the full story and look back at what had transpired in the movie, it seems to feel like the story was thicker than it needed to be or too some degree, not plausible for the desired end result. Now that I have watched it to the end, I want to rewatch the movie to see if I catch any of clues that came together at the end.

HydraG2Reviewed in the United States on April 29, 2020
4.0 out of 5 stars
Fun if a little generic.
Verified purchase
Enjoyed it for the most part. James McAvoy and Mark Strong definitely carried this film despite the stories standard fair plot. Action scenes were well done and I guess the big twist at the end was pretty good, but I felt disappointed on the abrupt ending. There was no real resolution to the deeper plot really. But nonetheless its worth a watch.
One person found this helpful

LReviewed in the United States on October 2, 2014
4.0 out of 5 stars
"An enemy of my enemy is my friend..."
Verified purchase
Action-packed English crime-drama.

An up-and-coming London detective (Max Lewinsky) gets shot in the leg by a notorious criminal (Jacob Sternwood) during a bank heist. The injury he sustains makes him limp. He becomes obsessed with catching the guy who did this to him. Few years later, an opportunity arises when the criminal's son, who also happens to follow in his father's footsteps, gets caught. The detective uses the son as a bait to lure in the criminal father. What the detective does not know is that the son is involved in a wider criminal scheme that will involve corrupt police officers, politicians, prominent weapon manufacturer, and a group of mercenaries...

What I have noticed lately is that James McAvoy has become a sort of English version of Leonardo DiCaprio...they almost look identical and both have made similar type of movies...ranging from comedies, dramas all the way to action.

I said that before and I will say it again: England (Great Britain) produced and is still producing ----the best action-police-crime movies in Europe, and one of the best in the world---- !!!

Matt HawkinsReviewed in the United States on August 29, 2021
5.0 out of 5 stars
Exciting and thoughtful action film.
Verified purchase
The movie is about a British policeman who is wounded by a criminal during a robbery and the events which conspire to make them work together. It is a British film and it is intelligent and crisp. There is violence in the film and at times it is over the top and unrealistic but it is an action film. I won’t give anything away but the ending is exciting but totally unrealistic. Mark Strong’s performance is fantastic.

Steven Anthony FurioReviewed in the United States on July 29, 2021
5.0 out of 5 stars
Sleeper hit
Verified purchase
If you liked Wanted, or Kingsman, or any number of similar action stories, watch this.
Here Comes the Punch is one of those “did i see that preview?” you might've put on your list than never got around to.
One person found this helpful
See all reviews
Back to top
Get to Know Us
Make Money with Us
Amazon Payment Products
Let Us Help You
EnglishChoose a language for shopping. United StatesChoose a country/region for shopping.
© 1996-2021, Amazon.com, Inc. or its affiliates