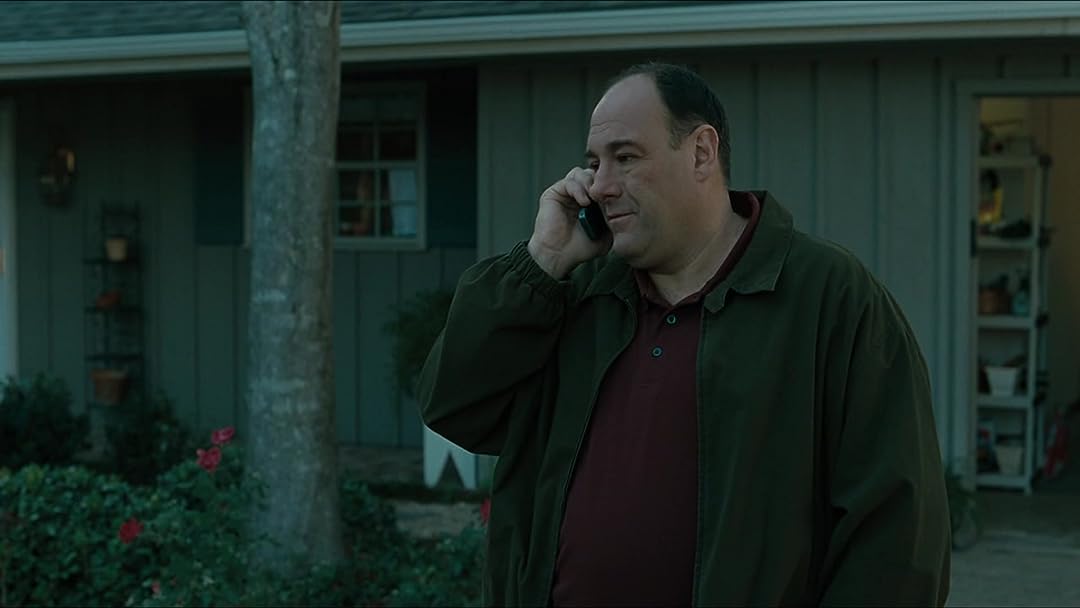 Welcome to the Rileys

James R. McgeeReviewed in the United States on May 27, 2019
5.0 out of 5 stars
Excellent low key performance from James Gandolfini
Verified purchase
Forget any bad reviews that says this is James Gandolfini's worst movie. They don't know what they are talking about. Granted its not the caliber of some of his other performances but this movies calls for him to be low key and he delivers beautifully. The story itself is raw in the sense it is not your feel good type of movie. It centers around the difficulties he and his wife are enduring and his attachment to a teenage stripper/prostitute he meets while in New Orleans. Although the relationship is strictly platonic the true nature isn't revealed until his wife decides to go to New Orleans to get him back into her life. This is a gutsy, intense movie with powerful performances all around. You really do want to see this movie.
21 people found this helpful

annie_rReviewed in the United States on May 25, 2019
5.0 out of 5 stars
This is a good movie
Verified purchase
This is a reaction to the negative review posted just this week. The person who said it was unmotivated and wooden acting must have been distracted on some way. They were watching the movie on the same day that I was. First of all, the Southern accent is well done and appropriate. The character Doug is comfortable as a southerner and would have no reason to move in elitist circles where an accent may present problems. And why do we assume that the owner of a plumbing supply house isn't a multimillionaire? He doesn't have a mansion, but that in itself suggests that he spends his money well. He has a very nice car. Rich people are not all Wall Street types.

And how could one not notice the fantastic rapport between the stripper and the plumbing guy? The fact that he is turned off by her commercial sexuality is completely understandable on this performance. The interaction between them is poignant and subtle.

I'm sorry that this reviewer missed the point of this movie but don't let this silly review keep you from watching this. The reviewer is wrong on every point. This is a movie about a man and his wife who love each other. They love other people too.

Michael A.Reviewed in the United States on June 17, 2019
3.0 out of 5 stars
Good Characters with a Slow and Unfinished Story
Verified purchase
I've seen negative reviews and glowing reviews on here. I've given this film and honest 3 stars. Although, it would be 2.5 out of 5 if possible.

The glass is half full: the characters are great and we discover more just as they do, as the story progresses. The actors do a great job of blending into their roles and bringing the characters to life. It was enjoyable to spend time, essentially, peering into the lives of these well acted characters.

The glass is half empty: This was a really wasted opportunity for story telling. It ends up being a very long character sketch. If I had somehow ended up in this movie in a theater, I probably would have walked out. The pacing is overly slow and this doesn't lend anything to the film. While I did stick through the whole thing to see how the ribbon flowed, I did find myself reaching for the fast forward through the unnecessary pauses. I also occasionally checked to see how much was left, wondering if their looked like enough run time remaining for the story to end up somewhere.

Sadly, it didn't. If this was an action or comedy movie, the credits would have rolled after, "Part 2, Coming Soon!". The ending was that empty and open. One thing I simply can't stand with films is a writer who doesn't have the decency to lend some closure to their work. It's as if the producer looked at the screenwriter, then at their watch, and then said, "Ok, screenwriter, it's long enough wrap it up." Or, that the writer just got lazy and decided to call it quits before finishing the story. This often happens with "character sketch" type films. The writer draws you in with characters that you enjoy getting to know, even if they aren't enjoyable people. Then BAM, "Part 2, Coming Soon!" (or not) and it's over.

If you enjoy discovering well acted characters, watching along just to see what turn they will take next, and can stand a needlessly slow pace with head-scratching pauses, and can handle an open ending, then this film might be an OK way to pass a couple hours.

NightShiftReviewed in the United States on May 23, 2019
1.0 out of 5 stars
Worst James Gandolfini Performance I've Seen
Verified purchase
I have immensely enjoyed the acting of the late, lamented, James Gandolfini, but not in this movie. His Southern accent is poor, unnecessary for his character (many, many lifelong Southerners do not affect drawls or twangs), and annoying. He plays a stupid 55-year-old, who dislikes and ignores his wife, but lavishes money and attention on a teenage stripper/whore, without his generosity being motivated by any good qualities of the girl. He is lonely, and feeling great loss, after the coronary death of a four-year girlfriend, which restimulates his grief over the loss of a teenage daughter some years earlier. I felt no chemistry between Doug and the young whore; they just seem like actors acting their parts, polar opposite of Gandolfini and Edie Falco in The Sopranos. "Doug" throws around money like a rich man, which he is not (plumbing supply), and plunges into a platonic relationship with the stripper for no reason I could discern. We must assume he sought replacement for the loss of the teenage daughter, but neither the script nor the acting demonstrated any such feeling. I couldn't watch much more than 20 minutes before exiting to try to find something else.
4 people found this helpful

Kira S.Reviewed in the United States on July 20, 2019
2.0 out of 5 stars
Good performances, story could be better
Verified purchase
First of all, what the heck does the title mean? Of all the titles they could have chosen for this movie, "Welcome to the Rileys" is one of the more ridiculous ones. But okay, I'll let that go. It is what it is. And the same is true of Kristen Stewart's character - she is what she is, although there is just a little bit of hope that her encounter with the Rileys - both of them - may have boosted her self-esteem enough that she will try to make something of her life in the future. Since the writers went overboard to give the Rileys a "happier ever after" ending, I am glad they did not do the same for Mallory/Allison. That would have been to much and, in fact, this one incident healing more than ten years' worth of marital conflict is a little facile. I say conflict; part of the problem was there wasn't any conflict, nor any communication, either. A marriage cannot survive without communication - take it from someone who's been married even longer than the Rileys.
2 people found this helpful

Luke Reviewed in the United States on June 26, 2019
1.0 out of 5 stars
terrible
Verified purchase
this movie is is done terribly. its set up to be this father who's daughter died and he ends up trying to replace her by taking care of this filthy young women who is a vulgar prostitute. Kristen Stewart who plays the the whore is really bad and tony's performance is even worse. whenever he tries to talk like a normal guy, and not use his natural gumba guido accent he comes across as speaking the way black comedians do when they are making fun of white people. its really contrived. the prostitute is the same, and Stewart just comes across as every other lower middle class adolescent girl she has ever played, only with more curses words. its like watching a school play. Then they try to make it seem so shocking that "she's just a child" doing these horrible things but the character is a 16 year old women, which I think is the age of consent in Louisiana or maybe 17. every european country has a an age of consent of 14-16 aside. it would,d b e shocking if she was 13 or 14 or something and maybe explained why she ended up that way, but it doesn't. It tries to be this character study but the dialogue is weak and there is very little of it.

dandilionReviewed in the United States on May 31, 2019
5.0 out of 5 stars
Welcome to the Rileys
Verified purchase
Welcome to the Riley's is an excellent film about dealing with what seems to be insurmountable grief. It also touches on the spectrum of loss from both a parent's eyes and a child's eyes. This film features a wonderful ensamble cast lead by James Gandolfini in a role far outside Tony Soprano. Excellent acting by Kristen Stewart and Melissa Leo. There are universal messages here that I think all people can relate to. Number one is that it's never to late to change the direction of your life if you really want to and number two is that where there is love, there is hope, but you first have to take the first step toward forgiving yourself.
4 people found this helpful

Ron BlachmanReviewed in the United States on June 4, 2020
4.0 out of 5 stars
Star-power used perfectly.
Verified purchase
There are some actors you can't take your eyes off when they are on-screen. Even in repose Gandolfini, Stewart and Leo capture my curiosity and empathy - what's going on inthere? What is he or she about to do? to say? To my mind this is the real essence of star-power. Kristen Stewart is particularly fascinating. If you see her interviewed or speaking extemporaneously she seems almost incoherent at times, struggling to keep something in or get at something she can't quite find I wonder if she's about to lose everything...the tension is palpable. But give her lines on a script and she is transported into edgy compelling characters. The story here is somewhere between Pygmalion and Taxi Driver, The performances are amazing.
One person found this helpful
See all reviews
Back to top
Get to Know Us
Make Money with Us
Amazon Payment Products
Let Us Help You
EnglishChoose a language for shopping. United StatesChoose a country/region for shopping.
© 1996-2022, Amazon.com, Inc. or its affiliates