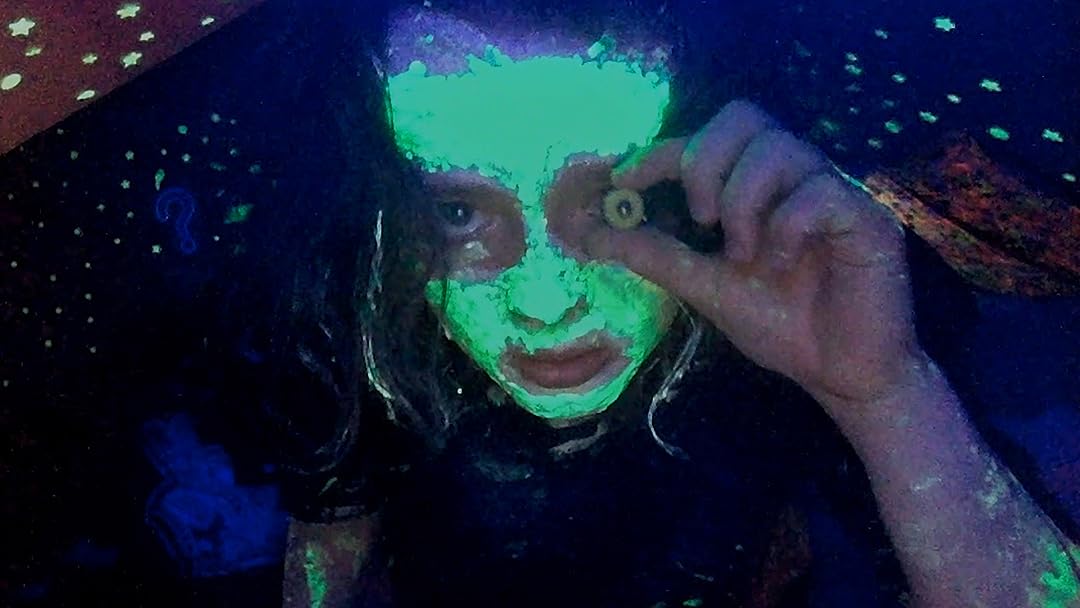 We're All Going to the World's Fair

(157)
5.31 h 25 min202216+
Alone in her attic bedroom, teenager Casey becomes immersed in an online role-playing horror game, wherein she begins to document the changes that may or may not be happening to her.

CharlesReviewed in the United States on May 1, 2022
1.0 out of 5 stars
What you need to know... this is NOT a horror movie, no joke!!!
Verified purchase
I've never even written a review on here, until this lie. I couldn't, in good conscience, let you make the same mistake I did, by maybe seeing a trailer, reading some reviews, and renting this thinking it's a horror movie. And I don't mean it's a bad horror movie, I mean IT IS NOT A HORROR MOVIE. Absolutely miscategorized! I can't believe they would let the creators just say it's horror and let us rent it. We've all been a victim of clickbait, but I didn't know they could do it fake labeling movies now. I am legitimately angry about this.
8 people found this helpful

IncreaseMatherReviewed in the United States on April 26, 2022
1.0 out of 5 stars
Angsty Teen Posts Cringe Video Compilation
Verified purchase
This is not a horror movie at all, nor does there seem to be any discernable plot. The "World's Fair" game is never explained or given any context, except that it's a social media challenge. What type? I don't know because no other information is given. The movie plays out as a series of videos posted by a young teen, and the videos are exactly like what a teenager trying to be "intense" would post. Interjected with the teens posts is some type of subplot with a grown man who watches the teens videos and sends her messages. Nothing else happens. Nothing else is explained. I would like my money back.
7 people found this helpful

stephReviewed in the United States on April 24, 2022
1.0 out of 5 stars
mistake
Verified purchase
accidentally hit bought when trying to back out so I decided to just watch it. my husband is a huge movie buff and I left the room to read because I didn't want to even hear it anymore. it's a show burn, lots of hesitation and to much forced acting. neither of us can get this time back
6 people found this helpful

MeredithReviewed in the United States on May 1, 2022
1.0 out of 5 stars
a modern classic (for the blind and deaf)
Verified purchase
wow that was bad. like so bad actually i’m mad that i’m down 6.99 and 86 minutes. why why why did this win awards im being so serious this was BAD. why did alex g do this i love alex g and this was horrid. alex g if you’re reading this i love you but wow… (1 star for alex g bc everyone is LYING saying it’s good)
5 people found this helpful

wow is tht a cowReviewed in the United States on April 24, 2022
5.0 out of 5 stars
incredible
Verified purchase
one of the best movies this year. elevates the standards for indie cinema by creating a polished feel to nightmares of our reality. Delusions of identity within the echo chamber of nightmares. This film reaches into the darkest corners of the modern experience - especially in a post-lockdown world where isolation had become a standard. i love it with all my heart. also, s/o Alex G. Amazing score.
4 people found this helpful

Rob HReviewed in the United States on May 22, 2022
4.0 out of 5 stars
Misleading Advertising for a Poignant Indie Drama
Verified purchase
I don't want to write any spoilers here—some other reviews will do that if you need more context for my review—but this film surprised and moved me. I went in expecting something mainstream horror, but after the very slow first act I realized I was wrong and I almost gave up watching. Not long after, things became clearer for me and a lot more compelling. It's an indie drama, a couple of steps away from arthouse cinema. Simply put, I imagine this film is the truest representation we're likely to have in a long time of the online generation, what a friend of mine calls Screenagers. Fantasy, and sometimes something very much like real life, is just a click away, and the documentation of both that so many regularly do today is a double-edged sword. Some people become more loved—cf. Influencers—and others become infinitely more lonely. Probably the lonely people outnumber the others by a considerable margin. I give it 4 stars because I think act 1 could have been improved, but maybe one day I'll come back to this film and realize it couldn't have gone any other way.

HelloPandaReviewed in the United States on May 9, 2022
5.0 out of 5 stars
One of the best movies I’ve seen in a long time
Verified purchase
This movie is excellent. From the soundtrack, to the atmosphere, the acting, the simplicity, the suspense, to the horror. It all adds up to a very valid critique of the nightmare that is growing up with social media, performance, and navigating a digital world as a vulnerable, impressionable, insecure young person. This film was gorgeous and terrifying. I can’t recommend it enough. Please watch this. ⭐️⭐️⭐️⭐️⭐️
2 people found this helpful

Jennifer WilliamsReviewed in the United States on July 20, 2022
5.0 out of 5 stars
A Cautionary Tale of Life on the Internet
Verified purchase
Describing this film as horror doesn't feel quite right. It's a film that lives inside the construct of horror, specifically that of internet creepypastas. Perhaps you have to be of a certain age to relate to this film. I see so much of my young self in the primary character of Casey. Her isolation, her questioning of self, her anger and frustrations, and ultimately her Alice in Wonderland fall down the rabbit hole of the internet and all the dangers that accompany the anonymity of such a vast landscape.

This isn't a film with jump scares or violence or gore. It's a film that picks at narratives and safety through the allure of clicks and views. It invites the viewer into the mind of a teenage girl as seen through her activity online, and provides a view into every dark thought one might have. It is thoughtfully slow and intentionally confined.

We're All Going to the World's Fair asks us to consider what happens to the people we meet online while also challenging our perceptions of self and others. It's a smart and affecting snapshot of adolescence in the vacuum of a society made large through a little black box. Watch it with the lights off and then sit with it a while, remembering what it was like in your bedroom alone at night while everyone else around you slept, fingers hovering above a keyboard...