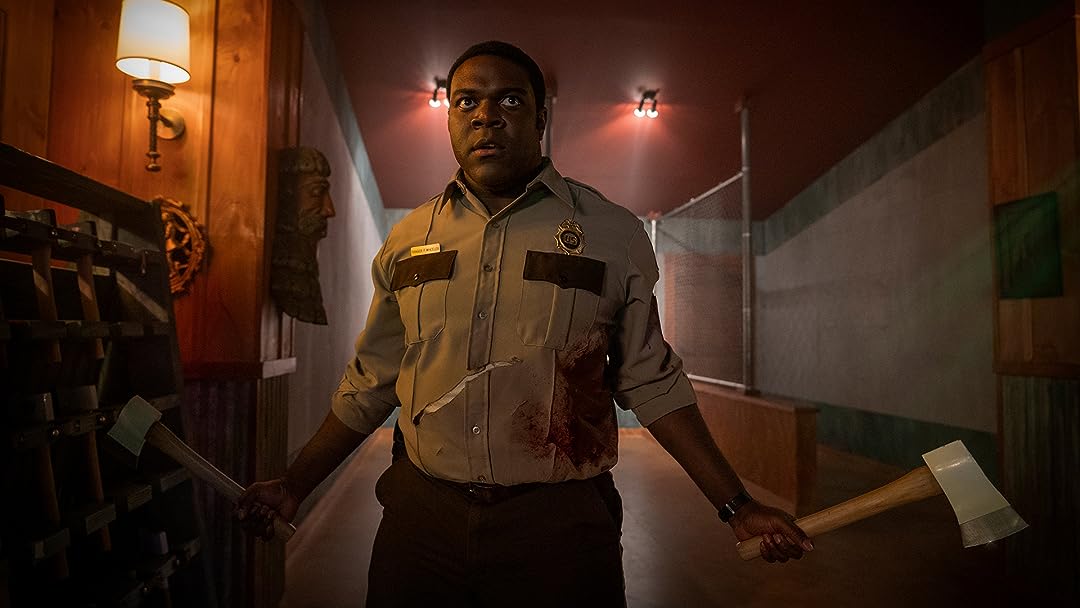 (9,369)
6.01 h 36 min2021X-RayR
When a killer terrorizes the snowed-in residents of a small town, it falls to the new forest ranger to find out who - or what - lurks among them in this hilarious horror whodunnit.

DavidReviewed in the United States on July 2, 2021
2.0 out of 5 stars
Meh…
Verified purchase
It tries SO hard to be witty but ends up failing at that. Way too much talking and talking over each other. Also, too much political crap in it. Was pretty bored in the end. I wouldn’t spend money on this if you’re considering renting it. I ended up just being frustrated with just about everything in this movie.
31 people found this helpful

Ann SunReviewed in the United States on July 2, 2021
4.0 out of 5 stars
Fun and charming Cabin-in-the-Woods story with well written lines delivered with comedic timing.
Verified purchase
Milana Vayntrub has great stage presence but Sam Richardson stole the show with his "nice guy" persona. Overall a delightfully funny slasher that doesn't take itself too seriously and spiced up with just the right amount of social commentary with characters that represent the gamut of American society. Definitely a movie worth watching at least once :-)
25 people found this helpful

IthacaRedReviewed in the United States on July 4, 2021
2.0 out of 5 stars
Disappointing Horror Comedy
Verified purchase
I love horror comedy but this was a big miss. It started off well and then repeatedly nosedived. The cast was obviously comprised of good actors but they were clearly directed to go too over the top cartoonish to the point where they became non-humans and the audience had no one to root for. It’s very clear that the direction is to blame. You can do quirk without going to such unwatchable extremes. There are flavors of Tremers, Clue, Pottersville, and many other beloved horror comedies. Character traits were hammered into the audience’s heads and there were far too many red herrings. The worst offense was the horrendous werewolf makeup and effects. Embarrassing for a trick or treat costume.
21 people found this helpful

Demoman37Reviewed in the United States on July 3, 2021
5.0 out of 5 stars
Well executed comedy/ horror with out the gore or a thousand jump scares.
Verified purchase
A little different take on you typical werewolf story,but a very good take. Very well written and excellent acting relying on the store and characters instead of over the top special effects and gore and the comic take is on point. Very well done and I'm sure me and my family will be watching this over and over. Especially around Halloween.
19 people found this helpful

RN514Reviewed in the United States on July 11, 2021
1.0 out of 5 stars
Not funny, not scary, just disappointing.
Verified purchase
Don’t waste your money! In their defense, the actors did their best with a crappy script and storyline, but sadly the overall outcome was just a bad movie. Didn’t help that it constantly poked the eye of political conservatism in the most unfunny of ways either, which I can find hilarious when done right. So, even the political jokes were a complete fail. Not scary, not funny, just a disappointing movie that I TRULY hoped would be good.
19 people found this helpful

jwwReviewed in the United States on July 14, 2021
4.0 out of 5 stars
Don't get a lot werewolf mysteries. Lots of fun
Verified purchase
In the horror comedy Werewolves Withing, loosely based on the video game of the same name, the residents of the small isolated town of Beaverfield find themselves cut off from the outside world and the possible prey of a werewolf.

I found this to be a rather fun, quirky, and clever film. There are a good few twists and turns in this. I kind of like the idea of a werewolf film that operates more like a murder mystery. (Anyone remember 1974's The Beast Must Die? It's sort of in that vein but a comedy.) Kind of wish we had more of these. Good use is made of the growing suspicion and paranoia amongst the suspects.

Some may find the townspeople to be a little over the top. Nor can I say that the characters or every line of dialogue are necessarily amongst the top tier of comedy (like in Clue). However, the cast really delivers. The lines come fast, and you get plenty of good bits. Basically, it's an appreciate the sum-of-the-whole rather than the details situation.

The leads, Veep's Sam Richardson as the new park ranger, and the AT&T girl Milana Vayntraub as a postal worker, are what really make the movie. They work really together and make a great duo. Vayntraub brings a quirky energy. Richardson is the MVP. He plays the well-meaning guy who's doing his best to stay keep things together. Richardson knows the perfect delivery for every line.

This is directed by College Humor alumni Josh Ruben who also directed the horror comedy thriller Scare Me. I think he'll be one to watch. There's a couple interesting camera shots that remain focused on one person or angle that work rather well. The song selection for this is also rather interesting and helps set the mood (especially the first song.)

Recommended. I mentioned some quibbles, but I really did enjoy myself.

Kenny MaiReviewed in the United States on July 3, 2021
5.0 out of 5 stars
Funny, tightly written whodunnit
Verified purchase
Low-budget, but makes up for it with clever writing, amazing direction, and superb editing. Acting is all wonderful, the comedic timing of all the lines is perfect.
15 people found this helpful

Lisa GarciaReviewed in the United States on July 5, 2021
1.0 out of 5 stars
Horrible. Wish I could get my money back....
Verified purchase
Disjointed storytelling. Bad acting. Tried too hard to be kooky. Unfunny. Not scary. The "jump scare" sound cues were ridiculously loud, ineffective and so plentiful that it made you just want to turn off the TV for some relief! If you love the werewolf horror genre, please don't watch this. Yeesh!
15 people found this helpful
See all reviews
Back to top
Get to Know Us
Make Money with Us
Amazon Payment Products
Let Us Help You
EnglishChoose a language for shopping. United StatesChoose a country/region for shopping.
© 1996-2021, Amazon.com, Inc. or its affiliates