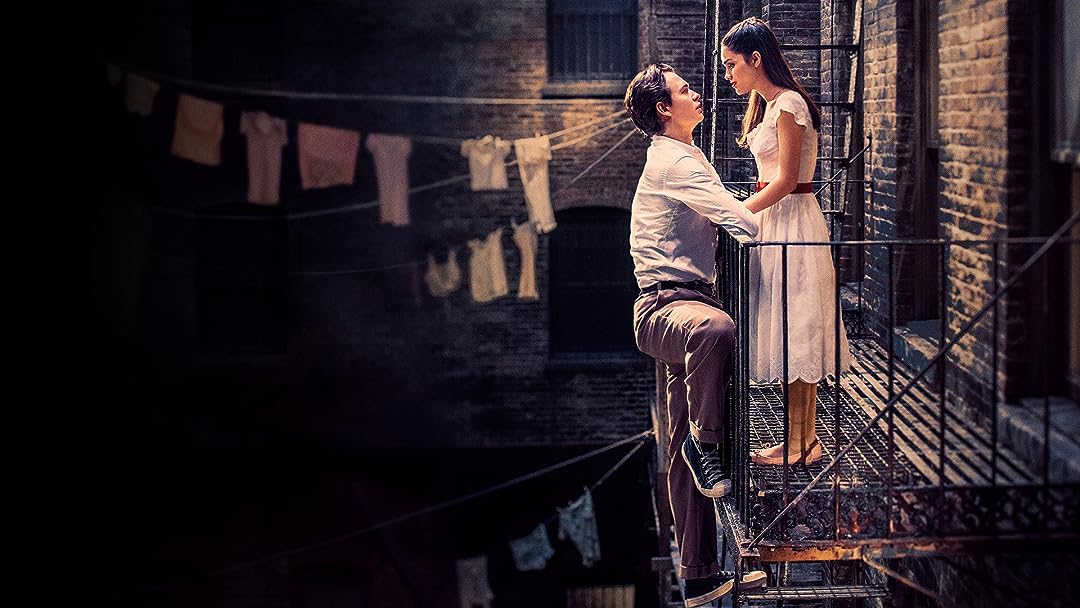 (9,059)
7.22 h 36 min2021X-RayPG-13
From producer and director Steven Spielberg, with a script by screenwriter and playwright Tony Kushner, comes WEST SIDE STORY. An adaptation of the 1957 musical, the film tells the tale of forbidden love and the rivalry between the Jets and the Sharks, two teenage street gangs of different ethnic backgrounds.

RBarberReviewed in the United States on July 1, 2020
5.0 out of 5 stars
West Side Story - The Movie
Verified purchase
I had this movie on VHS, but it's gone. A few years ago I took my daughter to see the revival on Broadway. The performance was wonderful. Growing up on the South Side of Seattle, live Musicals on the Broadway stage wasn't a reality. So we went to the movies. I saw this at the brand new Lewis and Clark Theater when it first came out in 1961. I loved it! The music was perfect. Of course it was, music by Leonard Bernstein, Stephen Sondheim, choreography by Jerome Robbins who co-directed with Robert Wise. A great cast starring Natalie Wood as Maria, Rita Moreno as Anita, Russ Tamblyn as Riff, George Chakiris as Bernardo. I always felt that Tony was miscast with Richard Beymer. He just didn't fit. Also outstanding, Tucker Smith as Ice, Tony Mordente as Action and David Winters as A-rab. That Friday night when I watched the movie I identified with those guys, The Jets. "When you're a Jet you're a Jet all the way, from your first cigarette to your last dying day". But, when Monday came around at Chinook Jr High, a couple of guys showed up with purple dyed shirts and narrow black ties, skinny black slacks and black jackets. Sharks! By the next weekend there had been a lot of Rit purple dye bought and white dress shirts turned purple. I was a Jet at heart, but dressed like the supper cool Bernardo, a Shark. After all these years the music will still pop into my head. Now I have a Blu-Ray DVD with extra features that I can play anytime I want to bring back those memories. In fact I think I'll put it on right now. By the way, Spielberg is supposed to be coming out with his version late 2020. Why remake a movie that's almost perfect? It won 10 Academy Awards including Best Picture. We'll just have to see. I heard the lovely and very talented Rita Moreno, so good as Anita, is in it. Maybe he'll have a better Tony this time. Like I said, we'll see.
33 people found this helpful

Oliver BordenReviewed in the United States on September 25, 2021
5.0 out of 5 stars
One of the greatest musicals ever
Verified purchase
There’s no point in reviewing this… it is a masterpiece, a miracle and simply stunning. Probably not known by many people today, because the film was shot in 65 mm, the original audiences saw a film that looked about 16 times sharper than most other movies made at that time. This rare 4K version, which is never been released on video, has such a deep rich colors you want to reach out and touch your screen.
The movie also received reserved seat roadshow engagements only in major cities, and it did not get into medium and small markets until a year after its release. The film played theaters and return engagements for several years after its original release. The soundtrack was a best seller on the charts for a number of years. It also looks like no other musical made by that time, it’s extremely expressionistic and stylized. A 70 mm print is played about once a year at the music box theater in Chicago… A big old neighborhood theater… The last time I went I showed up at the last minute and had a really hard time trying to find an empty seat… An empty seat for a movie that was more than 50 years old. This was one of the first films I went to by myself, so I have no distance from it. It literally changed my life. You can draw a straight line from the day I saw the movie to the day I earned a BFA degree in theater.
15 people found this helpful

skipreaderReviewed in the United States on July 6, 2015
5.0 out of 5 stars
IT DOES CONTAIN THE DVD & THE BLU-RAY!
Verified purchase
I think this "West Side Story" 50th Anniversary Edition Boxed Set is terrific. However, Amazon.com should be ashamed of themselves for failing to mention in their listing that a DVD copy is also included. I'm sure they didn't do it intentionally but I did waste some money on eBay buying a clearly marked Blu-Ray & DVD copy as well to get a DVD...which...unbeknownst to me was already included in the boxed set!!! Anyway, now you won't make the same mistake. This set includes a Blu-Ray AND DVD copy of the movie; a Blu-Ray Special Features disc; a Tribute CD;with 8 covers by different artists; a 5-5/8" x 7" hardbound book with pictures and stories about making the movie &, finally, a packet of 10 - 5 5/8" x 7" - movie poster reproductions (from around the world) on high gloss paper. All-in-all, a really nice set if you're a "West Side Story" fan I think you'd love this set..
126 people found this helpful

materialgirl8707Reviewed in the United States on July 19, 2015
5.0 out of 5 stars
One of the most magnificent films ever made in cinema history.
Verified purchase
One of the most magnificent films ever made in cinema history. West Side Story is one of those films that just blows you away because it is so infinitely and magnificently stunning!!!!!!!!!!!! It's mesmerizing, powerful, stunning, poetic, beautifully filled with art, moving, lovely, and downright beautiful. I have never seen so much stunningly beautiful dancing ever in the history of film until I first watched this stunningly lovely and beautiful movie. One of my favorite and most beloved movies of all time. It won 10 Oscars and every one of them was infinitely well deserved. All that hard work those actresses put into their dancing and the beautiful songs and so what if it was dubbed; Natalie was fabulous as Maria no matter what those critics say and so was Richard Beymer and Russ Tamblyn and Rita Moreno and George Chakiris. I don't see it as "dubbed" I just see it as helping the actors and actresses play their roles to their best. I love this movie no matter what the critics say. It's fabulous and stunning this movie. It's a film that stunningly captivates your heart and soul especially when you behold the beautiful dancing and the beautiful scores. For me West Side Story beats both Titanic and Ben Hur by a zillion points. Love West Side Story. One of the most stunning and captivating films ever made in the history of cinema hands down.
65 people found this helpful

Gregory BennettReviewed in the United States on August 9, 2018
5.0 out of 5 stars
Excellent restoration of the classic film
Verified purchase
I do not, in general, enjoy musicals; but I grew with West Side Story so it is firmly lodged in my mind as a timeless classic. My big sister was a teenager then, and I heard the soundtrack so many times that I have all the songs committed to memory, playing in my head for all the decades since. If Broadway isn't your thing, then West Side Story might not be, either.

You probably know the basic story: It is fundamentally a retelling of the tragedy of Romeo and Juliet set in 1960's New York, with street gangs substituted for the squabbling families and presented as Broadway musical from that period.

This presentation on Blu-ray is flawless, as best I can tell; and perhaps even better than the original film.

taajReviewed in the United States on May 25, 2022
5.0 out of 5 stars
Review for the Steven Spielberg Version
Verified purchase
There really ought to be a separate review for the original version of West Side Story and the new one. That's so confusing.

Anyway, both are amazing, and this review is for the Steven Spielberg version.

This telling has all the original music and enough of the original story and choreography to feel familiar, yet still be new. Some of the dances are set to different parts of the story. The settings for many of them are changed. For example, "I Like To Be in America" is moved from the rooftop to the city streets.

The performances are all strong and each actor/singer/dancer makes it his or her own. After the first few minutes, I stopped mentally comparing it to the original. With the exception of Rita Moreno, all these actors were new to me, and I appreciate the look at new talent.

I liked and appreciated that the Puerto Ricans were actually Latino and spoke in Spanish. No subtitles were given. It was as if to say, "if you're not Latin, figure it out. They are having their own moment, " which was okay.

The finale in the original is strong and pulls at your heartstrings. The same is true with this version. I think all will find it satisfying. Give it a go.

Matthew D'SouzaReviewed in the United States on November 5, 2018
5.0 out of 5 stars
A Mesmerizing Musical Like No Other!
Verified purchase
West Side Story (1961) is an enjoyable breeze of a musical movie. Writer Ernest Lehman's story is a clear re-imagining of William Shakespeare's Romeo and Juliet, but instead of differing social classes, West Side Story takes on racial tensions in America. The themes of understanding, diversity, love, hate, and forgiveness all still ring true to America's treatment of immigrants and foreigners. West Side Story is unfortunately timeless.

Director Robert Wise perfects and reinvents the musical on the big screen with vivid color schemes, intricate choreography filmed with precision, tender close ups, stunning wide shots, and breathtaking long tracking shots that pan across the screen. Wise proved he is a master director with such impressive skills that every single scene has memorable movements and beautiful framing.

I must mention the legendary composer Leonard Bernstein's iconic score for West Side Story. The sweeping symphonies meet intimate string in one of the most imitated and ripped off scores ever. Bernstein's original music is so lovely, I often found myself drifting off into my mind enjoying all the music on its own merits. Speaking of which, Stephen Sondheim's lyrics are as poignant in his message as the rest of the play's script. The commentary on love and race alike moved me.

Lastly, the acting is pretty touching, but no one matches the charisma of Rita Moreno as Anita. Her stunning looks match her heavenly voice and dear personality. Moreno just hypnotizes you while you watch West Side Story. Natalie Wood as Maria acts wonderfully, but her vocals were clearly not strong enough for this musical, so she got dubbed over by a brilliant singer. Richard Beymer as Tony is no dancer, but his voice is so powerful and captivating that you cannot help but like him. Finally, George Chakiris as Bernardo is an excellent dancer and piercing actor.

In short, watch West Side Story. This movie makes Romeo and Juliet more palatable, while enchanting you with its alluring score. The filmmaking is peerless and the acting is solid. Give West Side Story a chance.
8 people found this helpful
See all reviews
Back to top
Get to Know Us
Make Money with Us
Amazon Payment Products
Let Us Help You
EnglishChoose a language for shopping. United StatesChoose a country/region for shopping.
© 1996-2022, Amazon.com, Inc. or its affiliates