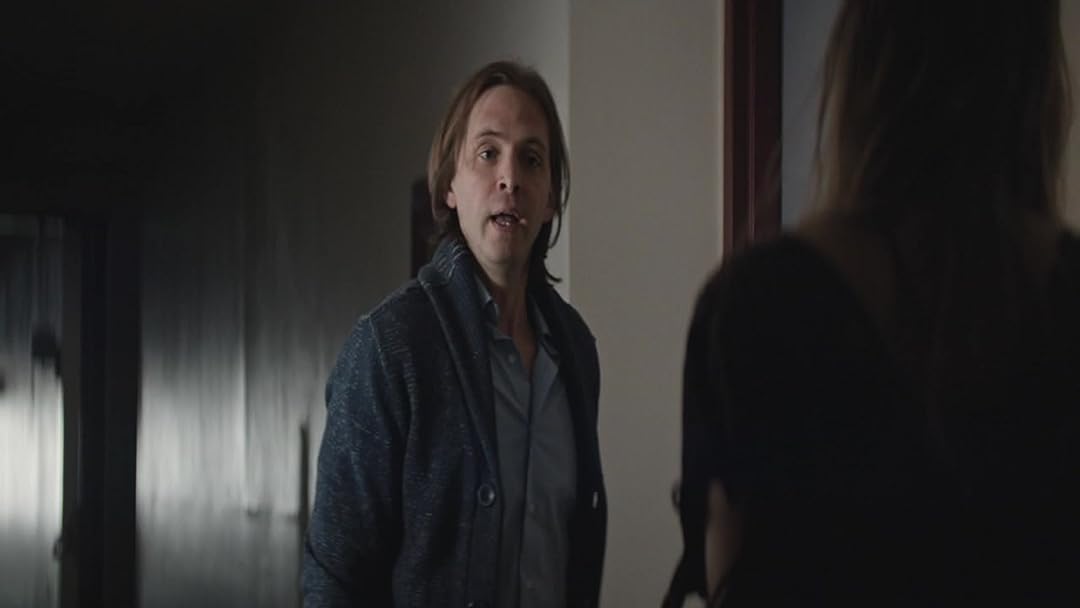 We've Forgotten More Than We Ever Knew

(85)
5.01 h 28 min201713+
After traversing a hostile post-apocalyptic wilderness for many years, a pair of survivors encounters the ruins of a vanished society. What they discover will threaten their relationship, their memories, and their future.

AllisonReviewed in the United States on November 25, 2017
4.0 out of 5 stars
Strange love triangle in a post apocalyptic world
Verified purchase
I don't know if this movie is supposed to take place in some alternate, post apocalyptic future or an alternate dimension, but I liked it because it was so different from standard studio fare. The film contains only three characters--a man (Aaron Stanford), a woman (Louisa Krause), and a mysterious man that lives in a pool (Doug Jones). The man and woman have been wandering the post apocalyptic landscape for years but come upon an abandoned hotel. They stop over at the hotel and enjoy "luxuries" like cooked food, shaving, and bathing with soap. They even begin a romantic relationship. But they both encounter a mysterious man lying motionless at the bottom of a drained pool, and he brings tension between the man and woman as he slowly comes back to life. A strange kind of love triangle develops among them. Don't expect everything to be neatly answered in this movie. It purposely leaves the audience to come up with answers on their own. It's an odd little indie gem of a movie, combining aspects of drama, post apocalyptic sci fi, and horror. The three leads work well with each other and give solid performances.
26 people found this helpful

PolarbearReviewed in the United States on July 12, 2018
5.0 out of 5 stars
It's unusual, but I enjoyed it. If you like your movies strange, you might like it, too.
Verified purchase
I enjoyed this movie. It is not your standard post-A movie. No real struggle, no monsters, no real violence or anything; just two survivors who stumble across a massive hotel complex amid a vast and seemingly endless winter forest with no signs of man. The two survivors are a man and a woman, but they don't seem to be a couple and they appear to know nearly nothing about each other. Finding the hotel full of supplies, you would assume they have it made, but as they adapt to civilization, and they become more and more civilized in each scene as they abandon their wild ways, they become more and more miserable, unable to communicate with each other, and a vast chasm appears between them, which is strange, because they seem to have it made in the shade. The hotel provides food, alcohol, a bath, electric lights, art, music, and a comfortable life. It also provides them with a mystery in the form of a strange, silent, stiff, robotic man in the bottom of an empty pool. For some strange reason, neither one tells the other about their new companion, who slowly starts to come back to life. The more then 3rd man awakens, the more the silent gulf growing between them blossoms into hostility, culminating in a bizarre, unearthly howl and a strange waltz. The pair then realize they must abandon this strange place and return to the wild.

This strange movie made very little sense to me, but I enjoyed it. It was very different from the usual post-A fare and it was all the more interesting for its lack of violence, dialogue, or over-done plot lines. There's no hero/anti-hero. There's no fuel or medical supplies or "bullet farms" or anything else to fight over. There's no cargo/valuable person/plague cure/McGuffin that needs to get from X to Y. The monsters/biker gang/zombies aren't going to break through the barricades. The government isn't going to swoop in at the end to save everyone.
The loose strands will not be tied up for you in the end.

The two end up exactly as we started with them and that's all you get.
The story is very open-ended, leaving the attentive viewer to come up with their own answers. I did not find it pretentious or snotty, just different. I would recommend it to anyone who doesn't need run-of-the-mill violence and easily-predictable plotlines in their movies. I would recommend it to my friends and I would watch it again.

jarReviewed in the United States on August 19, 2018
5.0 out of 5 stars
a well-crafted work of art
Verified purchase
I like run-of-the-mill thriller/post-apocalyptic scifi as much as the next person, but I also enjoy a film that is art, doesn't tell all, and gives me more a cheap thrill. If you are looking for a film that hands you all the answers, some straight-forward post-apocalyptic tale of protagonists struggling to survive under the constant threat of zombies, aliens, pandemics, etc. and couldn't care less about artful cinematography, brilliantly imagined and acted characters, and can't explore and imagine and wonder along with the writer/director as you watch a film, this is probably not for you. Or if you're not in the mood for that today, move along and save it to your watchlist.

The setting is an After of some sort, a world with toxic clouds that roll in and threaten to choke the life out of the living. The protagonists, a man and a woman, are traveling to a place that can be called home. You get the impression that they have completed much of the journey. Along the way they find two towering buildings of a hotel with everything they could need for a while. The man is immediately at home in the hotels, but the woman, who seems more wild (great acting and screenwriting), who seems to remember less from the time before, regards the hotel and its comfort with skepticism and a little disgust. If it isn't home, it isn't where she wants to stay. But hungry, tired, and in need of shelter, of course they stay. And as they stay longer, the hotel and its modern comforts and old secrets change them. And while you'll get to know some of those secrets that are strangely terrifying and sad, you may not understand them all. I was held captive by the tension between the man and woman protagonists as they changed, as they kept secrets from each other, and the secrets themselves. Clearly a lot of 1-star reviewers watched it until the end too. There's a reason for that: this is great film-making, great screenwriting.

There's a lot of metaphor in this movie, and I suspect that some of the closure we crave so much didn't happen for the writer/director, either. The journey is circular--the characters don't get to an end but rather back to the journey itself, the substance in between having changed what they remember, maybe how they remember, and perhaps what they seek.
7 people found this helpful

RogerReviewed in the United States on January 1, 2020
4.0 out of 5 stars
This was a great, minimalistic movie that stands out amidst a sea of similar movies.
Verified purchase
With a tiny cast and few locations, this story ends up making you feel like your glimpsing part of a vast world. Without needless exposition being thrown at you, you are instead allowed to ponder the details. This is how many great movies used to be made and it's a dying art. The ending might be a little predictable but the story is no less enjoyable. There are some creepy moments to be found without resorting to cheap jump scares.
Hopefully you can watch this movie with someone who will not ask you what's going on every second, because they will be watching the same movie that you are.
4 people found this helpful

Keli C.Reviewed in the United States on April 3, 2020
1.0 out of 5 stars
Who Was That Guy?
Verified purchase
I believe anyone that takes time to develop a film and gets it into production is credibly talented. Therefore, I do not like writing a negative review. However, this film was not very good. If someone wants to see the film, I don't want to ruin the story, however, who was the robot-like guy during the entire story? Just maybe answer that question? Was he an alien? Did the world end due to his music? Or was it because he was the manager of the hotel? So many questions with so little answers? I am also very sorry to mention that I was not a fan of the main characters in the movie either. I just believe there had to have been a better choice for these roles. Although, I thought the makeup and the costume design was perfection.
2 people found this helpful

The CriticReviewed in the United States on August 27, 2018
1.0 out of 5 stars
just because you can doesnt mean you should.. will amazon ever vet thesese films.
Verified purchase
overall quality of production... basement film level... writing contrite, settings contrived, and acting is D level...
Wish these low/no budget film star and producer director wanabes would go practice some where else... better yet .. come on amazon, why am I paying 130 per year for you to just throw any ball at the wall hopeing it will stick... get serious and start vetting these programs. better yet ... let me select a levle of service that is less expensive and excludes these "movies" alltogether
4 people found this helpful

Michele Elaine LeinReviewed in the United States on April 10, 2020
3.0 out of 5 stars
Three stars only because it's an art house indie
Verified purchase
I can deal with strange movies with no answers as much as the next gal, but this left me wanting more. That notwithstanding, I at least would have liked some answers, even the "cryptic have to reason it out and draw my own conclusions" type that would have given me some idea, any idea, about the events in their world that caused the whole apocalypse. And what was with the mannequin/AI guy? Why was he so controlling of the woman when he finally came to life? Why was he created? Were there others like him who rose up and cause more destruction than they could handle? And what was with the mirrors and malleable walls? I liked this film, but it ended too soon.

L. MartinReviewed in the United States on August 23, 2018
2.0 out of 5 stars
Talk About Privilege!
Verified purchase
These people have found probably the best and safest imaginable place to live that could ever be found in the wilderness of their world. And they take it downhill from there.

I don't believe that they, especially the woman, would act like this after years of fruitless walking, being dirty all the time, etc., etc.

If there was a message to this movie, I didn't get it.
5 people found this helpful
See all reviews
Back to top
Get to Know Us
Make Money with Us
Amazon Payment Products
Let Us Help You
EnglishChoose a language for shopping. United StatesChoose a country/region for shopping.
© 1996-2022, Amazon.com, Inc. or its affiliates