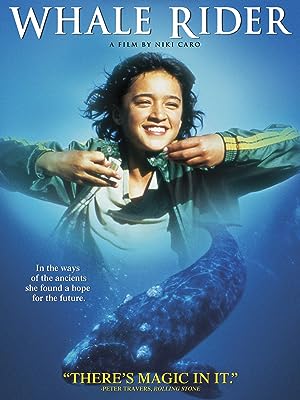 EstherfanReviewed in the United States on January 12, 2019
5.0 out of 5 stars
Spoilers that will hopefully make you want to see this extraordinary film
Verified purchase
Sorry, but I have to go ahead and spoil this movie for you, because I have to explain what is going on because what is going on is so incredibly beautiful. There is a proud Maori man who is descended from chiefs, who believes his people are in decline and need a new leader to rescue them. He believed his first son to be this person, but he was no leader. His sons wife was pregnant with twins, a boy and girl, and then he firmly believed the grandson would be the leader. Alas, the son’s wife and the baby boy died in childbirth, and the grandfather fixated on blaming the infant girl for all this misfortune. As time went on a very strong bond developed between the grandfather and Pai the girl, although he continued to harbor this strong belief. The gorgeousness of this film lies in the girl’s recognition and sadness that her beloved grandfather rejects her in this way, and at the same time her quiet utter security in knowing that she is in fact the leader he’s actually been waiting for—his traditional misogyny just can’t see it—and her willingness to love him even while he’s breaking her poor little heart. If you are now thinking it would have to take an extraordinary child actor to pull this off, you’d be right. It’s one of the greatest child performances ever committed to film.
28 people found this helpful

Preston MoserReviewed in the United States on November 22, 2019
1.0 out of 5 stars
Disc Left Out the Most Important Part of the Movie!! *SPOILER ALERT*
Verified purchase
This is one of the best movies I have ever seen, but this disc omitted the most crucial part of the movie.
*** SPOILER ALERT ****
In the hospital scene after Pai rides the whale and is unconscious in the bed, the grandfather speaks Maori to her, and in the movie an english translation appears as a subtitle on the screen with words to the effect of "Wise Leader, forgive me for I am just a fledgling and new to flight". Seeing this translation of his Maori words is one of the most powerful parts of the movie, but on this disc, we hear the Maori words, but we do not get to see the English subtitle to know what the Maori words mean. This is a HUGE mistake and takes away one of the most important parts of the film!

A SullivanReviewed in the United States on October 1, 2020
1.0 out of 5 stars
Avoid the 15th Anniversary edition ~ it's broken
Verified purchase
This is such a wonderful story and movie, but customer reviewer Preston Moser was right ~ the digital version of Whale Rider "omitted the most crucial part of the movie.
*** SPOILER ALERT ****
In the hospital scene after Pai rides the whale and is unconscious in the bed, the grandfather speaks Maori to her, and in the movie an english translation appears as a subtitle on the screen with words to the effect of "Wise Leader, forgive me for I am just a fledgling and new to flight". Seeing this translation of his Maori words is one of the most powerful parts of the movie, but on this disc, we hear the Maori words, but we do not get to see the English subtitle to know what the Maori words mean. This is a HUGE mistake and takes away one of the most important parts of the film!"

As far as I'm concerned, this movie is BROKEN. I actually bought it and went straight to that part to check. Since it wasn't clear in the review, I figured the 15th anniversary version should have MORE to it rather than less, right? WRONG CHOICE. It turns out that once you activate viewing, there is no going back ~ all return rights are revoked, even if it's provable that I watched less than 5 minutes including all the fast forwarding. That's on me for not checking first, but maybe this post will save others the same fate.

RESOLUTION I'D LOVE TO SEE: I want the chance to either pay the difference for the regular version (as long as it's got the subtitles where indicated) OR get my money back and the digital copy removed from my library. It's NOT the same at all ~ it's too pivotal a moment to be omitted.

Old Timer TooReviewed in the United States on November 22, 2016
5.0 out of 5 stars
Outstanding Family Film
Verified purchase
This is one of the better family films and I highly recommend it for preteens and up. Pai is largely ignored by her grandfather, who wanted a boy, and when she attempts to learn the skills of a chief is rejected forcefully (but not psychically) by him. Her persistence to become what "fate" destines for her part of the stubbornness she inherited from him, although it is not recognized.

The cast is outstanding, most of whom are actual members of the coastal villiage where the film was made.Young Keisha Castle-Hughes was selected to play Pai and is remarkable. Some of the scenes brought both my wife and I to tears, they were so powerfully portrayed.

The extras on this special edition are a treat and include cast interviews along with deleted scenes. I wish a cut was available with the deleted scenes included where they were cut.
7 people found this helpful

Kindle CustomerReviewed in the United States on November 14, 2018
5.0 out of 5 stars
An utterly beautiful film...
Verified purchase
I loved everything, main characters, supporting characters, scenery, etc. Probably my favorite part though was the interweaving of the reality of the sexism of a belief structure with the power and joy of the spiritual. One of my favorite movies ever.
6 people found this helpful

KoreyReviewed in the United States on September 11, 2021
4.0 out of 5 stars
Good transfer by Shout Factory; decent plot
Verified purchase
In the technical aspect, the greens and blues of NZ’s land, sky, and sea really pop off the screen. Clarity is as close to 4K UHD as a blu-ray can get. No noticeable video artifacts like digital noise.

On a critical note, the movie is a little slow, but it can be rewarding if you allow the plot to unfold without losing patience. I found Paikea’s narration to be a bit muddy, but it could well be the fault of my audio set up than her monologue. The story leans heavily into the drama, so be prepared - not a lot of fun and laughs. I’m glad I watched this film and that I now own it. It deserves its praise. However, it might be a while until I give it a another view.

Amazon CustomerReviewed in the United States on November 17, 2019
5.0 out of 5 stars
PAI!!
Verified purchase
I really like this movie it shows that a female can do what a male can do. Koro was the leader of his tribe and was upset when his son twin son died and his grand-daughter survive because he was hoping his new grandson would be the new leader of the tribe. At the hospital he does not wat Pai but her grandmother wanted to keep her. Koro blames Pai for conflicts happening within the tribe and he blames her dad for not becoming the next leader. Soon Koro warmed up to Pai by dropping her off and picking her up every day from school on his bike. When Pai dad came home to visit and made the announcement that he met someone and she was pregnant. Koro was upset and Pai learned her granddad did not want her because she was a girl. She decided to leave until she heard the whales calling her. Pai does not stop trying to become the next leader of the tribe just because she was a female even though her grandfather tried his best to stop her. I did not like how her Koro opened the all boy school to find the next leader and kicked Pai out. You could tell Pai really loved her grandfather and it hurt her when he would be mean to her. Kicking Pai out of the all boy school did not stop her from becoming the next leader. In my opinion Koro knew Pai was capable of being the leader when she was able to beat one of the boys with the fighting stick but he did not want a female to lead the tribe. I knew Pai would find the whale tooth her grandfather threw in the ocean; at this point she is now the new leader of the tribe. Another touching moment of the movie is when Pai won the speech contest at her school and she dedicate her speech to Koro and the traditions of the village and Koro did not show up. Pai bring the whales back to life was one of my favorite scenes in the movie, and her grandfather asked for her forgiveness and declaring her as a leader. The movie left in a happy ending with her dad and new girlfriend all together.
2 people found this helpful

L. S. ReedReviewed in the United States on January 11, 2012
5.0 out of 5 stars
Beautiful story, fabulous acting
Verified purchase
I've shown this movie to one or more of my classes probably a dozen times and it's still enjoyable.

The story is set among a group of Maori in present-day New Zealand. The two main characters are the chief of this group ("Paka") and his troublesome 13-year old granddaughter ("Pai"). The grandfather loves Pai as a granddaughter but also blames her for "the troubles," which he believes started the night she was born. (Her brother, who should have become the heir, died at birth, as did the mother; the father, Paka's eldest son, was so distraught that he fled New Zealand and established himself as an up-and-coming artist in Europe -- abandoning his people, in Paka's view.)

From the beginning, Pai shows unusual talents and interest in "the old ways," but Paka cannot see it because of his obsession with a male heir. At one point he gives up on his family and starts a school to find the potential heir among the first-born sons of the tribe -- with rather unpredictable results. If Amazon had a 6 star rating, I'd give this movie 6.

The casting of this movie is brilliant. The conflict between Paka and Pai sizzles and the supporting characters (notably Paka's wife and Paka's two sons, the father and the uncle) are brilliant. Even the walk-on characters, like the other tribe members and the boys who attend the school are great.

The scenery is fabulous and the story unfolds in a beautiful way. The movie is enjoyable on so many levels -- as good entertainment, as an inspiring story, as an interesting perspective on a different culture, or as a story on the generational conflict, families, and love.
14 people found this helpful
See all reviews
Back to top
Get to Know Us
Make Money with Us
Amazon Payment Products
Let Us Help You
EnglishChoose a language for shopping. United StatesChoose a country/region for shopping.
© 1996-2021, Amazon.com, Inc. or its affiliates