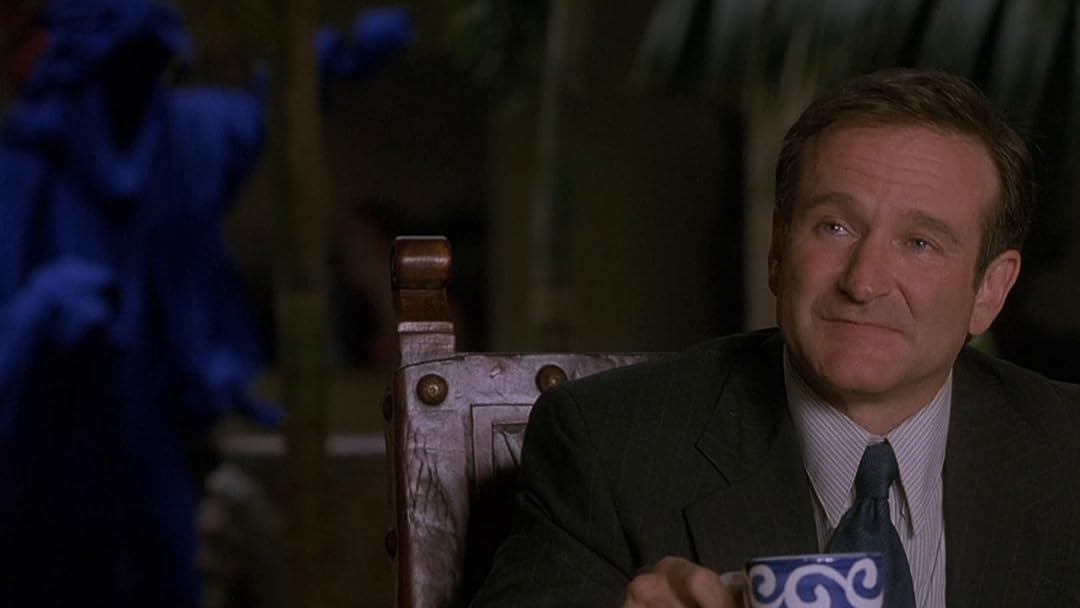 What Dreams May Come

(10,051)7.01 h 53 min1998X-RayPG-13
After Chris Nielsen (Williams) dies in an accident, he tries to remain close to his beautiful mortal wife, Annie (Annabella Sciorra). With the friendly spirit (Gooding, Jr.) assigned to guide him, he begins to adapt to his new state of being in a setting that can only be described as heavenly. But when his distraught wife takes her own life, she is banished to an eternal damnation. Chris vows to find her so they can share eternity together, but no one has ever succeeded in rescuing a soul from such a horrific fate. With the help of his heavenly friends, Chris sets out on the most perilous and harrowing journey of his life, or afterlife: a quest for everlasting love that will take him to hell and back!

Michael M.Reviewed in the United States on July 2, 2019
5.0 out of 5 stars
Make sure you have Kleenex
Verified purchase
I hate love stories, and soapy movies, they really bore me. But, I have to say I am an old softie. I actually saw this a while ago but my girlfriend never saw it so I rented it so she could. And you know, it still made me cry.

I don't really believe in Western religions (Judaism, Catholicism, Christianity, Islam) because they keep having to reinvent themselves when science discovers something new. Like, when Judaism's begats ended up taking us back only so far and science and archeology says we go back a lot further than that. And then most Christians tell you that they and the bible is so holy, yet the bible was built in 325AD at the Council of Nicea and all recollections of Christ didn't show up until after 100AD. It is all a way to control people. Eastern philosophy is more up my alley. More mathematical and more believable and it's funny how a Vedic scripture mentions when this current phase started and it coincides with science.

Anyway, the reason I threw all of that in is that whoever wrote this had some kind of vision to what happens to you after you leave your body. How would I know, I have had my own experiences.

The acting is great, the movie, while it seems so much like fantasy, is very well written and not so much fantasy if you have seen these things.

This is a must watch movie.

BrittanyReviewed in the United States on January 5, 2019
5.0 out of 5 stars
Moving and beautiful movie
Verified purchase
If you've read the book, I can tell you right now, the movie is different. Similar, but a lot of changes. That being said, I loved this movie. It was touching and beautiful. The concept of a personal heaven and hell being your worst moments was something I never thought about, since I saw it when I was youngish, but struck a chord with me. The concept of soul mates feeling each other even beyond life and death was fascinating.

I'm a big robin williams fan, and it really made me see how he could so easily do both comedic and serious roles. His tragic loss is something I feel even to this day, and though the plot of this movie feels a bit harder to cope with now, it's just a movie.

In this movie, chris and his wife, annie, lose their children to a car accident. Years later, chris dies in a similar way, leaving his suicidal wife behind. He awakes in his personal heaven, painted by his wife (love of art between them, art helped her cope with her loss), and finds a connection to her even in the afterlife. He later learns she kills herself. After finding out she went to her own personal hell, chris risks his own soul to save her and bring her back to heaven, like he helped her when their children died.

It was so touching and I suggest anyone to give it a try.
25 people found this helpful

BvhmReviewed in the United States on February 12, 2020
5.0 out of 5 stars
Watch if only for the different types of grief
Verified purchase
I love/hate this movie. Every few years I re-watch it, and half of the time I feel validated, but the other half feels as if I’m left drowning in self inflicted self pity.
If you have ever lost anyone - especially by the way the wife left, you wonder if it’s ever possible to get validation for your own feelings surrounding it. It’s always what could, would, should have done different. It sticks with you for the rest of your life like a scar that won’t go away and you know it. You eventually come to terms with what you do know, but every now and again, Oof.
When the wife (who doesn’t get enough credit for her haunted world) is thinking of divorce, her reason seems absolutely valid, until he gives his response. Is that not enough? Yes it is, but then Chris really leaves!
Only when he actually (physically/spiritually) tries to prove it is she set free. This movie is so dark but it is bright at the same time. Full of metaphors often played out in religious themes for those who thankfully haven’t been haunted by a passing as tragic as this.
I highly recommend it. If you are a Robin Williams’ fan, I also highly recommend “The Fisher King”
15 people found this helpful

SpiralReviewed in the United States on October 12, 2016
5.0 out of 5 stars
OUTSTANDING
Verified purchase
This is an OUTSTANDING movie. The story is beautiful and the casting is perfect. Whenever I write these reviews I don't say much about the actual story so as not to spoil it for someone who has not seen it. If you believe there is life after death or at least the possibility of life after death this is a must see. I watch it often and it never fails to hold my attention and bring smiles and laughter along with the gorgeous scenery. Recommend this movie for older children as there is one section that would be scary for the younger ones. Watch and enjoy this beautiful movie.
46 people found this helpful

Photo Film ClubReviewed in the United States on July 23, 2019
5.0 out of 5 stars
A very heartwarming story
Verified purchase
Warning: Spoilers ahead>>>
This movie is one of my few favorite all-time go-to movies when I'm feeling down or doubtful about life. It is a story of love, tragedy, hope and rebirth. There's nothing to not like about this movie. The cast give a very believable performance, the music score is excellent, the tempo of the story is perfect, and the visuals are fantastic. The most touching part was when Katie was dying, but I was overcome with joy when she appears in Heaven. Animal-lovers will understand.

All in all, this is a wonderful family film, with the exception of a few F-bombs, and should be required viewing for children at a certain age, to teach them that death is part of life, and that it is not an end, but a beginning.

What a wonderful movie. I gladly and emphatically give it 5 stars, 2 thumbs up, and a standing ovation as well. Even though it is a bit dated, I still highly recommend this movie. This one is a "Must Purchase" and should be on everyone's watch list at least once every few years.
11 people found this helpful

Christina ReynoldsReviewed in the United States on July 19, 2020
4.0 out of 5 stars
Visually stunning and emotionally sensational
Verified purchase
'For in that sleep of death, what dreams may come,
When we have shuffled off this mortal coil,
Must give us pause. '

Named after a line in a poem in which Hamlet contemplates death and suicide,'What Dreams May come' follows Chris Nielsen (Robin Williams), an individual that is recently deceased and attempting desperately to reconnect with his mortal wife, Annie (Annabella Sciorra). After his wife commits suicide, Chris begins a journey in the afterlife in an attempt to reconnect with her despite the odds being against him.

Considering the subject matter being mature, this film is one I would consider to be kid-friendly; the death scenes are brief and/or alluded to, and there's no scenes that are particularly graphic or distressing. The dialogue and vocabulary used in the film is down -to-earth, and is used in such a way that both adults and children can understand and relate to. For that alone this gets at least a 3-star rating.

This film was nominated for an award for best art direction, so knowing this my expectations going in to this as far as visual appeal were high to begin with. It goes without saying that these were exceeded, as the cinematography is exceptional - the colors (in both presence, and absence at times) had an intentional variety to them, and there were even some scenes where the /texture/ of some substances were clear. This movie is in one word: stunning.

My only complaint (without giving too much away) i s that we are told in the film that hell is a place that pain is present, but that's not all it is - the problem however, is that when Chris travels to hell, we aren't given much as an audience evidence (at least, visually) to suggest that. This doesn't take much away from the film, and I'm happy to say that this movie doesn't stray much from the book it is based off of - so this is really just me being nitpicky. I just think a little bit of complexity in this area would have been appreciated, and I'm sure another audience member out there might agree with me.

At the end of the day, this isn't just a movie about death; like the novel, it's meant to inspire some hope about the afterlife, which is in some ways an inevitable destination for every single living being. The emotions are intense (and, they mirror reality) but they do what they are meant to do - and that's make us a little less fearful about dying when it is our time to do so.

As always,
rest in peace to the beautiful actor that was Robin Williams.

I would recommend.
3 people found this helpful

Beata Reviewed in the United States on May 22, 2020
1.0 out of 5 stars
Terrible movie!
Verified purchase
If you lost a loved one or someone to suicide, do yourself a favor, and do not watch this garbage... everything was good and comforting till the movie switched the scene to a horrific place, that will give you nightmares.. whatever you believes are; your loved one is in a peaceful place! I did not like this movie and I wish I never watched it! Loosing a loved one is horrific enough, you don’t need to think that they are suffering more in afterlife..
The scenes in the painting were beautiful, but the focus on hell really bad. Like others said, very boring as well...
5 people found this helpful
See all reviews
Back to top
Get to Know Us
Make Money with Us
Amazon Payment Products
Let Us Help You
EnglishChoose a language for shopping. United StatesChoose a country/region for shopping.
© 1996-2021, Amazon.com, Inc. or its affiliates