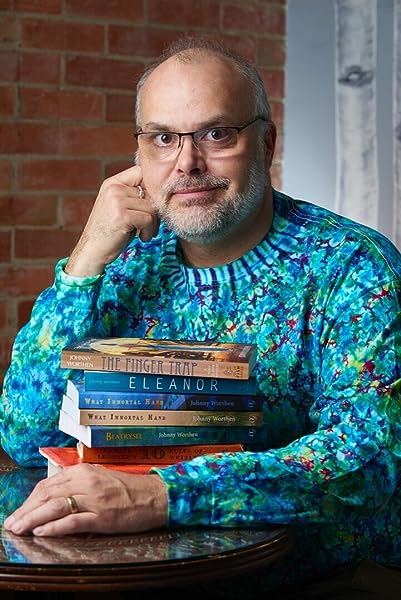 by Johnny Worthen (Author)
4.7 out of 5 stars 35 ratings
See all formats and editions
Sorry, there was a problem loading this page. Try again.

One crime leads to another; one time to a time before. Michael Oswald pulls it all apart as though tugging a thread on an old sweater. A theft to a murder to crimes beyond imagining, he doesn’t understand what he’s investigating. But he’ll remember. It began with a missing truck.
Read more
Previous page
Next page

JOHNNY WORTHEN grew up in the high desert snows and warm summer winds of the Wasatch Mountains. He graduated with a B.A. in English, minor in Classics and a Master's in American Studies from the University of Utah. After a series of businesses and adventures, including years abroad and running his own bakery, Johnny found himself drawn to the only thing he ever wanted to do -- write. And write he does. Well versed in modern literary criticism and cultural studies, Johnny writes upmarket multi-genre fiction – thriller, horror, young adult, comedy and mystery so far. “I write what I like to read,” he says. “That guarantees me at least one fan and a hectic job for my publicist.”

When not pounding on his keyboard, teaching the craft, attending conferences and conventions, Johnny Worthen can be found with his wife and boys in Sandy, Utah.

David
5.0 out of 5 stars Exciting and Full of Surprises
Reviewed in the United States 🇺🇸 on July 30, 2020
Verified Purchase
Whenever I thought I knew what was going to happen next, I was proven completely wrong. This book blends the lines between genres, which, I believe, makes it more accessible to those readers who don't believe it perfectly aligns with what they typically read. I really enjoyed this and would recommend it to all.
Read more
One person found this helpful
Helpful
Report abuse

Johnny Worthen sneaks into our minds to choke out, if only for a moment, the faithful marriage of Christianity and the American soul. And in its place? He sets a sweet temptation against our tongues, a tale of bliss and madness well worth the read, if only we face our fear of it. In the shadows of our journey loom ash and blood as heralds of a new (old?) brand of salvation. Our ears fill with a song calling us to dance with Death herself. Worthen explores a new and distinctly American form of sainthood painted on the lonely highways of our desert desolation.

BBWrighter
4.0 out of 5 stars My God may not also be your God. I love this seldom trod subject
Reviewed in the United States 🇺🇸 on March 16, 2019
Verified Purchase
I loved the continual action and the moral conflict. I am a map person so of course I had to follow Michael as he wandered around the west. This book held my attention from the moment I started it and didn’t let me loose until I finished it. And for those who love being creeped out, like I do, this book delivers! Way to go Johnny. I loved it
Read more
One person found this helpful
Helpful
Report abuse

C Erick
5.0 out of 5 stars A riveting ride!
Reviewed in the United States 🇺🇸 on April 1, 2019
Verified Purchase
A very well written book that kept me turning the pages. The author really knows his subject material--there was a very organic feel to every element. As a reader, I felt immersed into Michael's world. Interesting characters, interesting twists and turns. I did not see the end coming! Looking forward to reading another work by this author.
Read more
Helpful
Report abuse

Chaz
5.0 out of 5 stars Surprising, consuming
Reviewed in the United States 🇺🇸 on October 30, 2017
Verified Purchase
A complex tapestry woven of southwest (US) desert sands and the darkest imaginings. This book surprised me, (purposely) confused me, and by the last half, consumed me. It seemed to start off like a contemporary noir, but by the end I was awash in horror. Wonderfully unnerving. Beautifully and skillfully wrought. Complex. Well-researched. A roller-coaster ride that slowly gathers speed and never lets up. Will definitely read more of this author.
Read more
2 people found this helpful
Helpful
Report abuse

Ghoul Tape
5.0 out of 5 stars Worth reading
Reviewed in the United States 🇺🇸 on April 27, 2018
Verified Purchase
I seldom do reviews, but here's one all the same.
This dark mystery/thriller is excellent and has gotten me to take an interest in the rest of the author's books. If this quality is indicative of a general standard in Worthen's books, I can see him becoming as commonly read as the popular writers of today.
Read more
One person found this helpful
Helpful
Report abuse

digetta
5.0 out of 5 stars Great mystery and horror thriller
Reviewed in the United States 🇺🇸 on October 28, 2017
Verified Purchase
Great mystery and horror thriller. I couldn't turn the pages quick enough, the ending blew me away! I'm a super fan of Johnny Worthen, and this book does not disappoint. Highly recommend.
Read more
Helpful
Report abuse

Franklin
5.0 out of 5 stars A Complete Story
Reviewed in the United States 🇺🇸 on April 18, 2019
Verified Purchase
It is always nice to find a well written book with a complete story, a satisfactory ending and well drawn characters.
Read more
Helpful
Report abuse
See all reviews