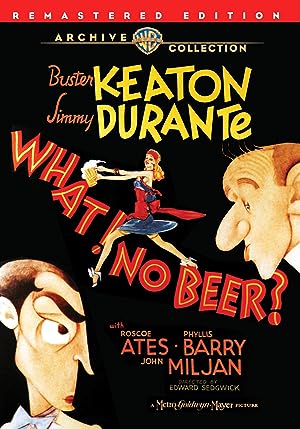 (32)
5.61 h 5 min19337+
Two of comedy’s greatest masters appear together in this effervescent and irreverent slapstick about a couple of regular guys trying to cash in on the end of Prohibition.

Randy E. HalfordReviewed in the United States on October 21, 2012
5.0 out of 5 stars
Keaton, Durante, and lots of beer
Verified purchase
Reunited with co-star Jimmy Durante and comedy director Edward Sedgwick, "What! No Beer?" was really not a bad picture for the great Buster Keaton to exit on at MGM. Playing yet another "Elmer" (MGM must've thought Keaton looked like an Elmer), Keaton is a taxidermist who gets talked into investing in a brewery & thus, being first in line to satisfy the demand once Prohibition ends by his barber friend (Durante). But their manufacturing of "real beer" jumps the gun, and they first run afoul of the law, then get caught in the middle of a gang war struggle to take over their brewery. There's some side silliness when Keaton becomes infatuated with one of the gangster's moll. For whatever reason, Durante is particularly loud & annoying in this picture, his rantings making you appreciate the measured subtlety of Keaton, who takes some of the most spectacular pratfalls that most comics wouldn't do on a pile of marshmallows.
WNB is at least as frothy & fun as the brew it creates. The brewery scene is hilariously messy; Keaton dodging a truckload of barrels is a welcome tribute to his climactic boulder-dodging scene in "Seven Chances", capped by a sight-gag marathon; and getting half the town to flock to the brewery to drink all the "evidence" is a clever solution to the story. Durante steals the closing gag as he holds up a mug of beer, beams to the camera & says "It won't be long now, folks!" The End.
The one flaw in the picture is Keaton's pale physical appearance; reportedly, his alcoholism was especially excessive during filming. Thus, there are moments where either deep lines are etched in his face, or he looks slightly puffy & drawn-out. Yet, Keaton was still good, simply because he's Keaton, a master of timing.
After the disappointing "The Passionate Plumber", this film is cheerfully unrefined (no pun intended) but consistently funny.
Unfortunately, it wasn't long after WNB that MGM dropped Keaton's contract, and he moved on to other miscellaneous work. A rather sad fate for such a gifted comic genius. But at least we have comedies like this to savor!

DianneReviewed in the United States on June 1, 2012
3.0 out of 5 stars
Poor Buster!
Verified purchase
Not one of my favorite Buster movies, although as I've said before, I can't get enough Buster. The poor man was so ill at this period of time, and you can see it: sometimes it seems like it's all he can do to remain upright.

I've read many reviews of this film that seem to mock Buster's alcoholism, which I think is downright nasty. Put yourself in his place.

But the WORST thing about this film is the MGM-teaming of poor, ill Buster with (gawd) Jimmy Durante. Polar opposites, but not the kind who have chemistry. I'm surprised poor Buster managed to get off ANY lines at all with that jumping bean, Jimmy.
2 people found this helpful

Immortal ChoasReviewed in the United States on March 16, 2021
5.0 out of 5 stars
Buster Keaton and Jimmy Durante need I say more?
Verified purchase
This has to be one of the funniest movies ever!! Two of the funniest guys ever and I laughed so hard. If you are a Buster Keaton fan and haven’t seen any of his talkies this is a great on to watch

dambeaverReviewed in the United States on February 21, 2018
5.0 out of 5 stars
One of my favorite movie endings. The sort of thing my friends and I would dream about in college.
Verified purchase
I watched this madcap comedy about 20 years ago and loved it, especially the ending. I have been trying to get it from a library, but have had no success, so I decided that I would buy it. I will be hosting a movie night soon for some friends and, yes, beer will be "on tap."

PeterReviewed in the United States on March 19, 2014
5.0 out of 5 stars
Fun Movie
Verified purchase
My dad is 88 years old and I remember watching Jimmy Durante on TV as a kid. So when I saw this movie that has two of his favorites, Keaton and Durante I figured how can I go wrong and I didn't. We have watched this movie several times since it arrived and my dad can't stop talking about it after every watch.
One person found this helpful

zepolReviewed in the United States on January 1, 2015
3.0 out of 5 stars
Not bad
Verified purchase
The print is very good. The movie is like any comedy from the 1930s' so if you like 30s' LITTLE RASCALS, LARAUEL & OLIVER or MARX BROS. you'll like this.

Lauren A. HallReviewed in the United States on December 21, 2013
4.0 out of 5 stars
Great oldtime movie!!!!
Verified purchase
Back in the days when comedy was funny and simple and life was tough!!!! Keaton and Durante work very well together.
See all reviews
Back to top
Get to Know Us
Make Money with Us
Amazon Payment Products
Let Us Help You
EnglishChoose a language for shopping. United StatesChoose a country/region for shopping.
© 1996-2022, Amazon.com, Inc. or its affiliates