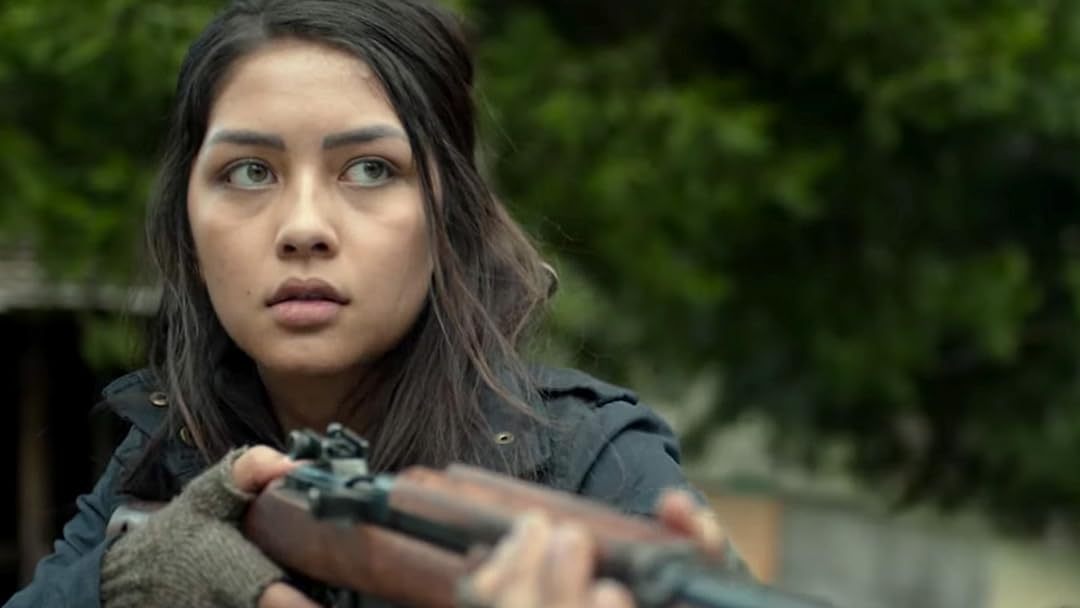 Thomas C.Reviewed in the United States on April 9, 2020
2.0 out of 5 stars
Stereo Typical Liberal Indoctrination Film
Verified purchase
Role reversal, twisted white semi Christian male rapists take hold in a post apocalyptical community to rebuild society against another twisted white male dominated barbarian society. Pretty, weak, mixed girl who doubles as a blacksmith who survives them all on will alone and walks to the coast and into the sunset... Completely made to trash white males and Christians, again... Typical Hollywood Liberal garbage.
53 people found this helpful

TBReviewed in the United States on February 20, 2020
1.0 out of 5 stars
Cliche
Verified purchase
Girl who is a master blade-smith goes up against evil, sexist white men. Yawn.
45 people found this helpful

Amazon CustomerReviewed in the United States on July 26, 2021
1.0 out of 5 stars
If you are REALLY bored
Verified purchase
I love post appocalyptic movies. Zombies, pandemics, natural disasters, you name it and I'm all in. So when I saw this movie I thought "Yeah! my people are calling". I wish I hadn't picked up the phone.
The movie starts years after some random disease has ravaged the world. It is never defined nor are we given any idea about what happens to those "infected". The only term we hear is about "beserkers" and we are given no idea what they are. There is absolutely NO back story given here. So go ahead and make one up if you want.
It then very predictably goes down the path of the stranger who wants to help but is really more twisted than the infected story line. Did this girl ever hear the term "Stranger Danger???" We know he's bad from the moment he reaches the gate. How this girl managed to survive all these years without a wariness of strangers, I will never know because she opens the gate and practically gives the house away.
From there she is dumb enough to leave her home and follow him into his "community" (and anyone who has ever watched one single episode of The Walking Dead knows NOTHING good ever comes from a place with the word "Community" in it.)
The movie does the typical walk down the Christianity-gets-twisted-and-the-new-version-is-nuts path. The worse part of it is that the Christianity part isn't even really doing the Christianity part well. The people are one dimentional, the bad guys are one dimentional, hell the whole story is one dimentional. The big moment fight scene is really more of a fisticuffs and if you sneeze you have (luckily) missed it.
The end ends with our "heroine" simply walking away.... No idea what from since pretty much everyone has decided to get off this sinking gravy train of a movie by that time.
Take my advice, next time a good disaster movie craving hits you, go on a diet and pass this one by.

nathan a yeoReviewed in the United States on February 5, 2020
5.0 out of 5 stars
I love Mimi Rodgers but she was B in this struggle
Verified purchase
For a Zombie movie it hit all my marks except thre were no Zombies. It also didn't give us speech after speech about How in fighting the Monsters to Save Humanity we lost our humanity and became monsters.
The Zombie Apacolypse has happened and gone. Some survivors have taken on the characteristics of the infected and run around rabid. Others havestarted a religouse cult of peace and harmony. A brother and sister become seperayed fleeing and when rejoined are on opposite sides
9 people found this helpful

IMOReviewed in the United States on June 11, 2021
1.0 out of 5 stars
Doesn't make sense
Verified purchase
The whole plot is based on the fact that her brother twisted his ankle and instead of using the gun to keep them safe, the bother insists that she abandon him and take the gun with her. That makes no sense and is completely unrealistic. The events that had to line up in order for these kids to end up in the storyline as they did in unlikely at best. It lacks character development and I found it all, well, uneventful. Maybe is was the script or bad casting, not sure, just didn't jive.

If the only thing holding you back from watching this are comments about this being political garbage, I'd watch it. There is no political angle here. Misogyny and cult mindset is present but that is far from political. Simply a likely scenario if the world did pause.
4 people found this helpful

Kindle CustomerReviewed in the United States on July 24, 2020
1.0 out of 5 stars
I like the thought of the plotline, but it was all kinda hohum.
Verified purchase
If you like The Terminator and Mad Max, you will not like this. I did like the main character - she has grit and tenacity, but other than that, the characters were all pretty boring. I am a Christian, but the supposed Christian characters were stupid. After the first 10 minutes of the film, it was pretty much downhill, same ole', same ole'. Bad writing, bad storyline, nothing interesting.
13 people found this helpful

Avid readerReviewed in the United States on May 3, 2020
3.0 out of 5 stars
"There is no room in this world for the wicked."
Verified purchase
The reason to watch this is the performance of Anna (Lulu Antariksa). We meet her with her brother, surviving in a cabin with her sick mother. Her brother is apparently killed, and her mother dies. Along comes Peter, smooth talking, and convinces her to come with him to a community where she will be safe. One gets hints early on about the nature of the religious community, and what is nice is that it slowly unwinds as to exactly what it is.

Supposedly set 25 years after a certain event, there is a serious disconnect with their wardrobes. While Peter has a tattered and worn tarp for a tent, the rest of the wardrobe is just too new looking, especially hers, which seems very tailored for her. This really causes me to mark down this movie.

But she finds out accepting Peter’s invitation was not in her best interests, but only in his. If she will be able to free herself of this burden is the remainder of the movie. The religious community is a very patriarchal community, and Peter is the religious leader, and he is her sponsor. When she questions his use of scripture, he explains to her that they are adapting scripture for the new circumstances.

It is not a particularly strong movie, but it is devoid of many things that get thrown into movies, often gratuitously.
3 people found this helpful

cheryl kayReviewed in the United States on August 16, 2018
5.0 out of 5 stars
Well acted intense movie
Verified purchase
Just bought this movie on Amazon Prime Video and I was on the edge of my seat most of the time. I am a Colin O'Donoghue fan and his acting as Peter didn't disappoint me from the beginning of the film to the end you see so many sides of his character. The actress who played Anna, Lulu Antariksa, was really good too couldn't take my eyes off of her an awsome actress. The rest of the cast was also very good especially Mimi Rogers and my favorite bad guy Jeff Kober. Really liked this movie and I already ordered it on DVD.
8 people found this helpful
See all reviews
Back to top
Get to Know Us
Make Money with Us
Amazon Payment Products
Let Us Help You
EnglishChoose a language for shopping. United StatesChoose a country/region for shopping.
© 1996-2022, Amazon.com, Inc. or its affiliates