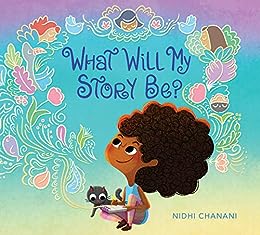 What Will My Story Be? Kindle Edition

by Nidhi Chanani (Author) Format: Kindle Edition
Editors' pick Best Books Ages 3-5
See all formats and editions
Sorry, there was a problem loading this page. Try again.
From the creator of the critically acclaimed graphic novel Pashmina, comes a new picture book that encourages kids to be their most creative selves and to imagine all the places that their stories can take them.

After spending an afternoon listening to her aunties tell her stories from their pasts, a young girl ruminates on all of the tales that she can create using her imagination and begins to feel as if the possibilities for her future are endless. Filled with Nidhi Chanani's signature vibrant illustrations, What Will My Story Be? is for anyone who finds inspiration in the quiet moments and cherishes the wisdom of the generations that came before them. Perfect for fans of Alma and How She Got Her Name by Juana Martinez-Neal, Drawn Together by Minh Le and Dan Santat, and You Matter by Christian Robinson.
Read more
Previous page
Next page
Fire Tablets
Fire Phones
Free Kindle Reading Apps
Available on these devices

Praise for What Will My Story Be? by Nidhi Chanani:

"Text is lyrical, whimsical, and inspiring, the vision of interweaving individual and collective stories both accessible and heartwarming. The illustrations of the brown-skinned protagonist and racially diverse aunties are gentle and playful. Wisely counsels looking to our past to find our future." --
Kirkus Reviews

"The art is vibrant, whimsical, and sure to draw in readers . . . Chanani has created an ode to the families we choose."  --School Library Journal

Praise and Accolades for Nidhi Chanani:

"Chanani masterfully turns the complex immigrant narrative into a magical and captivating work of art." --The New York Times

"Colorful and deeply personal, Pashmina illuminates the experience of an Indian-American teenager and invites us to contemplate the power of our choices." --Gene Luen Yang, national bestselling author of American Born Chinese

"Pashmina is filled to the brim with magic and heart." --Victoria Jamieson, author of Roller Girl

I Will Be Fierce, written by Bea Birdsong and illustrated by Nidhi Chanani (2019):

"A multicultural girl-power manifesto . . . Birdsong's repeated refrain underlines the unambiguous message of this sassy picture book, and Chanani's bold and energetic illustrations reinforce the text's punchy, feminist-y declarations. . . the book will find repeated use in the classroom." --Kirkus Reviews

"Readers will smile at the charming and clever interplay between the words and pictures, and even younger audiences will understand the subtext: Being fierce means being kind to others and finding joy. The bright, expressive illustrations are full of movement, giving purpose to the girl's adventure." --Booklist

"A simple, empowering tale that encourages children to be the heroes of their own stories. An engaging choice for storytime or one-on-one sharing." --School Library Journal

Nidhi Chanani likes to dream kind and creative dreams. She's the author of the graphic novel Pashmina and the bilingual board book Shubh Raatri Dost/Good Night Friend, as well as the illustrator of the picture book I Will Be Fierce. Nidhi draws and dreams in the San Francisco Bay Area with her husband, child, and cat. Find more of her work at everydayloveart.com. --This text refers to the hardcover edition.

Nidhi Chanani is a freelance illustrator, cartoonist and writer. She is the owner of Everyday Love Art. Born in Calcutta and raised in suburban southern California, Nidhi creates because it makes her happy – with the hope that it can make others happy, too. In April of 2012 she was honored by the Obama Administration as a Champion of Change.

Her debut graphic novel, Pashmina (First Second/Macmillan), released in fall 2017. It received starred reviews in the School Library Journal, Publisher’s Weekly, and was reviewed in the New York Times. Pashmina was a Junior Library Guild selection, Chicago Public Library Best Book of 2017, Texas Maverick Graphic Novel 2017, Northern California Indie Bookseller Association Long-List Title and a YALSA Top Ten Great Graphic Novels for Teens. In March of 2019, the film adaptation of Pashmina with Netflix was announced. Gurinder Chadha (Bend it like Beckham, Blinded by the Light) is set to direct.

Her second original graphic novel, Jukebox, released in June 2021 with a starred review in Booklist and glowing reviews in Kirkus and Publishers Weekly.

In 2018, Jasmine’s New Pet, which she wrote and drew released through Dark Horse Comics. Her bilingual board book, Shubh Raatri Dost/Good Night Friend released in 2019. Her debut picture book, written by Bea Birdsong, I will be fierce, released in April 2019. Her next picture book, Binny’s Diwali, written by Thrity Umrigar, released in September 2020. Kong and Me, written by Kiki Thorpe released in March 2021. Her author/illustrator debut What will my story be? releases in November 2021. She is currently working on her next original graphic novel, Super Boba Cafe as well as unannounced picture books and graphic novels. She is an instructor in the Master of Fine Arts, Comics program at the California College of Arts.

Her media appearances include CNN’s Anderson Cooper 360 and BBC Radio. Her work has been featured on the Huffington Post, the Women’s March, My Modern Met, Bored Panda and India Times. Nidhi has worked with Disney, ABC, Airbnb, Sony, Microsoft, State Farm Insurance and a variety of other clients. Her non-fiction comics have appeared in the Nib. Everyday Love Art products are sold in retail shops across the country, including the San Francisco International Airport, Books Inc., and Therapy stores.

Nidhi draws and dreams every day with her husband, daughter and their cat in the San Francisco Bay Area.