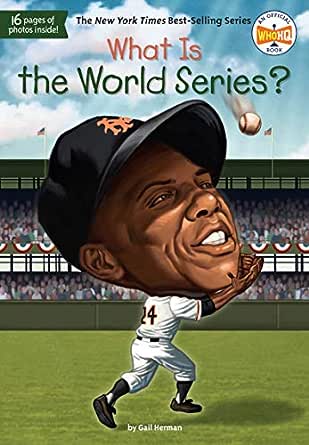 You've subscribed to What Was?! We will preorder your items within 24 hours of when they become available. When new books are released, we'll charge your default payment method for the lowest price available during the pre-order period.
Update your device or payment method, cancel individual pre-orders or your subscription at
Your Memberships & Subscriptions 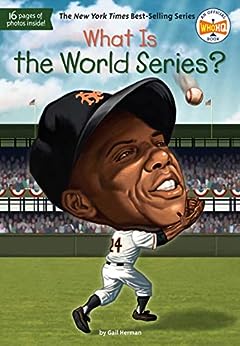 What Is the World Series? (What Was?) Kindle Edition

An Amazon Book with Buzz: "The Patient" by Jasper DeWitt
"The Patient is a fascinating and frightening read that comes at you like the monster under your bed." - Reed Farrel Coleman Learn more
click to open popover
Books In This Series (20 Books)
Page 1 of 1Start OverPage 1 of 1
Previous page
Next page 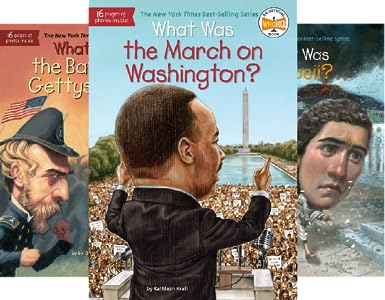 What Was?
Kathleen Krull
Kindle Edition

What Is the World Series?

It was October 1, 1903, and the first World Series game was about to begin. Hours before the game, thousands of fans poured into the Huntington Avenue Baseball Grounds in Boston. They came by foot, by horse and buggy, and by trolley car.

By 2:00 p.m., all nine thousand seats were taken. Seven thousand more fans filed in, sitting on fences and standing behind ropes around the outfield. For this game, admission was double the usual cost: fifty cents for standing room and bleacher seats. One dollar for grandstand seats.

Businessmen, students, factory workers. The rich and the poor. Fans from all backgrounds came—with one exception. African Americans were not welcome in the stands or on the field. (In fact, there would be no black players in Major League Baseball until 1947.)

At 3:00 p.m., an announcer shouted out the lineup through a megaphone. The game pitted the Boston Americans against the Pittsburgh Pirates.

In the first inning, Honus Wagner brought one of his Pirates teammates home with a line-drive single. It was the very first run scored in the very first World Series.

Every October, the temperature drops. Leaves fall. Excitement fills the air for baseball fans. It’s time for the World Series—a once-a-year contest between the best of the Major Leagues—to name a championship team.

But the World Series is more than a competition. It’s an event with a capital E. During those autumn days, it captures the attention of the entire United States. Presidents throw out first pitches. Popular singers belt out the national anthem. In wartime, in peacetime, in good times and bad, the World Series celebrates a game that has become so popular, it is known as the national pastime.

CHAPTER 1
In the Beginning

Since the mid-1800s, the game of baseball has been played pretty much the way we know it today. However, until 1869, there were no professional teams with paid players. The Cincinnati Red Stockings were the first pro team. Others followed, and in time the teams joined leagues, which had rules, schedules, and player contracts.

Gail Herman has written several biographies, including "Who Was Jackie Robinson? " --This text refers to the library edition.

4.9 out of 5 stars
4.9 out of 5
60 customer ratings
How does Amazon calculate star ratings?
Amazon calculates a product’s star ratings based on a machine learned model instead of a raw data average. The model takes into account factors including the age of a rating, whether the ratings are from verified purchasers, and factors that establish reviewer trustworthiness.
Top Reviews

Jamey
4.0 out of 5 stars Great book for 9 yr old, 3rd grader!
Reviewed in the United States on December 13, 2016
Verified Purchase
I bought this book as a gift for my nephew, who is a huge baseball fan. He is 9 years old and in 3rd grade. This is a chapter book and is perfect for his reading level.
Read more
3 people found this helpful
Helpful
Comment Report abuse

CC
4.0 out of 5 stars It's a hit with the 11year old baseball fan!
Reviewed in the United States on September 19, 2015
Verified Purchase
My 11 year old nephew is hooked on these books. Getting children to read anything is great and these books are great from an informative and enjoyable point of view. Lots of info packed in a manageable size book. Lots of facts and tidbits. Nephew is a huge MLB fan so this was even more enjoyable for him.
Great series of books!

Amazon Customer
5.0 out of 5 stars Gave as a gift
Reviewed in the United States on March 31, 2019
Verified Purchase
Like
Read more
Helpful
Comment Report abuse

ewiz
5.0 out of 5 stars Grandkids will love this series
Reviewed in the United States on February 3, 2018
Verified Purchase
Nothing grandson loves better then to get this book series in the mail
Read more
Helpful
Comment Report abuse

W. haisley
5.0 out of 5 stars Five Stars
Reviewed in the United States on August 12, 2017
Verified Purchase
My 9 yr old loved this book. Was able to read it in just a few days.
Read more
Helpful
Comment Report abuse
See all reviews from the United States

El matador
4.0 out of 5 stars Good book
Reviewed in Canada on February 3, 2016
Verified Purchase
We enjoy the who is/ what is series. They are informative.
Read more
Helpful
Sending feedback...
Thank you for your feedback.
Sorry, we failed to record your vote. Please try again
Report abuse