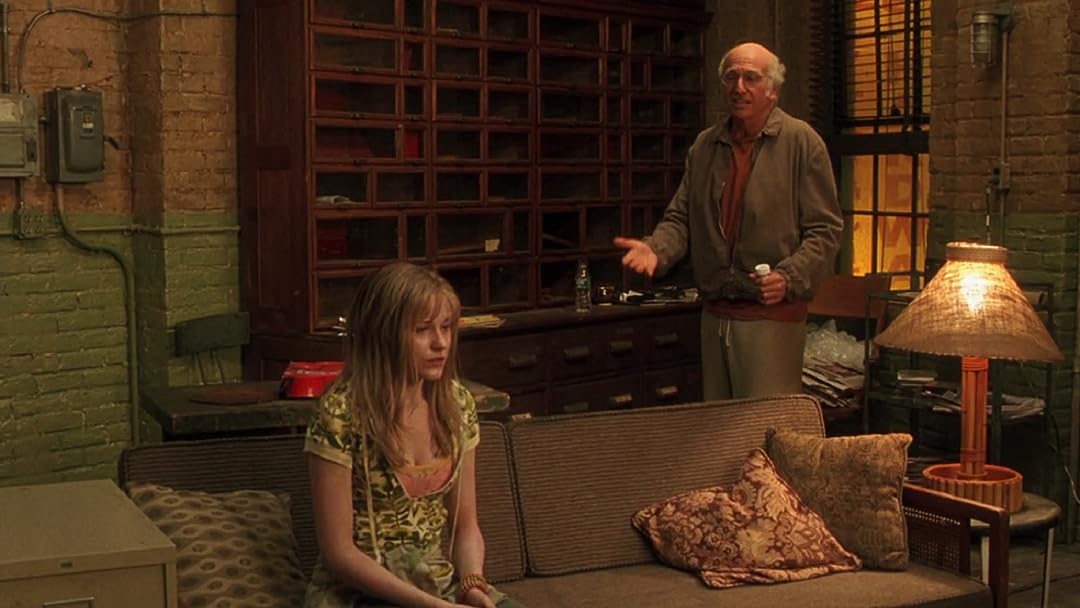 Dave @ Laurel CanyonReviewed in the United States on October 10, 2019
5.0 out of 5 stars
Enjoy the ride...it’s fun,
Verified purchase
It seems that many of the negative reviewers took this movie all to seriously. It is the absurdity of much of what happens in life that is this story’s big picture. I found it incredibly funny and intelligent and Larry David’s performance was stellar. The character Melody, is a delight to watch as she acted as his perfect counter point. OK, I’m a bit biased as I love LD and have watched this movie a half dozen times over the years and every time I laugh my head off. Buy it, and enjoy the ride and don’t take it to seriously.
8 people found this helpful

BruceReviewed in the United States on August 10, 2020
3.0 out of 5 stars
Eh
Verified purchase
Despite my love for Woody Allen, there's just something about this movie that rubs me the wrong way. The whole message seems to saying that those who live in Manhattan are better than everyone else and if they only acted like Manhattanites the world would be a better place. It's ultra-hedonistic.

I get it, it's Woody Allen, but the message is flawed. This perspective only works if you're completely financial secure. It stops working if you're not. People need to make tough sacrifices, because the world is not perfect-

Let me make this analogy. There's an old expression that goes, "We can put a man on the moon but we can't make X work?" The idea being if we can do this one hard thing, this other problem should be relatively easy, and why hasn't it been solved. It's because we spent tons of resources to get to the moon and resources are limited. There are tradeoffs. Life is set of trade offs.

And that's what this movie doesn't take into account. That you might not find the perfect partner, because life is full of tradeoffs.

A. Film LoverReviewed in the United States on December 5, 2020
3.0 out of 5 stars
Woody floundering
Verified purchase
One of my least favorite Woody films. First off, I can't take Larry David for ninety minutes - the voice is like nails on a chalkboard. And then this thing just meanders along and is simply not good enough. Woody goes through phases and one has to admire his tenacity making a film a year, but too many of them from this period are mundane and not interesting, at least not for me. But then again, I don't like much of his output of the last thirty years - occasionally I'll enjoy one and it will remind me of how great his greatest films are. But this isn't one of them, I'm afraid. I rank it right down in the lower depths with Scoop.
2 people found this helpful

The Cat's PajamasReviewed in the United States on February 8, 2020
1.0 out of 5 stars
SORRY I RENTED IT - NOT WORTH $2.99!
Verified purchase
Perverse and sick characters in this movie. I didn't like the "90 year old man and 16 year old get married" story line. Then, the 16 year old's mother was also totally inappropriate. For one, the mother did not act her age at all but rather like a 16 year old herself! To top it off, she ended up being a sexual deviant, taking part in a 3-way that maybe was supposed to be funny. It wasn't. Would not recommend this one.
3 people found this helpful

Paul S. RacicotReviewed in the United States on January 28, 2014
4.0 out of 5 stars
Whatever Works Almost Works
Verified purchase
I like Larry David, and I like Woody Allen's movies. My thought was maybe these two guys could team up and create a synergy that is greater than the sum of the parts. This didn't quite happen. Too much Woody Allen and not enough Larry David for my tastes. I really grew rather tired of the main character (played by Larry) announcing how he was soooo intelligent and everyone else was an "inch worm" or sub-human compared to himself. OK we get it Woody: the character is a genius, so let's move on already - stop it with that constant annoying talk from the genius. Insert the requisite classical music and jazz to inform us how cultured Woody is and we're all sub-humans who can't appreciate the refined tastes of a genius, sprinkle in the reference to the old hag who rains on his parade, and you've got a lame story. The ending was predictable, and nauseatingly cheerful - everyone gets a partner they love and enjoy and live happily ever afterwards. I made myself watch the whole thing because of Larry David (I can't get enough of this guy). Larry tried but couldn't lift this movie out of the humdrums - he needed help from the writing. I'm giving it 4 stars for Larry's presence, and acting ability.
3 people found this helpful

David E. BaldwinReviewed in the United States on March 7, 2014
4.0 out of 5 stars
Where Woody Ends and Larry Begins or Vice Versa
Verified purchase
Woody Allen is unmatched as the East Coast intellectual king of pessimism. He's tried to pass that mantle in his films to other actors like Kenneth Branagh, Will Ferrell, and Owen Wilson to name a few with middling to little success. With this film Larry David not only matches the Woodman in the area of misanthropy but may surpass him. That said, a little of this acidity goes a long way and fortunately this film has Evan Rachel Wood's sweet Mississippi beauty queen to temper the angst. The film takes an unfortunate detour when it introduces about two-third of the way through Wood's fundamentalist Christian parents played by Patricia Clarkson and Ed Begley, Jr. It's here that Allen pontificates his love the one you're with mantra which, when you think about it, may be the root of Allen's current public relations problems. Regardless, this is a slight diversion that Allen completists may embrace and perplex others.
5 people found this helpful

John F. RooneyReviewed in the United States on January 8, 2010
3.0 out of 5 stars
A Lethal Combo: Woody Allen and Larry David
Verified purchase
"Whatever works" has Larry David playing an obnoxious cynic named Boris limping around in this Woody Allen movie. It's a lethal combination because David plays a very negative, cynical, pessimistic, nasty piece of work and add to that the neuroses and whining of the Woody Allen persona, and you've got a lot of movie watchers, turned off by the negativity, looking for the Stop button on their DVD controls. David plays an irritating, opinionated loudmouth who can't shut up. People, to him, are not basically decent. There are stretches when he talks directly to the audience, a device often resorted to when a script is in trouble.
Boris says, "The universe is winding down, why shouldn't we?" David has divorced his wife, is subject to late night panic attacks, and has attempted suicide. He meets a young, attractive homeless girl, Melody, and lets her stay at his place. He says he's a genius, and she's a simple Southern girl who is impressed by his gab though the audience will find it tedious. She wins him over, he falls for her, and they get married.
Her mother, estranged from the girl's father, shows up, and, of course, hates this older man that her daughter has married. Soon the mother goes bananas and becomes a free-loving bohemian. Eventually the father shows up and he, too, goes off the deep end.
As it goes along, David calms down, and the flick has some funny jokes and situations. It's very much a New York movie in the mold of most of Woody's work. His films are for a limited audience, and this one may be for an even more limited audience than usual. A happy ending is tacked on, but it's a quirky one.
Despite its grating, loud beginning, stick with it and it may grow on you. No one other than Boris sees the audience he's talking to, and he says, "I'm the only one who sees the whole picture."
4 people found this helpful
See all reviews
Back to top
Get to Know Us
Make Money with Us
Amazon Payment Products
Let Us Help You
EnglishChoose a language for shopping. United StatesChoose a country/region for shopping.
© 1996-2021, Amazon.com, Inc. or its affiliates