When Penguins Flew and Water Burned and millions of other books are available for Amazon Kindle. Learn more
Share <Embed>
Have one to sell?
Sell on Amazon 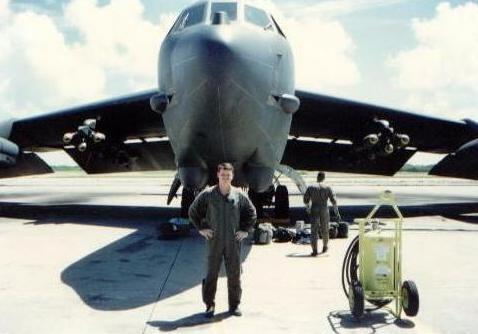 by Jim Clonts (Author)
4.5 out of 5 stars 90 ratings
See all formats and editions
Sorry, there was a problem loading this page. Try again.
This is the true memoir of one US Air Force navigatorÕs journey from the schoolhouses of Air Training Command to the nuclear alerts of the Cold War to combat in a 35-year-old anachronism called the B-52. It is a first-hand account of life during the last days of Strategic Air Command, the early day of Air Combat Command and the ensuing military drawdown of the 1990s. From peacetime training exercises across the globe to combat operations in Desert Storm, Jim Clonts takes the reader inside the cockpit where life and death are seconds apart. Often comical, sometimes heart-pounding, other times tragic, WHEN PENGUINS FLEW AND WATER BURNED takes you into the world of military aviation, a crucible where warriors learn the true nature of character, conscience and mortality.
Read more
Previous page
Next page

Page 1 of 1 Start overPage 1 of 1
Previous page
Next page
Start reading When Penguins Flew and Water Burned on your Kindle in under a minute.

Jim Clonts is a former Instructor Radar Navigator with over 2200 flying hours in the B-52G/H aircraft. Jim flew 10 combat missions over Iraq and Kuwait in Operation Desert Storm and sat nuclear alert in the waning days of the Cold War. He experienced firsthand the transition from Strategic Air Command to Air Combat Command, as well as the transition from the B-52's traditional role of nuclear deterrence to that of conventional warfighter. Jim left the Air Force in 1998 and works in industry as an engineer. In his spare time, when not writing, he flies with the Georgia Wing of the Civil Air Patrol (USAF Auxiliary) and serves as an Aerospace Education Officer.

R. E. Statham
5.0 out of 5 stars One of the best books in my military history library
Reviewed in the United States on March 22, 2015
Verified Purchase
This book came "recommended" by Amazon after I read "We were Crew Dogs" (I and II), so I decided to give it a whirl. What a great book!

It covers a period in history of tremendous military significance, as well as describing in detail a job that few truly understand outside of military aviation circles.

Regarding the book's military significance: The Strategic Air Command and the US Air Force fought a 35-year, toe-to-toe war with the Soviet Union-- and won. Few people understand what they did-- and how they did it. But the guys that crewed the "BUFFs" were playing for keeps. And then some. The B-52 is truly a world-recognized symbol of strategic (high level, and yes, high altitude) American air power. Those of us who grew up in the 60's (or 70's or 80's for that matter) knew what this plane could do- so learning all about it here, from a crewman's perspective, provides a truly significant contribution to a period of American history unknown to most.

I had no idea that these crews were flying low-level-- and I mean LOW LEVEL (500 foot off the ground, 300-450 mph!) flights-- in daytime and in the middle of the night. (I thought the B-52 was a high-altitude nuclear bomber-- shows you what I know.) I had not idea that these same bombers routinely flew missions lasting 16 hours-- or 24 hours-- in other countries, with one, two or three airborne refuelings.

And I not a clue that their navigators were tasked with not only being at the exact spot-- sometimes down in the dirt, sometimes high (in this book, 6-8 miles up was also routine)-- but they were to be ON time. And I mean, exactly on time. Down to the second. After flying for 7 hours and 23 minutes and eighteen seconds.. or six hours and 28 minutes and eleven seconds. No kidding. All this while dodging surface to air missles, staying clear of hostile air space, linking up with tankers, flying with two, three other aircraft.

But Jim Clonts makes it seem easy. Challenging, but manageable.

Some funny moments in this book. VERY funny moments. I won't spoil them here. But I had some times when I had to put the book down because I was laughing out loud, and my wife was giving me a puzzled look. "Good book? she asked. "Oh, yeah" I replied.

I served in a different branch, and had a different job... and at time before Jim Clonts served. But I found myself grinning at his observations of human nature, the miliary system, the Strategic Air Command, different pilots, different crew members, and yes, some of the close calls-- both in training and in combat, including Desert Storm.

I wasn't expecting this fine book to grab me the way it did, but I commend Jim-- who is now a search and rescue pilot in the Civil Air Patrol (as am I). From the moment I started reading chapter one until the last few pages, I found this book to be a real jewel. And I've read some great aviation books.

I am delighted to heartily recommend this book for anyone simply interested in the B-52, or the Air Force-- to those "die hard few" out there (like me) who are always looking for a fresh perspective-- a new story well told.
Read more
2 people found this helpful
Helpful
Report abuse

Narut Ujnat
VINE VOICE
5.0 out of 5 stars Entertaining and very interesting read about the B52 and flying.
Reviewed in the United States on April 1, 2013
Verified Purchase
Those ingenious Amazon logarithims snagged me again and told me about this book as being recommended for me. Darn it, after reading this in few sittings, the recommendation was correct. I enjoyed the heck out of this book.

Clonts, the author, was a navigator aboard a B52 during 1989 - 2000 (?) and provides a very entertaining, and compelling read about life aboard of B52 bomber during training, the Gulf War, and various deployments. Clonts is an excellent writer and surprisingly very polished in telling his stories. The book flows very quickly and provides information that is just impossible to glean from the internet and other sources. I love the descriptions of how cramped it is aboard the airplane during 20 hour plus flights and how limited the equipment actually is. The title of the book is a play on both an old aviator's joke and a feature of the B52 (read the book to figure both out), and it is not difficult to say that life aboard what was a 35 year old airplane is at times scary and other times hilarious.

Clonts is accurate in portraying the world of military aviation as one big Charlie Foxtrot during peacetime and, thankfully, a dependable,lethal, killing machine during threats of war. Wow, I guess the culture is about the same as any other where you have exercises for events that will never hopefully happen and sheer boredom arises inspiring some pranks and other foul-ups on occasion. Of course, these guys potentially are dealing with lighthearted stuff like possibly delivering nuclear payloads. However, the read is about deadly serious business and the book provides the author's insights about how this business is managed. I do find a certain bit of irony in the constant reference to the amazement of how this '35 year old airplane' is able to deliver ordinance to a certain time and place and with precision when the same B52's are STILL flying and are now '50 year old' airplanes doing the same things and are expected to become '80 year old airplanes' before retirement. Wow.

Clonts relates a lot of interesting facts and figures about what it takes to accomplish what no other military in the world can accomplish and does so with a great deal of wit and humor. He is a good writer. And this book makes me amazed and, well, proud of the American military - our protectors. The proud old birds (no fuel dump - seriously?) are flown by some courageous and wonderful people, and thankfully this book gives some insight into that world.
Read more
2 people found this helpful
Helpful
Report abuse
See all reviews

Mr. Mark J. Cassidy
5.0 out of 5 stars A brilliant read
Reviewed in the United Kingdom on November 21, 2020
Verified Purchase
A treat to read from someone very knowledgeable about aviation who flew through some of the most intresting times of the late 20th century.
Read more
Report abuse

SteveB
5.0 out of 5 stars A 'must' for all BUFF addicts!
Reviewed in the United Kingdom on February 2, 2013
Verified Purchase
A lengthy and rather rambling account of the history of this giant aircraft throughout its entire service life. A 'must' for BUFF addicts!
Read more
One person found this helpful
Report abuse

David W. Smith
5.0 out of 5 stars Highly recommended.
Reviewed in Canada on March 9, 2016
Verified Purchase
Great book, nice to see the view from the Guy in Back for a change. Though I don't imagine he had much of a view from the BUFF. Great stories from Desert Storm era. Highly recommend if you have in interest in this subject, probably would be interesting book if you weren't really a huge aviation story fan.
Read more
Report abuse
See all reviews