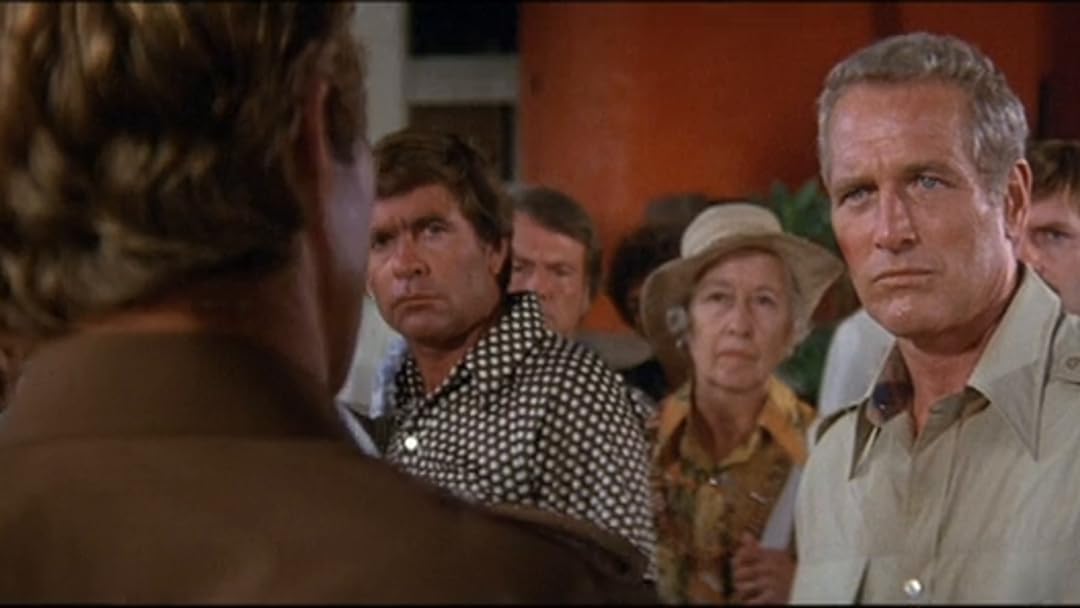 When Time Ran Out

CylbReviewed in the United States on March 29, 2018
4.0 out of 5 stars
Irwin Allen Does A New Disaster....A Volcano!
Verified purchase
This is one of my guilty pleasure movies. After the Towering Inferno, Irwin Allen did this movie with Paul Newman and William Holden but as different characters. They are now on a tropical island where an active volcano explodes. James Franciscus runs the luxury hotel that Holden owns. As the volcano spews lava rocks at the hotel, Franciscus convinces the guests they are safe???? Newman and Holden lead a few guests on a dangerous trek to the other side of the island. It is hokey but fun.
14 people found this helpful

M.BresfordReviewed in the United States on July 19, 2019
2.0 out of 5 stars
Not the version I remember.
Verified purchase
I regret using my digital credits to own this movie. I originally saw it on TV and it was mostly (ok, entirely) out of nostalgia that I bought it. However, this was not the as the broadcast version and some key scenes were cut. Now those scenes wouldn't have saved the movie, but they gave some of the characters a little more meat to their story. Paul Newman is on the short list of actors who are interesting to watch even if they're surrounded by a subpar movie.
7 people found this helpful

EinsatzReviewed in the United States on June 30, 2016
4.0 out of 5 stars
"That volcano movie!"
Verified purchase
Interesting, I must have originally seen one of the longer versions (either the 141 minute version that was padded for television and called Earth’s Final Fury or the 121 minute theatrical version). At a slim 109 minutes, obviously a lot was cut out. Since they don’t charge DVDs by the minute, one wonders why they sliced this baloney so thin. In this version they left out the subplot of Edward Albert (Brian) being James Franciscus’ (Bob Spangler) illegitimate younger half brother and part-owner of the resort. Spangler keeps this secret to himself. Poor Brian ends up just another employee, the general manager, and his fringe benefit (fiancée Lolani) is playing hanky-panky with his older brother of a different mother. They cut out all the good parts!!!
Be that as it may, this is still a fun piece of absolute crap. A total bomb when it hit the theaters, forcing Irvin Allen to give up on theatrical releases from then on, sticking to television instead. When interviewed later, if he regretted making any film, Newman said “that volcano movie!” Fortunately, he was well paid for his part in this travesty. As for poor William Holden, he was miffed when forced to take second billing to Newman on two Irwin Allen flicks in a row (first The Towering Inferno, now this!).
10 people found this helpful

RocketeerReviewed in the United States on July 1, 2021
3.0 out of 5 stars
Standard disaster movie
Verified purchase
This follows the standard disaster movie template: An opening in which evil portents appear, followed by a lot of dull filler, followed by the exciting destruction.
Unfortunately, in this movie the dull filler is really dull and the C-list actors (except Paul Newman, who must've needed to pay the rent or something) lack charm.
And then, after you've suffered through the filler, the destruction is poorly done. A late-movie sequence when a small band needs to cross a lava flow on a disintegrating bridge is especially disappointing; a good director, like Spielberg, could've made it really exciting, but James Goldstone just doesn't have the talent.

Herb ArnoldReviewed in the United States on February 12, 2017
3.0 out of 5 stars
Irwin Allen's Last Disaster Film Epic
Verified purchase
"When Time Ran Out" does not have the big budget look of "The Poseidon Advance" or "The Towering Inferno", but it does provide just as many stars in what may have been producer Irwin Allen's last disaster epic. Even Allen's wife , Sheila Matthews, gets a larger role this time around. This one is about a volcano threatening an island resort and town with many characters that mirror Allen's other films. Things keep interesting as Paul Newman tried to lead the sensible part of the group to safety. The volcano itself looks like it was made in a chemistry lab, but it was interesting and fun escapism in you enjoy this genre.
7 people found this helpful

KatReviewed in the United States on February 13, 2021
3.0 out of 5 stars
Long shipping wait
Verified purchase
Took forever to arrive, months. When it did arrive, I watched it right away. The copy plays smoothly. But I believe there are some scenes missing. Will have to rewatch to actually time it, but pretty certain there are a few smaller scenes that were not on this dvd. The cover looks like a replication ... but. Cannot be certain. But the rating is fair given how long it took.
One person found this helpful

Irene RodgersReviewed in the United States on April 25, 2021
5.0 out of 5 stars
A little dated, but still a great movie.
Verified purchase
I had seen this movie years ago at the theater with my husband, and we both enjoyed it. For some reason, it popped into my memory and I decided to order it and see if it was still as good as I remembered.
I sat down and watched this "escape from the volcano" movie complete with stars: Paul Newman (at his most handsome), William Holden, Red Buttons, Edward Albert, etc. Beautiful scenery, lots of special effects which would be more effective with the latest film gadgets, but still were pretty cool. I enjoyed it enough to watch it again the next evening and will probably see it again some time.
3 people found this helpful

Cathy ScottReviewed in the United States on March 20, 2022
4.0 out of 5 stars
They should have left.
Verified purchase
What can I say? Some people just don't listen 👂. A hotel built that close to a volcano, people. Did they actually think they were safe!? And the builder's wife, she died alone because her husband was in the arms of another woman, for crying out loud! Like I said, they should have left.
See all reviews
Back to top
Get to Know Us
Make Money with Us
Amazon Payment Products
Let Us Help You
EnglishChoose a language for shopping. United StatesChoose a country/region for shopping.
© 1996-2022, Amazon.com, Inc. or its affiliates