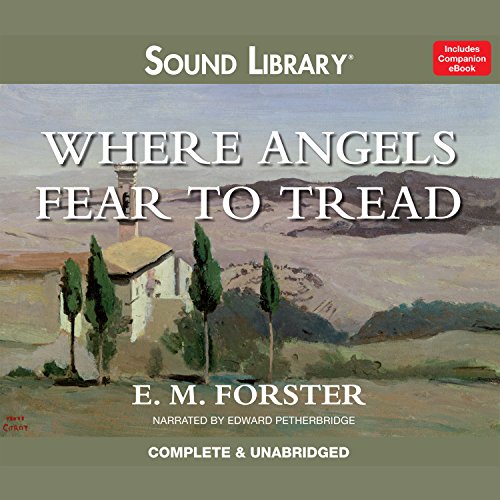 Where Angels Fear to Tread

List Price: $21.95
You Save: $8.96 (41%)
By completing your purchase, you agree to Audible’s Conditions Of Use
Sold and delivered by Audible, an Amazon company
Share

4.2 out of 5 stars
4.2 out of 5
47 global ratings
How are ratings calculated?
To calculate the overall star rating and percentage breakdown by star, we don’t use a simple average. Instead, our system considers things like how recent a review is and if the reviewer bought the item on Amazon. It also analyzes reviews to verify trustworthiness.
Top reviews

There are 0 reviews and 2 ratings from the United States

Janie U
4.0 out of 5 stars Interesting example of the time and enjoyable read
Reviewed in the United Kingdom on July 4, 2017
Verified Purchase
This is a small novel of just over 150 pages, split into 10 chapters and it's really easy to read. I have been given this book to read as part of a literature appreciation course - I read Room With A View many years ago but remember little of it and had not heard of this novel.
The writing is brilliant from the start. It's very funny and the characters are compelling. Every sentence seems to contain some witticism - this is a novel which needs to be read slowly in order to catch everything.
It is a short novel and the plot is straightforward - lots happens in such a few pages and it has to be straightforward. Forster clearly sets out back stories, relationships and potential for conflict.
The plot takes the form of a farce with the characters rushing about without thinking of consequence - everything happens quickly with people and actions being exaggerated for comic effect. There are several elements of the plot which are simply preposterous and made me gasp!
I found the book very implausible but understood that he was playing with stereotypes of the times. Once used to that then the book becomes quite sensitive as the characters are drawn to their fates.
Read more
8 people found this helpful
Report abuse

SusannahB
4.0 out of 5 stars (3.5 Stars) Fools Rush In Where Angels Fear to Tread
Reviewed in the United Kingdom on February 20, 2020
Verified Purchase
Lilia Herriton, a young, comfortably-off widow, leaves her small daughter in the care of her mother-in-law, and travels to Italy accompanied by Caroline Abbott, an attractive and sensible young woman and a friend of the Herriton family. In Italy, seduced by the sights and the romanticism she finds there, the impulsive Lilia embarks upon a relationship with Gino, a very handsome but unsuitable younger man she meets by chance and, to the horror of the Herriton family, she becomes engaged to him. Cue Philip Herriton, her young, unmarried brother-in-law, who rushes out to Italy at the behest of his mother - who, very conscious of her social standing, insists that Philip prevents the marriage taking place; however, we soon see Philip back in England having failed in his mission. Some time later, Philip finds himself back in Italy accompanied by his difficult, snobbish sister, Harriet, on yet another mission for the Herriton family, but he and Harriet are surprised to discover that Caroline Abbott, still emotionally upset by her involvement in the relationship between Lilia and Gino, has come to Italy too. But why is Caroline in Italy? And is she on the side of the Herriton family, or against them?

This slim novel was E M Forster’s first novel to be published and, as a debut, it is a good one; however, as a first novel it does have its small flaws and one does have the feeling that the author is fathoming out his own style. That said, parts of this story are rather engaging, other parts quite amusing and the characters, albeit some of them rather stereotypical (and, quite possibly, intentionally so), are all of them interesting to read about - especially when the author puts Philip and Caroline into situations that require them to examine their own motivations and personalities and, indeed, their own lives, and I wish this had been further expanded on. Overall, I enjoyed this novel, not as much as E M Forster’s later books it it true, but it was certainly worth reading and reading this has made me want to revisit his third novel ‘A Room with a View’ where the author returns to Italy with a more involving story and with more rounded characters.

Amazon Customer
4.0 out of 5 stars and l wasn't disappointed. After reading so many Hardy books I was ...
Reviewed in the United Kingdom on December 1, 2016
Verified Purchase
My first EFM book,and l wasn't disappointed.After reading so many Hardy books I was surprised to read more tragedy,but it was so unpredictable.The book was seeped,intentionally perhaps,in the snobbery and predudice of a well placed ,wealthy English family.Italian culture,rural and a complete contrast,met this alien attitude and in a way won ,but at what a price.A clever author who will test my so ordinary brain.
Read more
3 people found this helpful
Report abuse

Paul Wilson
5.0 out of 5 stars A great novel
Reviewed in the United Kingdom on July 23, 2019
Verified Purchase
An excellent novel that is as readable as many modern day thrillers.
Read more
One person found this helpful
Report abuse

Sue Alexander
5.0 out of 5 stars Reliable seller
Reviewed in the United Kingdom on October 5, 2020
Verified Purchase
Favourite classic novel, came on time, product as described, happy to do business again
Read more
Report abuse
See all reviews
Back to top
Get to Know Us
Make Money with Us
Amazon Payment Products
Let Us Help You
EnglishChoose a language for shopping. United StatesChoose a country/region for shopping.
© 1996-2021, Amazon.com, Inc. or its affiliates