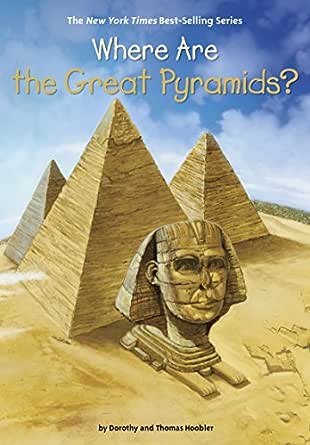 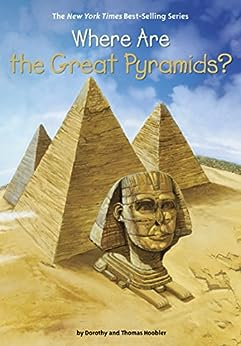 Where Are the Great Pyramids? (Where Is?) Kindle Edition

Where Are the Great Pyramids?

The Great Pyramids of Egypt are the most famous buildings in the world. They stand outside Cairo, the capital and biggest city in Egypt. Almost everybody has seen a picture of them. They are also among the world’s largest buildings, the oldest buildings still standing, and the most closely studied buildings. In ancient times, they were one of the Seven Wonders of the World.

Today, all of those wonders have disappeared—except the pyramids.

The pyramids were not built for people to live in. They were tombs for the pharaohs, the rulers of Egypt. Pharaohs were the link between the Egyptian people and their gods. In fact, the pharaohs themselves were regarded as gods. Whatever the pharaohs wished people to do, it was done. Thus, when pharaohs commanded thousands of people to work for many years to build their tombs, they did it.

There are more than one hundred pyramids still standing in Egypt. But many of them are little more than heaps of rubble. The three largest are known as the Great Pyramids. The oldest of the three was built about 4,500 years ago.

The ancient Egyptians believed the pharaoh would live in another world after death. That’s why it was important to preserve his body and place it somewhere safe—like inside a pyramid.

In an elaborate process, the body was turned into a mummy. It was dried, preserved, and wrapped in linen bands before being placed in a sarcophagus, or coffin. The pharaoh’s servants put food, jewelry, furniture, and many treasures in the pyramid with him.

The pharaohs wanted to make sure their tombs were not disturbed. So the pyramid builders carefully hid the passages that led to the pharaoh’s burial chamber. They set traps for anyone who tried to break in. Even so, tomb robbers managed to get inside and steal treasures.

Over the centuries, Egypt declined. But the Great Pyramids remained. When later visitors arrived, they were astonished by what they saw. No one had seen anything like the pyramids. A Greek known as Herodotus arrived in Egypt in the fifth century BC. The pyramids were already thousands of years old then. Like so many others, he asked, “Who could have built these pyramids? How did they do it?”

Today, scientists still seeking the answers to such questions. We know more about Egypt than Herodotus did, yet unsolved mysteries remain. Today’s scientists are making new discoveries, but the pyramids still hold many secrets.

Dorothy and Thomas Hoobler have written many books for children and young adults, including the American Family Album series. Their YA mystery, In Darkness, Death, won the Edgar Award. --This text refers to the library edition.

4.9 out of 5 stars
4.9 out of 5
95 customer ratings
How does Amazon calculate star ratings?
Amazon calculates a product’s star ratings based on a machine learned model instead of a raw data average. The model takes into account factors including the age of a rating, whether the ratings are from verified purchasers, and factors that establish reviewer trustworthiness.
Top Reviews

Sibele
5.0 out of 5 stars Great book
Reviewed in the United States on June 6, 2020
Verified Purchase
The book was very interesting. It talked about the pharaohs and their lifestyle and when they died there was a process of how they mummified the body. They removed all the organs except the heart they put oils to make it not decay and the organs they dried it and put them in containers. And then they put the cloth to seal the body. The pyramids were the biggest monument until the Eiffel tower was built. Many other pyramids were built there was one in Guatemala and the others in Mexico. But the ones in Egypt were built with 2 and a half ton blocks and was built with multiple people. And the pharaohs were buried in the pyramids
Read more
Helpful
Comment Report abuse

Tinsa Gaines
5.0 out of 5 stars Love these books!
Reviewed in the United States on April 15, 2020
Verified Purchase
Ive bought several books from this series for my son who is in 4th grade and we love them. They have lots of pictures and are easy to read several chapters and not loose his attention.
Read more
One person found this helpful
Helpful
Comment Report abuse

Laurie A. Kendall
5.0 out of 5 stars Do you want to know about the Pyramids?
Reviewed in the United States on August 7, 2020
Verified Purchase
This is geared to younger readers but, at any age, if you want to learn about the Pyramids this is the perfect book to start. It’s easy to comprehend and has great pictures. I really like it.
Read more
Helpful
Comment Report abuse

H. Koenig
5.0 out of 5 stars These books are so cool!
Reviewed in the United States on July 11, 2020
Verified Purchase
My grands (and I) will certainly be pleased with these little books when we use them in homeschool this year!
Read more
Helpful
Comment Report abuse

Sally Penna
5.0 out of 5 stars Egyptian Hit
Reviewed in the United States on May 2, 2017
Verified Purchase
I bought this for my 10 year old niece who is interested in the history of Egypt. She loves it.
Read more
2 people found this helpful
Helpful
Comment Report abuse