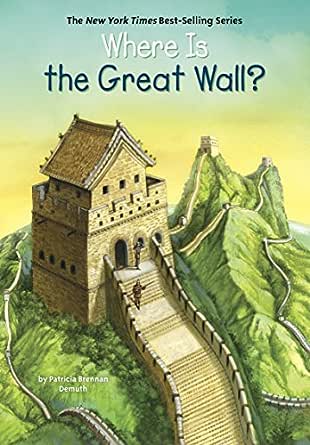 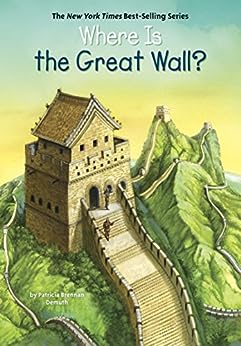 Where Is the Great Wall? (Where Is?) Kindle Edition

Gr 3–5—These solid though formulaic titles profile well-known locations. Demuth examines the longest human-made structure in the world, the Great Wall of China, outlining why it was constructed; Chinese rulers and tribes such as the Mongols, who invaded the empire; the intense manpower required to build the Wall in a time before machines and earth-moving equipment; the people who lived at and protected the Wall; and the Communist Party's actions to preserve the Great Wall and promote it to the world. O'Connor focuses on the Grand Canyon, examining its geological formations; the importance of the Colorado River; the native peoples who used to—and still do—inhabit the canyon; the adventures of geologist John Wesley Powell, who explored the canyon; wildlife; and the impact of man. Stine provides a history of the White House, explaining its design and remodelings; destruction by the British during the War of 1812; descriptions of various rooms including the East Room and the Blue Room; presidents and family members who have occupied the residence; and the staff of chefs, butlers, and more who keep the house running. VERDICT Suitable additions to history and geography collections.—Patricia Ann Owens, formerly with Illinois Eastern Community Colls., Mt. Carmel --This text refers to the paperback edition.

Where Is the Great Wall?


More than two thousand years ago, the emperor of China had workers start building a wall. It was a wall like no other on earth—then or now. It has earned its name: the Great Wall. It is the largest structure that humans have ever made!

It is impossible to give its exact length. That’s because the Great Wall wasn’t built at one time. It’s a series of walls constructed over two thousand years, starting in ancient times. Emperors built new walls and linked them to old ones. Some walls decayed and fell apart. But the last Great Wall, built from about 1400 to 1600, still stands. It stretches in an unbroken line four thousand miles across China’s northern border. If placed in North America, the main wall would reach from the tip of Florida to the North Pole.

There are also side walls that reach down into China to protect and enclose important places. Altogether, estimates of the Great Wall’s length range from about six thousand miles to over ten thousand miles. By any measure, it’s huge!

Many compare the Great Wall to a dragon, a symbol of power and strength in China. The head of the wall starts about sixty-six feet offshore, in the Pacific Ocean on China’s east coast. Then it twists and turns through the land—skirting rivers, crossing grasslands and plains, climbing steep mountains, and plunging down cliffs. Finally it ends in the harsh, dry desert on China’s western end.

This amazing feat of engineering was handmade! There were no machines or power tools to help builders—no forklifts, tractors, drills, or cement mixers. There were just human hands using tools made of stone, iron, and wood. The wall ended up taking a terrible human toll. It is believed that a million Chinese died while building it.

Today the Great Wall awes visitors from all over the world. The story of China itself is told in its bricks, dirt, and stone.


Chapter 1: A Reason for Walls


It’s been said that China is a land of walls within walls within walls. The ancient Chinese wanted something big and solid to keep out their enemies. So they built walls around their houses, temples, and cities. Wall building is as ancient as China itself. Almost.

Long before the first walls were built, China was a land of nomads. The earliest people roamed from place to place hunting game. Then, about six thousand years ago, the Chinese began to farm. They built homes, tamed animals, and planted crops. Their land was perfect for agriculture. Rich soil filled its plains. Plenty of rain fell. And three giant rivers—the Wei, Yangtze, and Huang He—drained the land.

Farming led to a settled way of life. Fathers worked the same small plots of land all their lives, then passed the land to their sons. Set routines were followed year after year. Farmers planted in the spring and tilled in the summer. In the fall, they stored large amounts of grain to last them through cold winters.

With plenty to eat and safe shelter, the Chinese thrived. Their culture became highly advanced—way ahead of other countries. A written language was developed in China as early as 2200 BC. Learned men started to write China’s history on bamboo scrolls and stone. Meanwhile other lands still relied on oral storytelling.

Artists created beautiful paintings. Craftsmen made statues and containers out of polished bronze. Wise men, such as Confucius, set down their teachings. And women wove soft silk cloth. In time, Chinese silks would be prized around the world.

Life flowed smoothly in ancient China—except for enemy attacks from the north. Tribes on horseback roamed the vast grasslands north of China, called the steppe. They were fearsome warriors. The people of China called the tribes by just one name: barbarians!

Though the barbarians were neighbors with the Chinese, they couldn’t have been more different. They lived in round tents called yurts. In place of silks, they wore animal skins. The nomads, who couldn’t read or write, drank horse milk and ate cheese, things the Chinese looked down on.

Land on the steppe was much too dry for farming. So the nomads hunted the wild animals that grazed on the grass. They also raised large herds of goats and sheep. When grass grew thin in one place, they packed up their few belongings and moved to the next.

The key to the nomads’ way of life was the horse. Indeed, they were the first people in the world to tame horses. Steppe children rode horseback almost as soon as they could walk.

The nomads looked with envy at their wealthy neighbors to the south. China had plenty of grain and metal—things that didn’t exist on the steppe. The Chinese refused to trade with barbarians. So the nomads stole what they needed instead. In the fall, when the harvest was at its peak, warriors armed with bows and arrows swept down into China. Sometimes small bands of armies raided. Other times, it was just a few hungry horsemen.

Their power lay in surprise attacks—hit and run. Horsemen stormed into farms and villages, shooting with deadly aim while galloping at full speed. They took whatever they could get. Then, in a flash, they disappeared back to the steppe. They left behind ruined villages and many dead.

How could the Chinese protect themselves? Conquering the nomads was impossible. There were too many small tribes. They were scattered all over the steppe and always on the move. The Chinese fell upon a simple answer: they would build walls.

Patricia Brennan Demuth is the author of "What Was Ellis Island?," "What Was Pearl Harbor?," "Who Was Laura Ingalls Wilder?," and "Who Is Bill Gates?" --This text refers to the library edition.
Read more

4.8 out of 5 stars
4.8 out of 5
103 customer ratings
How does Amazon calculate star ratings?
Amazon calculates a product’s star ratings based on a machine learned model instead of a raw data average. The model takes into account factors including the age of a rating, whether the ratings are from verified purchasers, and factors that establish reviewer trustworthiness.
Top reviews

Pam Britton
5.0 out of 5 stars Great addition to the Classroom!
Reviewed in the United States on October 31, 2019
Verified Purchase
Purchased for my granddaughter who is a new elementary teacher. She loves it!
Read more
One person found this helpful
Helpful
Comment Report abuse

LYNNKS
5.0 out of 5 stars Who is Series?
Reviewed in the United States on January 20, 2018
Verified Purchase
My 8 year old is really onto this series right now so grandparents purchased a lot of them for her birthday. She's read quite a few of them already and we have enjoyed hearing her "teach" us the new information.
Read more
One person found this helpful
Helpful
Comment Report abuse

Jean
5.0 out of 5 stars Five Stars
Reviewed in the United States on July 30, 2017
Verified Purchase
Great read for any age as it is very informative.
Read more
3 people found this helpful
Helpful
Comment Report abuse

Diane Keys
5.0 out of 5 stars Buy them all......this entire series is fabulous, and this one is not exception.
Reviewed in the United States on July 1, 2018
Verified Purchase
Another great piece of history to add to your library!
Read more
Helpful
Comment Report abuse

RS
5.0 out of 5 stars Five Stars
Reviewed in the United States on August 17, 2015
Verified Purchase
I used this to tell my six year old about my recent trip. I learned a lot as well.
Read more
2 people found this helpful
Helpful
Comment Report abuse

JG
5.0 out of 5 stars Five Stars
Reviewed in the United States on January 10, 2016
Verified Purchase
Great for kids
Read more
One person found this helpful
Helpful
Comment Report abuse
See all reviews from the United States

wanaz
5.0 out of 5 stars Great book! Provide knowledge for us!
Reviewed in Japan on June 9, 2018
Verified Purchase
I buy many series of this to gain more knowledge for my nephew. I think it is worth it.
Read more
Helpful
Sending feedback...
Thank you for your feedback.
Sorry, we failed to record your vote. Please try again
Report abuse