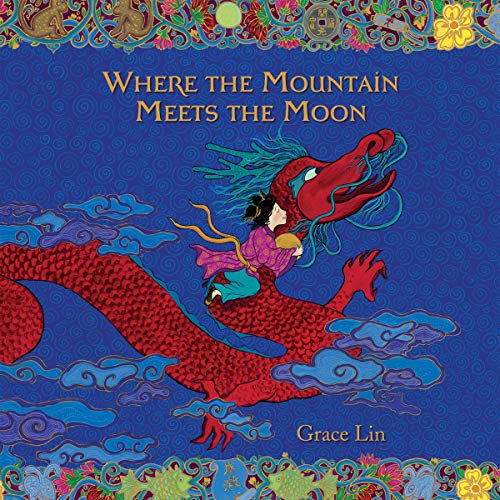 Where the Mountain Meets the Moon

List Price: $28.50
You Save: $3.56 (12%)
By completing your purchase, you agree to Audible’s Conditions Of Use
Sold and delivered by Audible, an Amazon company
Share

4.8 out of 5 stars
4.8 out of 5
2,503 global ratings
How are ratings calculated?
To calculate the overall star rating and percentage breakdown by star, we don’t use a simple average. Instead, our system considers things like how recent a review is and if the reviewer bought the item on Amazon. It also analyzes reviews to verify trustworthiness.

Rachel Rainbolt
5.0 out of 5 stars It looked boring. And old
Reviewed in the United States on May 13, 2018
Verified Purchase
We almost didn’t read this book. It looked boring. And old. And maybe I’m racist and sexist (I’m totally not). After reading hundreds of books together as a family with 3 little boys I literally judged this book by it’s cover and found it lacking a boy with a wand. But it was our last book for book club so we decided to just get through it and make the best of however it shook out. There is learning value in every experience, right?

It is one of our favorite books of all time. The way the author weaves stories together through time and characters is masterful. The theme of choosing happiness through gratitude is one that resonated with all of us so deeply. This book really affected our core while always feeling natural and self discovered.

The discussion questions at the end were perfect and we especially enjoyed the personal section where the author described her process for evolving this story from traditional Chinese stories to her first hand experience traveling to China to her own cultural identity to what it became: Where the Mountain Meets the Moon – we were fascinated by every word.

An earlier paragraph describes the village as:
"a shade of faded brown. This was because the land around the village was hard and poor. To coax rice out of the stubborn land, the fields had to be flooded with water. The villagers had to tramp in the mud, bending and stooping and planting day after day. Working in the mud so much made it spread everywhere and the hot sun dried it onto their clothes and hair and homes. Over time, everything in the village had become the dull color of dried mud."

I hope this will help clarify those who had concerns after reading the negative reviews and wanted to know more.
Read more
23 people found this helpful
Helpful
Report abuse

Digital Rights
5.0 out of 5 stars One Book One School - great choice!
Reviewed in the United States on March 27, 2019
Verified Purchase
We recently had this book for our K-8 school One Book One School. It could not have been a better choice. It's a wonderful story that weaves in lessons of courage, kindness and love. It has characters that are interestingly rebellious and a bit of magic and mystery.

Grace Lin's story has both an large ark and then small somewhat updated adaptations of Chinese fairy tales. It's a wondrous mix.

Minli is a heroic and sweet young girl who wants to change the fortune for her parents. She goes on an amazing journey through kingdoms and forests meeting all the types of people and animals and adventures that I personally would love to join.

The ending is beautifully done. The story seems to accelerate to the last page. My children from ages 6 to 11 loved it. We will read her other stories. Well recommended for families that enjoy reading together.
Read more
27 people found this helpful
Helpful
Report abuse

Kate Calina
5.0 out of 5 stars Timeless Wisdom
Reviewed in the United States on July 16, 2017
Verified Purchase
Young Minli was gifted with a lively spirit that flashed brightly in her drab little village. In planting season she rose before dawn, working beside her parents to place each seedling carefully in the mud. No matter how hard the three worked, they only just managed to get by, living on rice and hoping for better days. Year in and year out, Ma’s unhappy sighs clouded the air. Her daughter resolved to seek better fortune by finding the one soul known for his ability to answer any question: the Old Man of the Moon.

Near a river of salty water, greedy monkeys defended a peach orchard they had just discovered. As Minli approached the rolling stream, a muffled voice broke through the warm clear water. To her astonishment, a brilliant red dragon called out for aid, bound tightly in twine. He had been attacked by the monkeys, who feared his inroads into their orchard. Freed from his bonds, the wingless dragon invited her to climb on his back. He would help her find the Never-Ending Mountain.

Their journey to the Mountain and the Old Man of the Moon brought them to the City of Bright Moonlight, with its clever King and faithful Guardians. In the Inner City, the leaves of the plum trees shone like emeralds. Bamboo and pine trees sparkled like jewels in the sun. Minli and her dragon received two treasures of infinite worth. Joyfully they headed out from the blessed city, clambering over steep and rocky ground. In the wilderness the two heroes were attacked by the brutal Green Tiger, whose poisonous claws brought death to his victims.

Minli’s quick wits had seen her through many perilous adventures. Alone in the wasteland, these gifts alone could not save them. The story that follows is a wonderful tapestry of friendship, generosity and deep courage. Beautifully written, Where the Mountain Meets the Moon is a graceful and powerful tale.

genevabound
5.0 out of 5 stars Real novel, really engaging
Reviewed in the United States on July 21, 2020
Verified Purchase
My daughter loved reading. In second grade, reading Harry Potter. Then she picked up the Wimpy Kid series. Hate those. Snarky, minimal actual reading. Had to get her back to real books. Came across the reviews for these and bought the set for her birthday. It took some prodding but once she picked it up and started, she could not put it down. Read it at the breakfast table, read it in the car, before bed. She kept saying how wonderful the story was.
Yay!
Read more
12 people found this helpful
Helpful
Report abuse

S. C. Reh
5.0 out of 5 stars It doesn't get much better than this
Reviewed in the United States on January 6, 2018
Verified Purchase
I just read this book again yesterday, because my daughter borrowed When the Sea Turned to Silver from the library, and I figured out pretty quickly that it would be better if I refreshed my memory on Where the Mountain Meets the Moon first. Both books are great, of course. This first novel was particularly enjoyable. It is so well-written; even the sentences that don't appear to be critical to the story are carefully crafted. The characters, whether human or not, come alive in the story and in the stories within the story. I love how all 3 books (including Starry River of the Sky) are woven together. There are many positive life lessons throughout. Definitely one of my very favorite children's books, and even among my very favorite fiction books.
Read more
22 people found this helpful
Helpful
Report abuse
See all reviews

Gavin Hetherington
5.0 out of 5 stars A Beautiful Middle Grade!
Reviewed in the United Kingdom on August 25, 2020
Verified Purchase
This... this is one of the most beautiful middle grade books I have ever read.

Minli lives in the Valley of the Fruitless Mountain with her very poor parents. Her father tells her stories about the Jade Dragon and the Old Man of the Moon, filling her head with ideas of how they could possibly change their family fortune. One day, Minli discovers the way to the Old Man of the Moon and decides to leave her parents to see if she can find him. On the way, she meets a dragon that can't fly, kings, tigers, and so much more.

Oh where do I begin with what I loved about this book? This is imbued with gorgeously-told Chinese folktales that are both original and inspired by actual Chinese folktales the author, Grace Lin, has heard over the years. They're so wonderfully integrated in the story and provides a sort of path for Minli, our protagonist.

The characters in this are so full of wonder. Minli is a fantastic character to follow because she's curious and learns so much on her adventure to the Old Man in the Moon. The dragon that can't fly who accompanies her, called Dragon, adds another fantastical element to this story as we meet monkeys and kings and buffalo boys and lucky twins and green tigers, oh my!

I was floored by the emotion and passion behind these stories and characters and all the messages and morals that are learned are so beautiful, when I reached the end, I wanted to begin again on page one so I could learn all those lessons all over again. It took 11 years to discover this book but I'm so glad my red thread finally led me to this wonderful, wonderful book!
Read more
2 people found this helpful
Report abuse

Grace Lin gave me everything I could want: beautiful writing, lovable characters, captivating storytelling, exquisite world building and those warm fuzzy feelings special books give you. (You know the ones you end up hugging. Don’t pretend it’s only me that does that…)

While I’m convinced that Where The Mountain Meets The Moon would be just as thrilling as a text only book I do think that the art, both the chapter heading and the full colour pictures add something extra special.

I loved the folktales within Minli’s own story, there were a few I had heard before, Grace Lin makes them work together so well. I also loved the message I took from the book and all the other things I’ve previously mentioned.

In short I loved Where The Mountain Meets The Moon.
Read more
5 people found this helpful
Report abuse

Bookgeek23
5.0 out of 5 stars Beautifully written
Reviewed in the United Kingdom on May 23, 2020
Verified Purchase
This book was by far one of my favourite middle grades the weaving of folklore and the story was fantastic. I adored the illustrations. I am afraid to say this was my first read from this author I do not think it shall be my last.
Read more
Report abuse

eager reader
5.0 out of 5 stars She is an amazing find
Reviewed in the United Kingdom on November 16, 2020
Verified Purchase
I am now hooked on this author. Wonderful description, beautiful stories and a moral wound through them Perfect
Read more
Report abuse

Bea K Go
5.0 out of 5 stars Captivating, beautiful, a real joy!
Reviewed in the United Kingdom on May 3, 2021
Verified Purchase
Just so beautiful. Read it with my young daughter who enjoyed it so much. Wonderful stories within the main story, heartfelt characters, captivating illustrations. We loved it, would recommend!
Read more
Report abuse
See all reviews
Back to top
Get to Know Us
Make Money with Us
Amazon Payment Products
Let Us Help You
EnglishChoose a language for shopping. United StatesChoose a country/region for shopping.
© 1996-2021, Amazon.com, Inc. or its affiliates