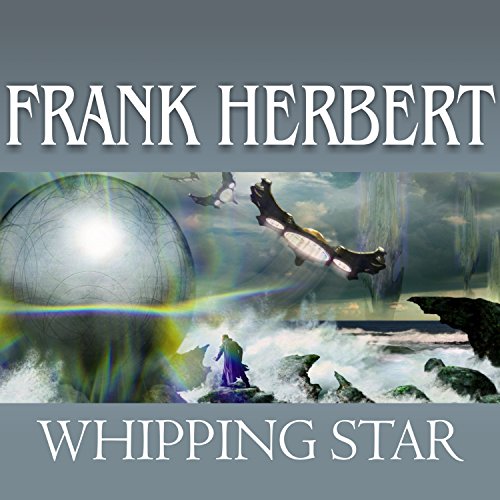 Frank Herbert (Author), Scott Brick (Narrator), Tantor Audio (Publisher) & 0 more
4.3 out of 5 stars 134 ratings
See all formats and editions
Sorry, there was a problem loading this page. Try again.
In the far future, humankind has made contact with numerous other species - Gowachin, Laclac, Wreaves, Pan Spechi, Taprisiots, and Caleban (among others) - and has helped to form the ConSentiency to govern between the species. After suffering under a tyrannous pure democracy that had the power to create laws so fast that no thought could be given to the effects, the sentients of the galaxy found a need for the Bureau of Sabotage (BuSab) to slow the wheels of government, thereby preventing it from legislating recklessly.

In Whipping Star, Jorj X. McKie, a "Saboteur Extraordinary," is a born troublemaker who has naturally become one of BuSab's best agents. As the novel opens, it is revealed that Calebans, who are beings visible to other sentient species as stars, have been disappearing one by one. Each disappearance is accompanied by millions of sentient deaths and instances of incurable insanity.

Ninety years prior to the setting of Whipping Star, the Calebans appeared and offered jump-doors to the collective species, allowing sentients to travel instantly to any point in the universe. Gratefully accepting, the sentiency didn't question the consequences. Now Mliss Abnethe, a psychotic human female with immense power and wealth, has bound a Caleban in a contract that allows the Caleban to be whipped to death; when the Caleban dies, everyone who has ever used a jump-door (which is almost every adult in the sentient world and many of the young) will die as well.

jmenzel2004rok
5.0 out of 5 stars it's a really fun book to read
Reviewed in the United States 🇺🇸 on May 28, 2022
Verified Purchase
I wish he wrote more BuSab books, whipping star is a weird and awesome book, the characters have a sense of humor, and it weirdly reminds me of a hard case crime novel. If you are unsure about buying and reading this book, just do it, you'll thank me later, and, you're welcome 😁
Read more
One person found this helpful
Helpful
Report abuse

albionphoto
VINE VOICE
4.0 out of 5 stars Complex writing from the master of science fiction
Reviewed in the United States 🇺🇸 on March 6, 2016
Verified Purchase
Whipping Star gives you an introduction to Jorj X. McKie (special agent of Busab), to the Busab universe and the mystery of the Calebans. Calebans facilitate inter planetary travel and are mysterious creatures who speak in riddles. Someone is killing a Caleban and it is McKie's job to find out who and why. The book is complex and the writing is dense and the concepts discussed are difficult if you're not paying close attention. It is a thoroughly enjoyable book but to me it serves as an introduction to "The Dosadi Experiment". It's not vital that you read this book but if you are a fan of Frank Herbert and want to read a complex, intriguing book then give this a try. You won't be disappointed but it might give you more of an intellectual work-out than you might expect from a science fiction novel.
Read more
3 people found this helpful
Helpful
Report abuse

Michael Burnam-fink
VINE VOICE
1.0 out of 5 stars Herbert whips and misses
Reviewed in the United States 🇺🇸 on September 8, 2018
Verified Purchase
I read this book because it seemed like The Dosadi Experiment, which I had in paperback, was a sequel. Which is true, but I resent reading this book, and The Dosadi Experiment stands on its own.

McKie is a Saboteur Extraordinary of the Bureau of Sabotage, a strange governmental body which has grown like a cross between a vital hormonal gland in the galactic government, throwing sand in the works of a machinery of government that is too perfect. His vital mission this time is to sabotage the whipping to death of a Caleban at the hands of an evil and supremely rich woman. The Calebans gave everyone else the portals vital to interstellar civilization, and if this one dies, everyone who used a portal will die.

The Whipping Star focuses around communication with the Caleban, who clearly does not perceive space-time in the same way we do, with all the grace of a sophomore physics major in the depths of a DMT trip (trust me on this one). It's not a great premise, and someone with a more absurdist touch, like Harry Harrison, might have been able to pull it off. Frank Herbert misses any joy and wonder in the premise entirely, replacing it with a stale space opera zoo of aliens and a weirdly misogynistic antagonist.
Read more
3 people found this helpful
Helpful
Report abuse

Eric
4.0 out of 5 stars It's about communicating with aliens.
Reviewed in the United States 🇺🇸 on August 19, 2017
Verified Purchase
It's a decent story, and has interesting ideas about communicating with alien intelligences, and the consequences of miscommunication. Another great idea, the organization which the main character works for, was sadly not explored in depth. Hopefully "The Dosadi Experiment" does it justice.
Read more
Helpful
Report abuse

Christopher Z. Dodds
5.0 out of 5 stars GREAT READ
Reviewed in the United States 🇺🇸 on June 20, 2009
Verified Purchase
This story picks up the life of saboteur extraordinary Jorj X. Mckie. He is sent on a mission to save all sentient life in the universe. On this mission he meets and befriends a calaban, a strange multi-dimensional creature who radiates emotion and bleeds purple sparks.
Most of the story is taken up with jumbled conversations between Mckie and the calaban named Fannie Mae. It is at times confusing and for some is enough to put the book down forever, but the diligent reader will be rewarded with a downright heartwarming tale.
Read more
6 people found this helpful
Helpful
Report abuse

Sidney W. Broach II
5.0 out of 5 stars Absorbing prelude to the Dosadi Experiment
Reviewed in the United States 🇺🇸 on April 12, 2015
Verified Purchase
Whipping Star is an interesting introduction to some of the background to the world of the Dosadi Experiment, and the universe of creatures that populate it. If you enjoyed Dosadi, Whipping Star will fill out details of the Calebans. If you haven't yet read Dosadi, this will make that universe more familiar to you when you do (and you should read both). Frank Herbert at his work of building intricate civilizations in a time before Dune.
Read more
2 people found this helpful
Helpful
Report abuse

Avid reader
3.0 out of 5 stars Not as good as dune or the dosadi experiment
Reviewed in the United States 🇺🇸 on November 2, 2012
Verified Purchase
I first read dosadi and realized it was a sequal., finally finding book one I was really expecting so much more. Learning about this world and its speci really appealed to me. No such luck. Its not a bad book, just not the Herbert I've come to know and love. Frankly its nearly all about communication
between two alien races with very different realities.
Read more
One person found this helpful
Helpful
Report abuse

B. Amberson
5.0 out of 5 stars Loved it, of course...it's Frank Herbert
Reviewed in the United States 🇺🇸 on July 8, 2013
Verified Purchase
Can't believe he wrote this in the early 70's. So ahead of his time. Today's sci-fi is clever at best. Frank Herbert was all about big ideas...the kind that make you consider how the universe works, etc. As usual, a great finale with an abrupt end. Read this before you read The Dosadi Experiment...I highly recommend that one as well.
Read more
Helpful
Report abuse
See all reviews

nutcase
3.0 out of 5 stars Oh; it's a star?
Reviewed in the United Kingdom 🇬🇧 on July 8, 2017
Verified Purchase
The spoiler is in the title. The book makes much of something that is disclosed before you have read a single page.
Read more
Report abuse

DM SHERWOOD
5.0 out of 5 stars Wierd
Reviewed in the United Kingdom 🇬🇧 on August 22, 2016
Verified Purchase
Strange (in a good sense) bit of Fiction by the auther of DUNE
Read more
Report abuse

Amazon Customer
1.0 out of 5 stars One Star
Reviewed in Canada 🇨🇦 on December 24, 2017
Verified Purchase
One star
Read more
One person found this helpful
Report abuse

Client Kindle
5.0 out of 5 stars UWO
Reviewed in France 🇫🇷 on August 14, 2018
Verified Purchase
Openly bewildering. And very direct. I loved the superficial unintelligibility, that fosters a more distant unfocused attention. Probably would be considered dated by most, but definitely a period piece, an exploration in the consequences of unwitting appetite for power. Somehow still optimistic, lightly spiritual.
Read more
Report abuse
See all reviews